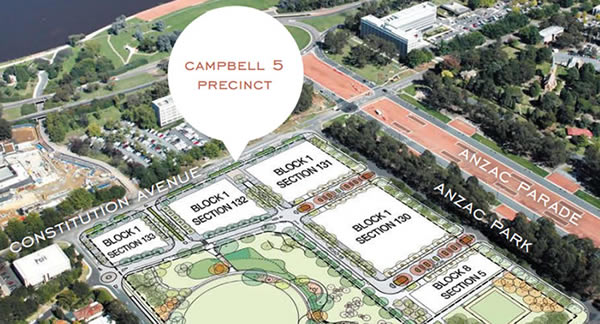 I was listening to 666 this morning as they discussed the section of Campbell up for auction today. Five blocks, located on the corner of Constitution Avenue and Anzac parade were going under the hammer with an expected figure of $40m hoped to be achieved. I must confess, I’m not a massive fan of the developments in and around Kingston and Acton. I mean, they’re cool but I don’t find myself thinking ‘I wish I lived there’, but I had pangs of jealousy for those who would eventually live in this prime little section of Canberra in the future.

The Auction results are now in and according to the Canberra Times, they exceeded expectations by more than 50% and sold for $63.75 million. The LDA has geared the land for development of 528 dwellings and a fancy hotel (well, they didn’t specify fancy but I assume so).

The land was snapped up by a consortium known as SHL Development, consisting of Englobo MD Terry Shaw and a number of other developers with local connections and extensive experience in China.

I am surprised that no one has picked up on the timing of Katy Gallagher’s announcement earlier this week that the Capital Metro Agency are now considering “a new route” which will extend from Civic to Russell, down Constitution Avenue past 3 of the 5 blocks that were auctioned (the other two blocks are only 100 metres away anyhow).
I wonder if the trade-off for the un-anticipated exceptionally high price paid will be a favourable plot ratio for the developers + call-in decision so the light rail extension can be “justified” by the value add theory.

While a great location can only imagine they will be shoddy and hastily built like most new apartments in Canberra, since the government doesn’t care for proper regulation of this industry.

I agree with Canfan. Always loved Campbell. Perhaps I won’t after the new developments!

While a great location can only imagine they will be shoddy and hastily built like most new apartments in Canberra, since the government doesn’t care for proper regulation of this industry.

I just love the area. I don’t dislike Kingston and Acton and enjoy visiting, just never felt the pull to want to live there.

I pick Braddon over either of these areas, provided I could find a modern and comfortable property.

I just love the area. I don’t dislike Kingston and Acton and enjoy visiting, just never felt the pull to want to live there.

I find it curious that you find it so much more attractive than the developments at Kingston and Acton.

There’s no shops and restaurants at that location in Campbell like there are in Kingston/Acton, and it’s a good 25 minutes walk to the city from there.

The views aren’t likely to be as good either, with Anzac Park East and the ASIO building blocking the outlook to the lake.

Pat Gagel - 6 hours ago
Maybe not. I have regularly used the service since 1992. Love it. Still the most sophisticated form of travel. Much better th... View
Marco Spaccavento - 6 hours ago
Pat Gagel I’m not a user. 3 a day also hardly justifies a new station… View
Pat Gagel - 7 hours ago
David Malcolm they aren’t a problem. Believe it or not, biggest issue is a grade crossing on a bend between Bungendore and... View
Property 22