Campese gone for another season 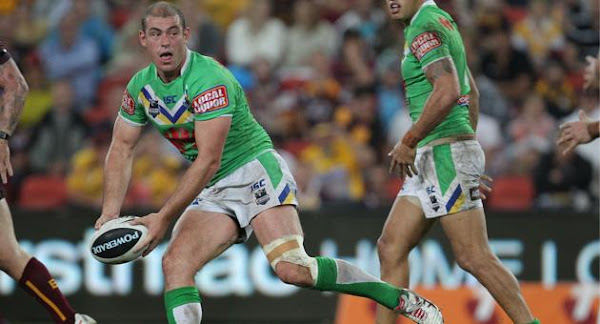 The Canberra Raiders have broken the bad news that star player Terry Campese is out injured for yet another season:

Scans earlier in the week indicated Campese had only sustained injury to his medial meniscus which is a short term injury, but surgery revealed the worst possible news for the Raiders Captain, a rupture to his ACL.

Campese missed the majority of the 2011 season with the same injury.

Raiders CEO Don Furner said the injury was devastating news for the Raiders playmaker and said the club would stand by him in what is a tough time in his NRL career.

“I’ve had the chance to sit down with Terry last night and he’s shattered with the news,” Furner said. “This type of injury has a 10-15 per cent chance of re-occurring and unfortunately requires an extensive recovery period, which he has already recently been through. It’s terrible that he’s facing the same injury twice within two years, but he will be given the full amount of time to rehabilitate. We did discuss the LARS surgery, however, Terry’s long term health is of the utmost importance, and for that reason the traditional ACL surgery was agreed as the best option.”

“The club will stand by Terry in this tough time and ensure he gets the best medical care and rehabilitation. We request he is given time to get over the reconstructive surgery and this latest setback.”

While it’s admirable to stand by their man, perhaps the Raiders need to start planning for a future without Mr Campese?

“Ever heard of Matt Orford you bell-end?”

Campo is a very good player but the Raiders rely way too heavily on him. When he is out the attack becomes very predictable.

Hope he is back soon as even though I am not a Raiders supporter I love watching him play.,

This guy is the most overated and injured player in the history of the Raiders. A careless and lazy player, and the raiders should drop him all together. Harsh but true

Ever heard of Matt Orford you bell-end?

“I reckon if you’re in the beginning or middle of your career then traditional surgery is the way to go, but towards the end LARS is the best choice.”

LARS is always a rubbish choice for an contact sport athlete. Ask Nick Malceski (sic). And, before you espouse again, I had a my ACL reconstructed last year via the traditional way. My highly rated surgeon wouldn’t go near LARS. Short-term gain, long term pain

This guy is the most overated and injured player in the history of the Raiders. A careless and lazy player, and the raiders should drop him all together. Harsh but true

I would have thought that Campese is the perfect candidate for LARS. Most of the cases that have required a second surgery have been after playing on for a few years, and by then Campo will probably have moved on anyway.

With LARS he’s be back in 6-8 weeks and have a solid chance of finishing his playing career, you know, playing!

I reckon if you’re in the beginning or middle of your career then traditional surgery is the way to go, but towards the end LARS is the best choice.

Bad bad news. Does this mean Sam Williams is back at halfback and Josh McCrone shifts to 5/8?

I think he should never have played last weekend. He was obviously on one leg for most of the game against the Tigers and a Brisbane roadtrip was always going to be hard.

If they’d rested him he would have had two weeks to recover for the next game.

Maybe hindsight is 20-20 but Godammit, the Raiders are screwed for another year.

Karin Foxwell - 12 hours ago
Frank Valzano hear hear! As an Art Therapist working with veterans with PTSD I can only imagine how that sort of money could... View
David Stephens - 14 hours ago
But if your head is in the sand you might come a nasty gutser. Moving on has its drawbacks. View
Smackbang - 17 hours ago
What a coincidence - your opinion is also irrelevant, and yet here you are offering it. View
News 7

@The_RiotACT @The_RiotACT
One of Queanbeyan’s oldest ever residents, Linda Moore, died peacefully last weekend at the age of 105 https://t.co/TULostP4NV (4 hours ago)

@The_RiotACT @The_RiotACT
While parents across Australia breathed a sigh of relief when children went back to school after weeks of learning from home, education departments had to ensure schools were COVID-safe. And it wasn't cheap https://t.co/vpuD1LJfd5 (6 hours ago)