I started out writing this story thinking it was going to be somewhat simple. I would remain objective and produce a clear, conclusive argument. Wow, I was wrong.

Being a musician in Canberra, I realised there was no way this story was not going to be affected by my personal experiences. And after doing some research, I’m now more confused than ever.

Before this rabbit hole of self-reflection and self-pity, I could see the Canberra music scene was changing in three key ways. I still believe these changes are affecting how easy it is to make a living off music in Canberra, but there’s a lot more to it.

Big Australian and international acts are marking Canberra on their touring map and, more importantly, are inviting local Canberra bands to feature on their lineups.

Next year, UC Refectory have Ball Park Music in-house, with local indie-punk-rockers Sputnik Sweetheart as supports. Teen Jesus and the Jean Teasers were one of about a dozen Canberra locals who opened Groovin the Moo this year, and the upcoming Spilt Milk festival is featuring our own dream popstars Neko Pink. This means Canberra musicians get to play on bigger stages to bigger crowds and make connections to the wider music industry. Maybe even get paid!

While these big gigs can be a great networking opportunity, and an effective way to spread your name beyond Canberra, maybe this wouldn’t be such a one-off chance if we did live in one of the big cities. Maybe it would be easier to make connections to people in Triple J, or Sony Records or run into Gotye and organise a jam. There isn’t much overarching structure here, so running into and meeting potential collaborators or ‘big names’ is somewhat unheard of. 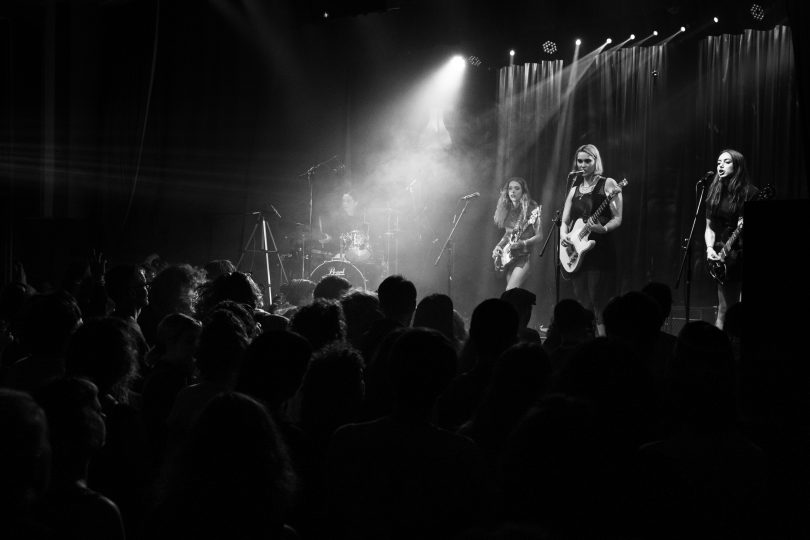 Teen Jesus and the Jean Teasers at The Polish Club.

But I don’t wanna learn how to make posters

In the past couple of years, new management agencies and record labels have popped up and taken on a variety of local bands. Turning Heads Agency started up this year. And then there’s 2410 Records and Black Mountain Records.

Oh wait, and Warm Water. Oh, and I think Lacklustre and Home Brewed are still going. Perhaps we’re moving towards building overarching structures in our music scene, like what Yours and Owls is to Wollongong.

If anything, this shows that Canberra is a place where, if you have an idea, you can actually make it happen.

These structures do help. Managers, bookers and promoters are there for the behind-the-scenes work, meaning artists don’t spend their time learning a billion new skills. It brings with it a network of people who are invested in you, while expanding your contacts in the industry.

But, what about this ‘sustainable music career’ idea? Having this team also comes with splitting the income. With small to zero money in all aspects of the music industry, this sometimes isn’t feasible for emerging artists. 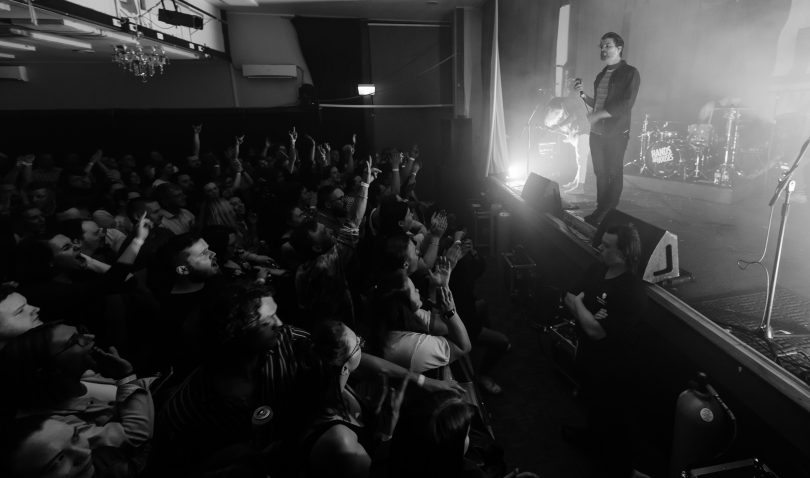 Where, oh where, have all the venues gone?

How do you even make money from music anymore? Gigs. And with larger cities come more venues, bigger venues, potentially bigger crowds and potentially bigger cash. In Canberra, once you get on the UC Refectory stage, there’s not much else a band can aim for. Unless you score a support slot at Canberra Theatre or play at Commonwealth Park’s one-of-three shows a year.

Canberra venues have been doing it tough. A lot of us are still feeling the hole The Phoenix left behind. Smaller towns have smaller, tighter communities. But this also means that, when you put yourself out there, your community gets behind you and, importantly, they pay money to see you play.

Amazingly, it’s not hard to find a gig to play in Canberra. What sideway has achieved in less than a year of existence is impressive. The new owners of The Front are booking shows again. Smith’s Alternative, The Polish Club, The Basement are all Canberran institutions hosting medium to large-scale shows weekly, if not daily.

What Do We Do?

It is hard to define a music career, let alone a sustainable one. There are many definitions of success and many different paths to take. But Canberra truly is a great place to be a musician. If what you want is to play a heap of shows, write music, record and release tunes, tour around the east coast of Australia, then here is the place to be. If you want something more, then maybe Canberra is not quite set up for you.

Regardless, making a living from this industry isn’t simple or clear.

Nick Stone - 58 seconds ago
Pamela Macey It would first go to the Coroner. If they found that if a helmet was worn and could have saved the riders life,... View
Amber Dickson - 15 minutes ago
Someone could design a helmet that fits over a turban View
Paula Jan Loustos - 3 hours ago
I’m sorry but every ones skull cracks the same. Fact. View
News 32

Rick G Rakauskas - 42 minutes ago
canberra has always been RV unfriendly. good to see a positive move View
Steve Smith - 1 hour ago
Neme Blanco not the prettiest, but if it’s budget accommodation.... View
Julie Macklin - 1 hour ago
Steve Smith I have used a Big 4 park too, but only because there was no alternative. More expensive than most other camping g... View
News 95

Glen Rothwell - 3 hours ago
Amanda Lowman same reason they didn't support the banking royal commission. View
Daniel Duncan - 4 hours ago
by the end of the year we will find out View
Robyn Holder - 5 hours ago
Matthew Windebank there are rules. They were broken. Some recipients advertised grants months before they were announced when... View
Lifestyle 14

Anne Littley - 4 hours ago
Also Braidwood book fair is on View
Gary Fynmore - 1 day ago
If outdoor pursuits is your thing I can highly recommend Braidwood Outdoors. Dare I say it but it's a fantastic 'man cave ' B... View
News 49

Roderick Saunders - 18 hours ago
A.j. Knowlsy for residents of streets in Canberra that actually have footpaths .... 🤣 View
Property 1

Iaian Ross - 21 hours ago
About time. Was worried about that demolition ground that has been sitting like a ghost for so long after the crane was disma... View
Opinion 131

Jaanos Eesti - 22 hours ago
It means being thankful that Australia allowed my grandfather and mother to settle as refugees after WW2 and not wind up in S... View
show more show less
*Results are based on activity within last 7 days

Each year as Australia Day approaches, I find myself feeling more and more uneasy about the celebration of the holiday...
News 114

It's been revealed that the large air tanker which went down Thursday afternoon with the loss of all those aboard...
News 32

The state of all-ages music in Canberra

Why is it so important for the community to support local music?

Why your favourite band (probably) doesn’t tour to Canberra

@The_RiotACT @The_RiotACT
@BayldonAg is a #Queanbeyan success story thanks to its home-town loyalty & drive to support its customers + community https://t.co/vzKID9CBEo (2 hours ago)