Can you think of any awesome names for the new Canberra Light Rail Vehicles? 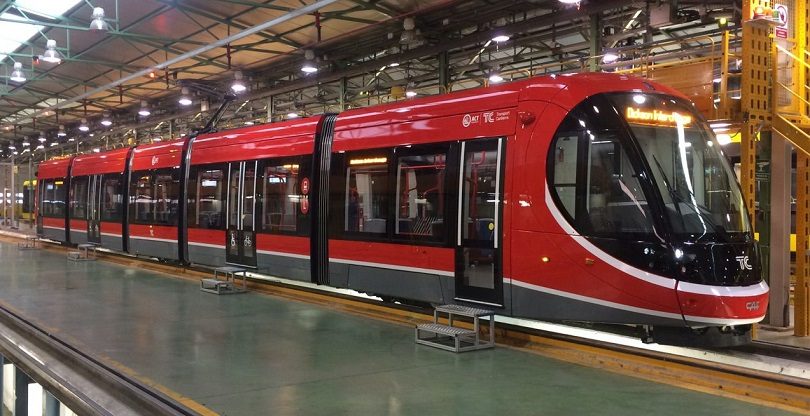 OK, I admit I’m a bit of a light rail nerd. Having studied mechanical engineering before I ended up working in politics, the design, scale, and durability of rail transport has always been attractive. The prospect of the first line of the new Canberra Metro Light Rail Network opening next year is exciting for lots of reasons, including 14 shiny new red Light Rail Vehicles (LRVs).

As one of the new vehicles is already on its way to Canberra from their manufacturer in Spain, it won’t be long before we see it running up and down Northbourne Avenue, past the gridlock during the morning and afternoon peak hour traffic. RiotACT readers and everyone you know, time to put on your thinking caps and think of some sexy names for Canberra’s new Light Rail Vehicles (LRVs)!

Like all big LRV nerds in Canberra, I consumed all the information provided by ACT LightRail up to and including their transformation into The Public Transport Association of Canberra, led by the inimitable Damien Haas. The PTCBR Facebook Group recently reported that our City’s journal of record wrote a short article encouraging its readers to participate in a poll of possible names for Canberra’s new LRVs. However, like a few PTCBR fans I was disappointed with the odd name suggestions and the small number of survey responses to this online poll.

So here you go Canberra, this is your second chance to contribute to this important public discourse! What do you and your friends and family think the new vehicles should be called? Remember, these LRVs will eventually be part of a city-wide network that will probably eventually carry millions of people and certainly outlive all the current Canberra Times readership. We will present the winning name in this poll to someone in the ACT Government and formally request it be included in their consideration for the name of at least one of the new trams. 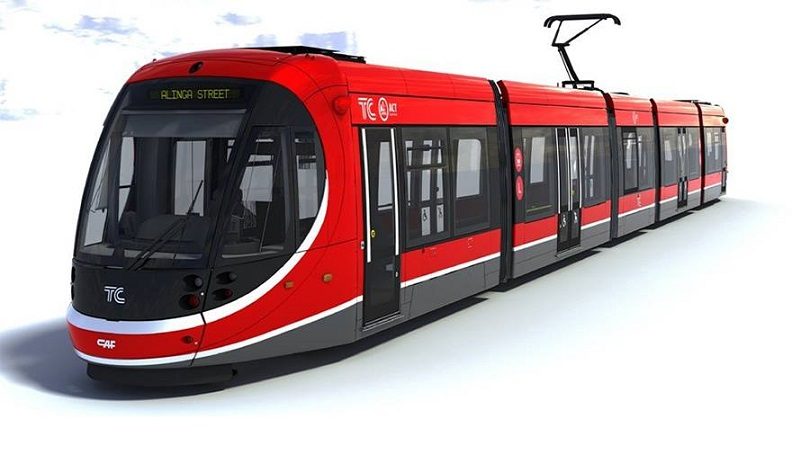 An artist’s impression of one of the new Canberra Light Rail Vehicles. Photo: Supplied.

It’s getting late on a weekend. So far our writer has had three homebrew beers and has come up with these suggestions below… (and admits to stealing a few from the PTCBR Facebook page).

(If you have any other name suggestions please include in the comments section below).

The Canberra Times survey for suggested names of the new Canberra Trams received 620 votes by the time the poll closed. We hope to get more votes and funnier suggestions via the RiotACT readership. If you have any better suggestions, please include them in the comments below and in the RiotACT facebook comments. If your suggestions are awesome enough our editors will amend the poll to include them as well. The writer has also promised to do a follow-up story with anyone who has a hilarious suggestion and is also nerdy enough to join him for a close-up when the first LRV arrives in Canberra in a few weeks.

Elias Hallaj (aka CBRfoodie) is a part-time food blogger and a full-time political staffer who has joined RiotACT as a regular contributor. All his opinions about LRVs are his own. As an aspiring food writer he hopes that one of the new LRV’s will eventually be converted to a travelling restaurant or food truck (or food train?). If you have any tips or feedback or advice about light rail or food around Canberra you can add a comment below or find him most nights on Twitter @CBRfoodie.

51 Responses to Can you think of any awesome names for the new Canberra Light Rail Vehicles?
Filter
Showing only Website comments

I think that all the trams collectively should be called BIMBI or BADYAN (Ngannawal words for bird/birds). Then the individual trams could be given Ngannawal bird names like Bunduluk (Rosella); Galu (Crane); Guginya (Kookaburra); Gang-gang (Gang gang parrot); Giliruk (pee wee); Karrungang (Magpie). And please remember to ask first…

btw Can we make ALL our Public Transport the same shiny poppy red?

You can see them coming a mile off and they add a lovely dash of color to an otherwise dreary city. I can dream I am still in London or hiking through gorgeous Danish spring countryside.

La belleza roja would be more correct but then gender is no longer relevant, is it.

I propose 5 names: Amanda Bresnan, Meredith Hunter, Caroline Le Couteur and Shane Rattenbury, without whom trams would not have been an issue at the 2012 election, and Katy Gallagher, whose government (a) sent Infrastructure Australia an analysis that showed that bus rapid transit would be a much better investment than light rail, (b) copied the Greens policy, and (c) kept its analysis secret until 9 months after the election.

Who knows, Katy may even end up driving one of the trams if she loses her Senate seat.

My suggestion is BuzzLight rail.

How about “Still drive your car”

Julie Macklin - 8 hours ago
Tim McMahon Road worthy checks! When was the last time your car had a road worthy check? It's been years since any car of min... View
Tim McMahon - 11 hours ago
let’s put rego and insurance on these bikes as well as road worthy checks every year just like cars trucks and everything e... View
Colette Robinson - 16 hours ago
Adrian Fui Fui Moy but the path *is* being used for racing. Pedestrians and slower cyclists in either direction are merely ob... View
Opinion 171

Phil Cowan - 11 hours ago
The 26th Jan is a Public Holiday because on the 26 Jan 1949 because we ceased being British subjects and became Australian ci... View
ghutch - 21 hours ago
A lot of good comments. Why don't we celebrate Oz Day on 1 Jan. Yeah I know you all still asleep from new year eve. But is th... View
Jenny McInnes - 21 hours ago
David Johnson it most likely was a public holiday there then View
Property 10

Peter Curtis - 18 hours ago
It is $500m not being spent on anything else but a dubious project to say the least. Ian tries to explain it all away as acts... View
Breaking 2

Peter Curtis - 18 hours ago
Not to sure what a "Canberra mentality" would be but as long as we surrender the principle of solidarity for the belief that... View
Food & Wine 1

Jackie White - 22 hours ago
Thank you. I never walk around the lake with headphones precisely because of the risk of collision with a cyclist View
James Messervy - 22 hours ago
Jackie White no, I always ring my bell or call out.... View
Community 7

Susanne Jennings - 22 hours ago
Great to see it so successful- well done! View
show more show less
*Results are based on activity within last 7 days

Who would have thought that Canberra's Nick Kyrgios would morph from tennis brat and national embarrassment to statesman of the...
News 19

Key numbers and milestones to remember ahead of light rail launch

@The_RiotACT @The_RiotACT
In a variable climate, what white wine will deliver for local vignerons? It's looking increasingly likely that fiano might be the answer https://t.co/Nh585IF3nO (1 hour ago)

@The_RiotACT @The_RiotACT
Have the voices of post-Vietnam veterans been missed in the fight over the War Memorial expansion? Some veteran organisations say yes https://t.co/UC34DwlGFC (15 hours ago)