Canberra, 5kms at a time 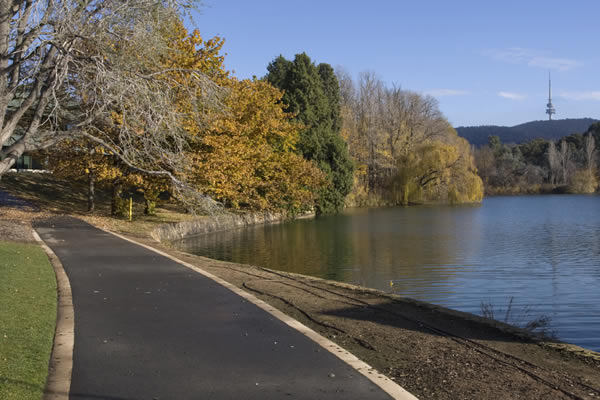 One of the many great things about Canberra is its ability to show you something you’ve not seen before. This is what happened to me when I joined a running group last year. Now before you switch off right there, bear with me. I’d grown up on the South side of Canberra and moved to the North as a mortgage-toting adult. When I joined my running buddies – a group comprising women from all over Canberra – I was suddenly exposed to places I’d not been or not thought about. Now, this could also have been because as an ex-fat-person (please, I mean no offence by that term) I’d not traditionally had ‘places for a good walk or jog’ on my radar.

So I thought I’d share a couple of my favourite places to clock up 5kms. While it might seem overwhelming to a starter, 5kms is not so far. It will take you an hour if you’re walking at a decent clip, longer if you’re strolling, longer still if you have small children with you.

This popular classic takes you around the water’s edge, past a pile of places of ‘national’ significance and offers a chance to appreciate how lucky you are to live here. The path is wide and flat all around (except for ramps on/off the bridges) and you can often watch Canberra rowers in action on the water. There is parking on both sides of the Central Basin. I like to park near Questacon and start from there, which means that at the end of my run I’m very close to the lakeside coffee shop – a kiosk really – that does a roaring trade. There’s also a coffee cart on the other side of the lake, and plenty of public toilets. Other stroller friendly options include Lake Ginninderra (6kms), Lake Tuggeranong (6ish kms) and Yerrabi Pond (4kms). If you’re seeing a theme here, you’re right- lake paths in Canberra are well-maintained and there are amenities close by.

I’ve narrowed this one down to Mount Ainslie because it offers a great butt-workout and gets the heart rate going for those of us who want to push it. A more leisurely climb is still a good workout too – don’t expect to be able to manage it without a little bit of heavy breathing! I think the best approach is to park behind the War Memorial and hit the trail from there. Speaking of, the trail is a combination of steps and slopes and it is impossible to lose your way. Not the least because this is also a popular climb and you’ll have company at some point. Actually, now that I think of it, I’m not sure this one is actually 5kms, it might be less. But you know it really doesn’t matter because the view from the top is pretty great and the trip down is a breeze. The War Memorial Café is a good spot for a post-climb coffee too. Other climbs I like are Mount Taylor (you can go from the Sulwood Drive side or the Athllon drive side, I reckon the Mount Taylor one is shorter), and there’s also Black Mountain, which is steeper – try Mount Ainslie first!

If the Lake ain’t pretty enough for you, try the Aboretum. You can design your own trail here, with a number of paths and roads to choose from. Be warned – there are hills! You can avoid the steepest by choosing a path that winds around rather than up or down. Also use caution if you’re on the roads – cars and walkers/runners don’t mix. The view from here is sensational (it warms this Canberra girl’s heart) and there is one lookout a little way up the hill that is worth the extra effort. This place will just get more lovely in coming years and you feel like you’re miles from anywhere. There’s the obligatory coffee shop up top, but you do have to pay for parking. My other favourite scenic route is the Botanic Gardens – again design you own route, there are plenty of paths, some of which are fairly undulating. My pick there is the Rainforest Gully part, a beautiful way to cool down. Westbourne Woods (Yarralumla, park at Weston Park and head to your left with the lake on your right) is also a cracker – pretty much anywhere around LBG is lovely (with the exception of the Kingston Foreshore).

I admit to selecting this one as my favourite mostly because it’s local (for me), and partly because I haven’t done as many trail runs as I would like. The other thing I like is the wide fire-trails – a few routes to choose from – and the fact that it’s quite open. It’s lovely bushland rather than pine-forest, so I can always see well ahead of me and never feel like I’m going to get lost. You’ll often have to share the trail in parts with kangaroos, so if this makes you nervous maybe think again. There is parking at Amy Ackman Drive and clearly marked trails – with distance markers, so again you can choose your own adventure.. You can also take a longer jaunt by heading towards Goorooyarroo Nature Reserve off some way to the right. Nearby Forde or Bonner shops have coffee options for afters. I also like the trails at Isaacs Ridge – where it is easy to stick to the flats if you like, and for less-flat options try Jerrabomberra Nature Reserve at the back of Jerrabomberra. Red Hill – I go from the Garran side – is also a winner and not too steep.

Canberra being what it is, you can download maps from TAMS for a lot of these routes.

6 Responses to Canberra, 5kms at a time
Filter
Showing only Website comments

I really love the Pinnacle nature reserve (last time I was there I spotted an echidna!) and Mt Painter.

Went for a walk there today to answer my own question. Cycle path doesn’t do a loop of the Acton penisula anymore. Is possible to cycle carefully on a mountain bike I guess.

Anyone looking for an opportunity to run/jog/shuffle 5km on Saturday mornings with the support of a group should check out Parkrun, which operates at the three above-mentioned lakes.

Ahhhh, of course. Last time I was there, you could no longer cycle the Acton Peninsula loop because of a new building built across the bike path. Has that been “fixed”?

The picture is taken behind the museum in Acton. Great 5km run track.

Trying to place where this photo was taken and can’t help but think the image is reversed!

Heather Purvis - 8 hours ago
It can also depend on what subjects/electives are being offered/are available to the students - those seeking specific subjec... View
Connie Kaltoum - 10 hours ago
Hmmm. But I believe they do choose to contribute a fair bit out of their pocket ..... View
Jackie Fuller - 10 hours ago
Wealthy......some ppl are "far" from Wealthy. We just want better for our kids!...and will make sacrifice in other places Pri... View
News 26

Darcy Ryan - 9 hours ago
Meanwhile business owners and landlords are looking to abandon Canberra due to scandalous high rates and land taxes. Cmon lab... View
Eddie Majcic - 11 hours ago
Harm and abuse against someone's will, whether it be physical or emotional or something else is well covered in current legis... View
Russell Nankervis - 11 hours ago
I have seen no evidence of that from safe schools. View
Sport 9

Louise Hoffmann - 9 hours ago
Grew up playing softball with Lisa and Katrina. They were both very talented at what ever sports they played xx... View
Madeleine Powell - 10 hours ago
Of course. It would very un-powell not to haha View
Nicole Harrow - 10 hours ago
Carolyn Brassil thanks Cazza View
News 6

Guy Randell - 1 day ago
Peter Chamberlain hey Pete, I thought the stands were able to be retractable at AIS. Pity would be a Cracking venue.... View
Community 6

The $500 million Canberra Hospital expansion project that will deliver the new eight-storey emergency, surgical and critical healthcare building is...
Opinion 26

@The_RiotACT @The_RiotACT
Meet Stevie, a super enthusiastic pooch who is ready to step out of the @rspcaact shelter and into a new forever home https://t.co/S8QW1yHa7M (11 hours ago)

@The_RiotACT @The_RiotACT
Looking to upsize? This corner-block property with four bedrooms + spectacular views could be the ideal place to call home https://t.co/UctSZNgD5B (12 hours ago)