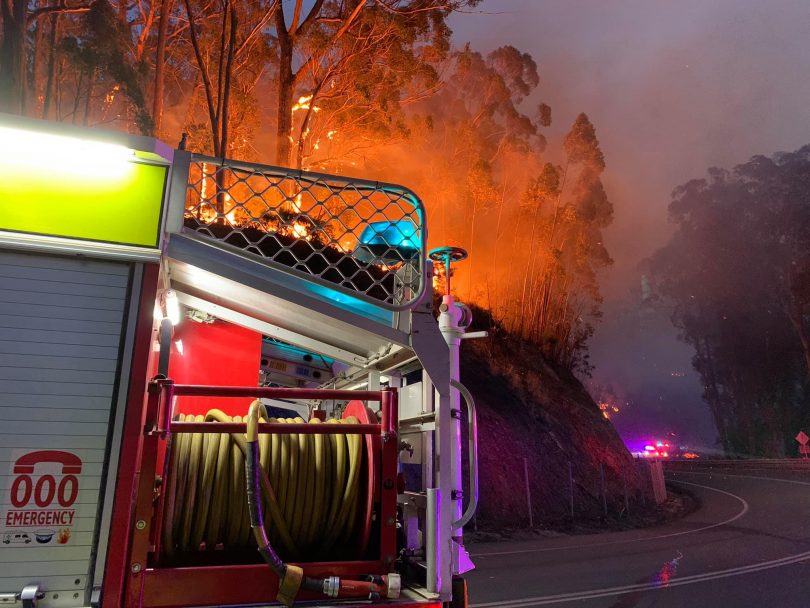 The Currowan Fire near Government Bend as firefighters battle the blaze. Photo: Queanbeyan Fire and Rescue.

A total fire ban has been declared across the ACT and the south-eastern NSW region from midnight tonight (Friday, 27 December) to midnight Saturday, 28 December.

The fire danger rating in the ACT will be set at ‘Very High’ as the Bureau of Meteorology is forecasting a hot and dry day with a top temperature of 37 degrees. The smoke haze will also remain in the region.

Windy conditions are also being predicted and the Emergency Services Agency (ESA) says any fire that starts could spread quickly and may be uncontrollable.

The Kings Highway will likely remain closed for at least the next month as bushfires continue to threaten the area and inhibit road work efforts.

The Monaro Alpine, Southern Ranges and Southern Slopes regions, which includes Goulburn Mulwaree, Yass Valley and Queanbeyan-Palerang, are also under total fire bans on Saturday, starting at midnight tonight. The NSW RFS has set the fire danger rating at ‘Very High’ in these areas as well.

A number of parks, reserves and campgrounds across the ACT will be closed, including the Namadgi National Park and Tidbinbilla Nature Reserve. The visitor centre will remain open.

A full list of closures is available at www.environment.act.gov.au.

There is also a ban of naked flames across all of ACT Parks and Conservation Service’s managed estate, excluding Cotter Campground until the end of March 2020.

Residents in bushfire-prone areas are being told to enact their bushfire survival plans or put a plan into place if they do not have one.