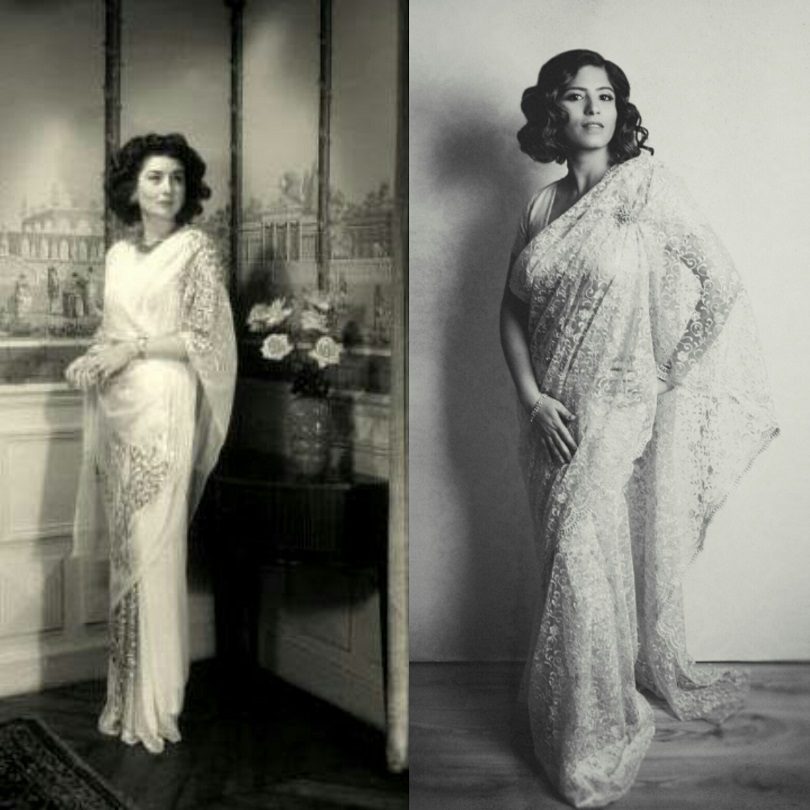 In the spirit of honouring iconic, inspirational women, a few local Canberra artists embarked on a project to recreate the fashion of legendary style icon Princess Begum Sahiba Niloufer Khanum Sultana Farhat of Hyderabad, India. Born in 1916, Princess Niloufer was not only about the clothes, but she was also a highly regarded advocate for women’s advancement and a fierce public speaker who was even offered several Hollywood movie roles. 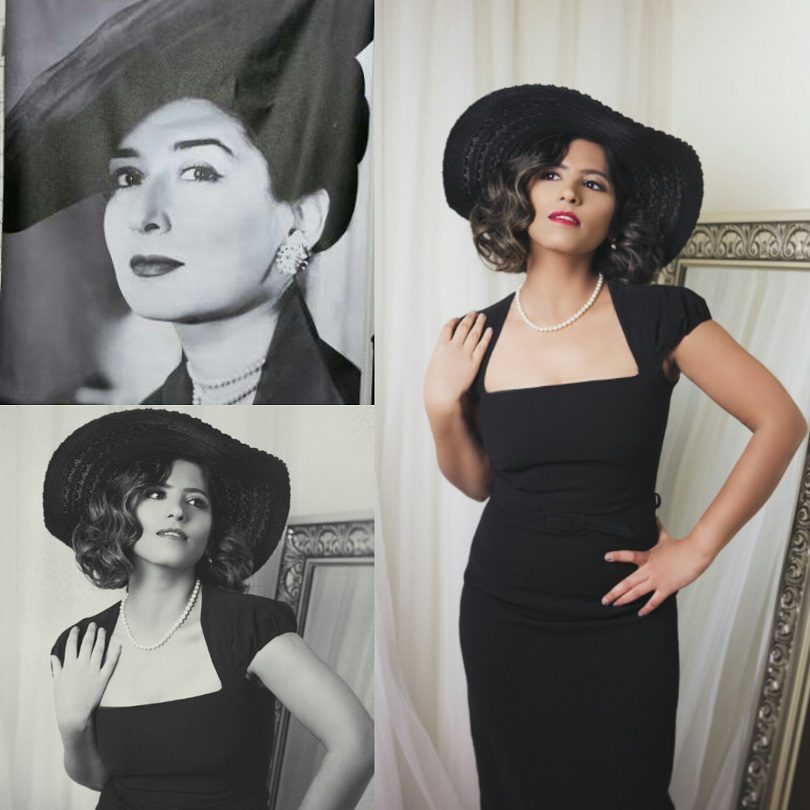 Princess Niloufer’s clothes have been displayed in the Fashion Institute of Technology in New York. Not only did she garner much attention for her custom-made sarees from India and France, but she was also well-known for incorporating French vintage textiles with Indian traditional attire. She would place embroidery, coordinate colours, themes and patterns to every detail. Her unique personal style was one of the many talents that earned her the reputation of an international style icon. Princess Niloufer later died in Paris in 1989. 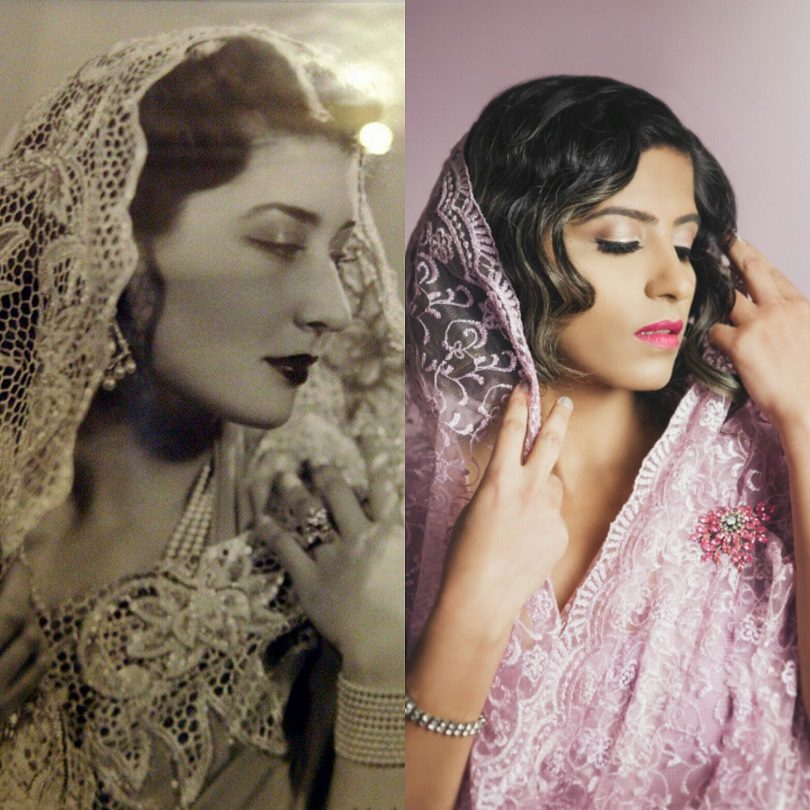 The idea to come together for a photo shoot to re-create some of Princess Niloufer’s ‘looks’ happened when Archana Milani went on a holiday to India and listened to her Mum vivaciously tell a fascinating story about the princess. On returning to Canberra, Archana took the concept to a couple of local artists who brought the vision to life. Her mother, Madhu Milani made 2 sarees and a colourful dress while Archana acquired specific pieces from friends and rummaged some of the local markets like Canberra Fashion Market and Old Bus Depot Markets for additional stylish pieces for the shoot.

The beautiful images were captured by local photographer Alex of True Beauty Design, the hair and makeup artist was Sarah of Makeup by Sarah Tahir. The Princess Niloufer-inspired outfits were modelled by Archana Milani.

Have you ever attempted re-creating the outfits of an icon you admire? Let us know in the comments below.

Special thanks to Nina Gbor! Thanks x

Thanks Naveen! We were a great team. Alexandra Wetzel Sarah Tahir really worked hard with me to pay this tribute to Princess Nilofuer!!! Hats off guys...

Nina Gbor lovely photography!! Looking for more from your team!! 👍👍

Thanks Reenu Chauhan Katoch for such lovely comments! It wouldn't have been possible without Mumma Madhu she made the Saree, Alexandra Wetzel for capturing the image for bring the vision to life and Sarah for doing the hair and make up! It took about 6 months research and collabration to put this together and we had to keep it a secret. It was so hard and I was so tempted but it is finally out. I am glad with the results. I really hope we have done justice to the Princess!

Acton - 21 minutes ago
Maybe you are right, but I was under the impression that shareholders bought shares in the hope that their price would go up.... View
News 3

rurallife - 25 minutes ago
Not everyone in Wallaroo has had a gutfull and feels the way these people do. Maybe call on all the neighbours and get everyo... View
BM - 4 hours ago
That should read... six, sometimes seven DAYS a week - from as early as 6:00 a.m. and often through to 6:00 p.m. - often at 9... View
BM - 5 hours ago
Yet another ACT Government policy disaster. The Government won't accept ENM and charge a fortune for accepting VENM. This all... View
News 15

bj_ACT - 2 hours ago
Can you point to why inner Canberrans are subsidising outer suburb Canberrans? The analysis I have seen has shown the opposit... View
brianf - 2 hours ago
I'm sorry Jam but successive auditors reports have failed to find any evidence of these supposed windfalls, and the whole bus... View
jam - 3 hours ago
sure, but a lot of revenue will be brought in from the land tax/rates on the denser developments justified by the light rail... View
Food & Wine 1

Capital Retro - 4 hours ago
Has the ACT Government ever actually repaid any of the huge loans it has taken on? My information is that it "rolls them over... View
thoughtsonthesubject - 5 hours ago
I am wondering whether Standard & Poor's is aware that the greater part of the infrastructure project - namely some $2 to 3 b... View
News 6

chewy14 - 5 hours ago
I'd be happy if they replaced the term "colonisation" but it shouldn't be replaced with something so undefined as "reconcilia... View
jwinston - 6 hours ago
Yet again more meaningless legislation that less than 1% of the care about. Fix the hospitals and education before implementi... View
show more show less
*Results are based on activity within last 7 days

@the_riotact @The_RiotACT
Canberra-based company @RandSNewsfeed has successfully listed on the #ASX, demonstrating the strength of the ACT's growing technology sector https://t.co/S90Eqep4K8 (30 minutes ago)

@the_riotact @The_RiotACT
A proposed amendment to the ACT's public place naming legislation could see the word #colonisation replaced with #reconciliation if it passes next year https://t.co/QwavXiPMg3 (2 hours ago)