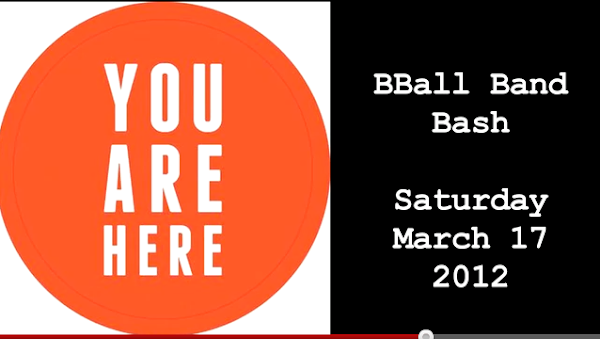 This Saturday the old Toast Courtyard (above where Electric Shadows used to lurk? Erm.. current reference… up the stairs from the Indo Cafe!) plays host to four of Canberra’s most accomplished bands AND a prison rules basketball comp between the bands.

This madness could, of course, only be the product of You Are Here:

Triple J Unearthed winners The Ellis Collective, Waterford (who have released new album ‘Say OK’) Groovin’ The Moo and Foreshore crowd favourites Fun Machine and Super Best Friends (who have supported Children Collide and Regurgitator) are famed across Canberra and beyond for their amazing live shows. While their musical abilities are beyond doubt, it is time for us to put them to the ultimate test and see which of them is the best at… BASKETBALL! FOR NO REASON WHATSOEVER! B-Ball Band Bash (Prison Rules) will see the bands face off against each other in three on three basketball matches. Two bands go head to head with the loser playing a set until one band is crowned the basketball champion – that is if they can defeat our SPECIAL GUEST TEAM (who may or may not be the aliens from Space Jam).

Adding to the fun the bands have started releasing smack talk videos.

The Ellis Collective provided this effort:

And what else would we expect from Fun Machine:

Waterford have stuck to highlighting their own skills:

We’ll find out on Saturday who’s the best b-ball team. But who do you think has made the best video?

I love that there are six people in The Ellis Collective, Matty Ellis has voted twice, and they have four votes.

Do they get to put safety pins in their wristbands?

I keep hitting refresh but The Ellis Collective’s votes stay the same.

There’s my sympathy vote for you, Mr Nut.

I personally fear your Collective will get toasted like a bagel.

I keep hitting refresh but The Ellis Collective’s votes stay the same.

And I am not a member of the said band….

I know all those words, but that doesn’t make sense.
Lisa Simpson

Well no – it appears The Ellis Collective got their shared mum and dad to vote. or are too busy training.

Also judging by those votes, the ellis collective aren’t even good enough at basketball to have access to the internet.

we are _the_best_ at modesty in self promotion.

Yes, you can do quite likeable Fun in several ways but do you not have any modesty on the self-promotion front??

So who has placated the Waldorf residents on this occasion? Better watch out that you don’t “affect the general amenity of the area” and get kicked out of the space.

Yes I’m still bitter about Toast’s closure. But it wouldn’t surprise me if the same whingers got up this event for causing them a little bit of inconvenience.

Acton - 34 minutes ago
Kids need routine and structure in their schooling and when that is removed their education will suffer. Home 'schooling' wil... View
Mary Beveridge - 2 hours ago
Many children across the world missed many years of schooling due to wars, it will be possible for most of them to catch up a... View
Jessica Kate - 2 hours ago
Anni Ingram 😂 hope you’re all good love xx View
News 46

Tara Maree McInnes - 1 hour ago
Glad I got stuff yesterday View
bryansworld - 13 hours ago
Some of those suburban supermarkets are a shocker. Narrow aisles, and plenty of people that just don't get (or don't care abo... View
Kriso Hadskini - 14 hours ago
I took one look at the q at Coles this morning and walked out the other way...rather go without. View
News 1

jima - 3 hours ago
Could have told you this sort of thing would happen when it was sold 20yrs ago. Privatisation at its best. View
News 16

Paul Dowden - 3 hours ago
Laurence Kain I was there. View
Best of Canberra 3

David Soininen - 5 hours ago
They should be working Monday to Friday like the old days . View
John Hynes - 13 hours ago
MB Miyagi or throw matches for bookies like India has done View
MB Miyagi - 13 hours ago
John Hynes or spending more than they are allowed to like Carlton did 😃 View
News 34

John Dale - 13 hours ago
Yep, great idea. I don’t see even one appeal coming out of this. Not one. No, seriously. View
Food & Wine 2

Chris Jones - 16 hours ago
Parenting is one thing. Teaching at the same time and also trying to do your own job so you can get paid and actually provide... View
show more show less
*Results are based on activity within last 7 days

Canberrans have been warned not to become complacent and that they are in for a long campaign against COVID-19, as...
News 0

Baking sourdough bread has proved to be the perfect starter for chef Frankie Bodel, who lost her job last week....
News 46

@The_RiotACT @The_RiotACT
Pleas for Canberrans to stay away from regional NSW ramp up as the Easter long weekend approaches https://t.co/DrDxiMmHNi (49 minutes ago)