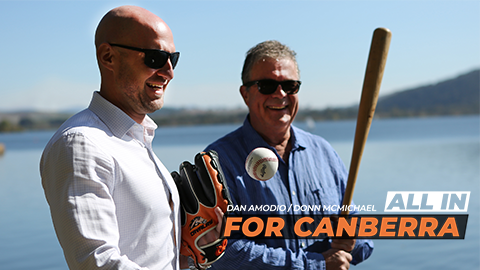 The Canberra Cavalry can now truly be known as ‘Canberra’s team’, after two Canberra men joined forces to become the new owners.

The men who have been running the Cavalry for the last few years while being employees of the ABL, Chief Executive Donn McMichael and General Manager Dan Amodio, will head an ownership group with the backing of local community member investors.

Canberra Cavalry announced on Tuesday morning (1 May) that the Australian Baseball League licence for the Cavs had been acquired by the Canberra duo.

Mr Amodio said the ever-growing Cavalry community was one of the many driving forces behind their decision.

“The vision of our ownership group is to keep giving back to this community of people who have built this club into what it has become,” Amodio said.

“Our members, staff, sponsors, players and coaches, and everyone else in the Cavalry community have created a very special energy around this club.”

The Canberra duo wanted the Cavalry to stay as “Canberra’s team” after the 2009 “Let’s Do It Canberra” campaign was a driving force behind the Cavalry being a part of the new ABL.

The Chief Executive said he believes the campaign set the foundation for an ABL team to be 100% owned by the people of Canberra.

“The Let’s Do It Canberra! Campaign back in 2009 set the Cavalry’s destiny to be owned and run by the Canberra community,” Mr McMichael said.

“We would also like to acknowledge the ACT Government, in particular, the Minister for Sport Yvette Berry, who has been a driving force behind the Narrabundah redevelopment, and a passionate supporter of the Cavalry since day one.”

Following the announcement of work beginning on Narrabundah last month, Amodio believes season 2018/19 will be one of the most memorable in the Cavalry’s history.

“We will have a newly renovated ballpark to celebrate in and we have some big visions for what this club can become.”

When the Australian Baseball League stops saturation advertising of gambling during game broadcasts, my wife and I will come back and buy season tickets again to the Canberra Cavs. We love the game, we love the team and the local field at Narrabundah, and the culture. But promoting gambling to a market with a large youth demographic harms the future of the sport and our community. Just ask Pete Rose.

Simon Wheaton - 20 minutes ago
Reading reports from back then, he was even dodgier than our current politicians! View
Lifestyle 16

Jennifer Brodie - 23 minutes ago
Are they selling tulip bulbs this year ???? View
Suzanne Mansfield - 6 hours ago
Karina Curwain rats and damn! View
Dawn Glover-Schwalm - 7 hours ago
Til Bijou me too!! View
News 32

Dave N Ange Greer - 5 hours ago
Why is there no comparable list of Queanbeyan region sports stars....? Also how many James Bonds have come from Wagga 🤣 View
Dong Wong - 5 hours ago
look at the face on the dog hahaha View
Alan Byrne - 5 hours ago
Keni Kawaleva all day bra View
News 222