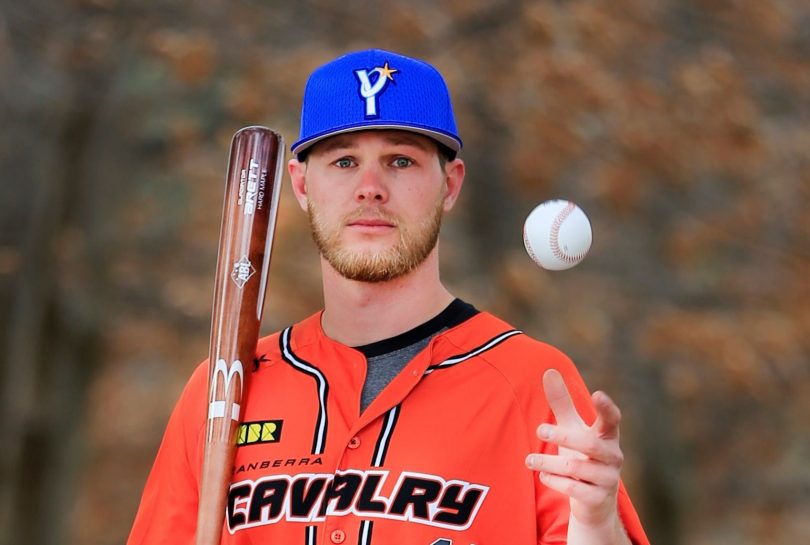 Canberra Cavalry’s Kyle Perkin said there has never been a more exciting time for Canberra baseball than this season. Photos: Supplied.

Canberra Cavalry catcher and local product Kyle Perkins has been a part of the Canberra Cavalry team since the side was born in 2010 but believes the side now has the missing puzzle piece to bring the Claxton Shield back to the nation’s capital for the second time.

The 27-year-old has seen many people come and go and many things change over the past eight years, but with a new ownership structure, a redeveloped ballpark, and a partnership with a Japanese baseball powerhouse, the Cavalry are poised to make a charge for the title.

The Cavalry finished runner-up last season, losing a heartbreaking Championship series 2-1 to the Brisbane Bandits who claimed a historic three-peat but the Cavs will look to go one better and kick the Bandits off their perch with the help of their new recruits.

“Anytime we can bring high-quality players into the Canberra Cavalry to join our already strong force, is a fantastic opportunity for us to do really well in the ABL,” Perkins said. 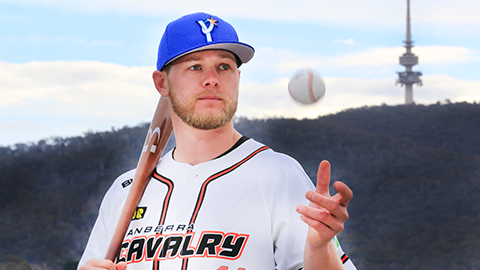 “The Nippon Professional Baseball (NPB) is super strong and it is as strong if not stronger than the MLB at this point in time. The Japan national team is number one in the world so we are expecting some pretty high calibre talent to come to Canberra.”

Two Baystars imports will play for the Cavalry next season but it remains to be seen which players will make a home in the nation’s capital before the first pitch is thrown in mid-November.

Perkins said the last eight years had been a “long road” for the club but said they are in a “really good place” heading into the ABL’s ninth season.

“Depending on who they send, it could really strengthen our team,” Perkins said. “We are already a strong unit because we recruit very well and we are always competitive on the field, so any help that we can get from the partnership is awesome for us.

“The redevelopment is going to make the atmosphere that much better and this partnership is hopefully going to draw more people to come out and watch us and back us to win the Claxton Shield.”

Paula Simcocks - 20 minutes ago
Looking back in times of war and crisis people loved the fun of live shows, music and drama. Lifts spirits, usually doesn’t... View
Lindy Edwards - 7 hours ago
Nanna was reciting Yeats as fires approached her place. And a he'll of a lot of people are going to be singing, drawing and w... View
Josie White - 12 hours ago
I think that the arts have a role to play in alleviating community anxiety and providing some relief from the stresses and to... View
Opinion 14

Malcolmo Oz - 47 minutes ago
Felicity Jane Good comment - very insightful and forward thinking View
Shane Murphy - 2 hours ago
Anura Samara my point is that people are happy to protest in Australia because there are few consequences in doing so. Not so... View
Anura Samara - 3 hours ago
Shane Murphy silly comment. As Australians we can influence the debate in Australia. And an Australia with strong and effecti... View
Opinion 9

Anura Samara - 2 hours ago
Rick Reeks debunked by evidence. Yes, I know it's inconvenient when that happens! View
Paul Kitson - 2 hours ago
I agree Robyn. I went to see him at ANU talking about the ACT climate change strategy. I found him engaging and pragmatic. I... View
Rob Thomas - 2 hours ago
Rick Reeks - expert Professor Ross Bradstock, the director of the Centre for Environmental Risk Management of Bushfires at th... View
News 30

Julie Maynard - 2 hours ago
Tania Shaw I’m going buy what I owe compared to my friends. Yes, I did add up the cost you mentioned and I’m still ahead-... View
Stuart Herring - 6 hours ago
A mortgage is almost guaranteed to be cheaper than renting the equivalent property - after the first couple of years. Because... View
Gill McGill - 6 hours ago
Corey Karl yep! And pay for other people. 🤷‍♀️ View
Community 22

Get to know your Cavalry: Q&A with Robbie Perkins

Get to know your Cavalry: Q&A with Kyle Perkins

Canberra Cavalry a baseball team Canberra can call its own: Steve Kent

@The_RiotACT @The_RiotACT
Good news for Canberra cricket fans with the ACT Meteors heading into a streak of four home matches https://t.co/E2C3ZnO8Us (1 hour ago)