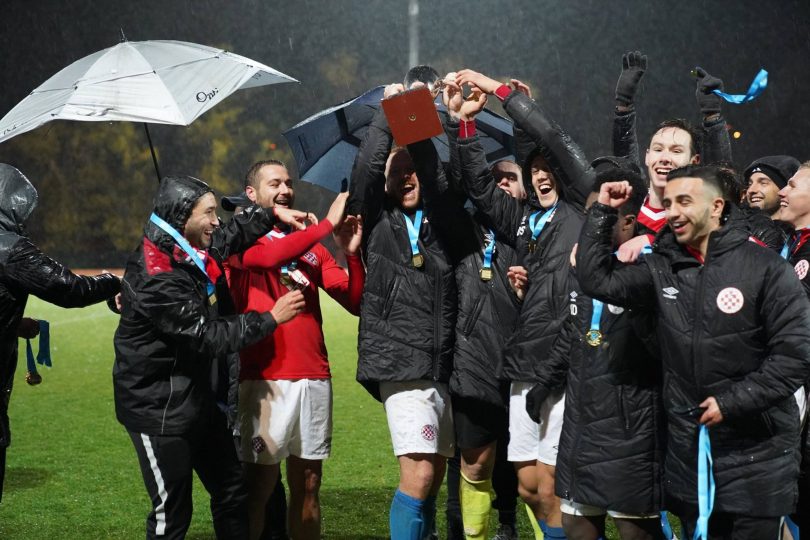 Paul Macor said making to the national stage of the FFA Cup had given a boost to the whole club. Photo: Supplied.

Canberra FC has been drawn to face Broadmeadow Magic in the 2018 FFA Cup round of 32, avoiding a clash against an A-League club.

Paul Macor’s side will make their FFA Cup round of 32 debut against the Newcastle based club and will host the match at Deakin Stadium.

Macor said he was relieved not to face an A-league club and admitted knowing little about their opposition.

“I feel pretty good about the draw, to be honest. I did a bit of research this morning because I did not know who Broadmeadow Magic was,” Macor said.

“Regardless of what we know of them, we’re looking forward to the challenge of taking them on.”

The Magic currently sit top of the Northern NSW Football National Premier League by a point and are regular contenders in the FFA Cup. The Newcastle club made it to the round of 32 for the fourth time, which Macor believes gives them an edge in their clash.

Macor said Canberra FC making it to the national stage of the FFA Cup had given a boost to the whole club and there was definitely a spring in the step of his players.

“There has been improved attendance at training, and everyone is there buzzing, even the reserve grades,” he said.

“Playing at home helps the club in general, from the top down. It is a good coup for the club to have the home game, and great for our supporters.

“It is a real fairytale, and like I have said to the guys, it’s an opportunity for them to play teams outside of Canberra and an opportunity to show just how good we are.”

Macor doesn’t want his team to lose sight of the task at hand and challenged them to continue their good form in the league and win the title.

“Our main goal at the moment is to keep going in the NPL because I still want to win the championship, so we will stay focused on that for the time being,” Macor said.

Canberra Olympic and Tuggeranong United have had successful runs in the FFA Cup in previous seasons and Macor said he will be calling his rival coaches to get their insight into the uncharted territory.

The round of 32 fixtures will be played on midweek nights between 24 July and 8 August, with four matches to be played per night.

Sandra Stevenson - 18 minutes ago
Sylvana Whyte Good idea! View
Jennifer Blood - 3 hours ago
Very interesting explanation of how the buildings were constructed and leased, leading to the lack of uniform upkeep we see t... View
Iaian Ross - 4 hours ago
"To have time out, she would walk to Manuka Pool for a swim and walk back in time to be ready to cook the first breakfasts of... View
Lifestyle 8

Sarah Jane - 39 minutes ago
Shannon a day trip? View
Maya123 - 4 hours ago
Some gorgeous things there, but there are only so many cushions, vases, etc, you can have, before it becomes clutter. View
Rowan Bergin - 5 hours ago
I went back there last Wednesday and bought a ring for my daughter s birthday View
News 24

Will Canberra’s hope for an A-League team play out at GIO Stadium this year?