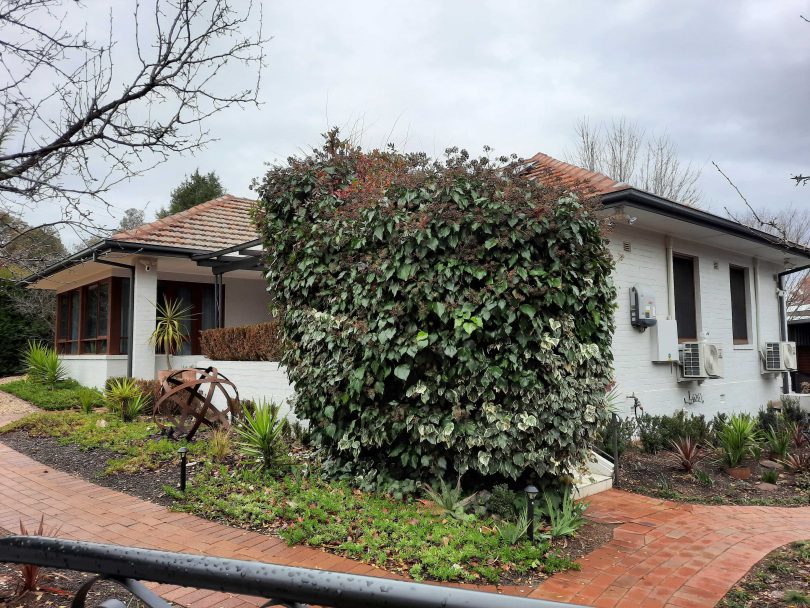 Canberra home values surged 2.3 per cent in June to take the gain for the financial year to a massive 18 per cent as supply dwindles in the face of insatiable demand.

The latest CoreLogic data shows growth is being driven mainly by the demand for stand-alone houses, with values soaring by 20.7 per cent over the past year.

In a rush to the end of June, buyers delivered a 2.7 per cent spike in house values alone. For the quarter, house values rose 7 per cent, and 14.4 per cent in the first six months of 2021.

Over the financial year, the growth in Canberra house values was second only to Darwin, which recorded a 21.4 per cent increase.

Last weekend a four-bedroom home at 1 Austin Street, Griffith led the auction results, bringing $2.3 million. The median result was just under the million mark at $931,000 and the clearance rate was 90 per cent. All of the top 10 results were above $1.3 million.

Units and townhouse values also continue to increase, but far behind the rate at which houses are appreciating. They grew a further 0.9 per cent in June for a healthy 8.7 per cent for the past year.

So far in 2020 they have appreciated 5.1 per cent, no doubt fed by some buyers being priced out of the house market and looking to at least get a toehold in an apartment or townhouse they can afford.

Cheap money continues to underpin the market generally, but added to that in Canberra are its stable public sector workforce, COVID-free status and strong local economy.

Canberra was the only capital city to experience a further increase in the monthly growth rate, up from a 1.7 per cent gain in May.

Also, fewer properties, especially sought-after houses, are going on the market. SQM Research says listings are down 26 per cent on the same time last year, second only to Hobart, and 11 per cent fewer in June than May. 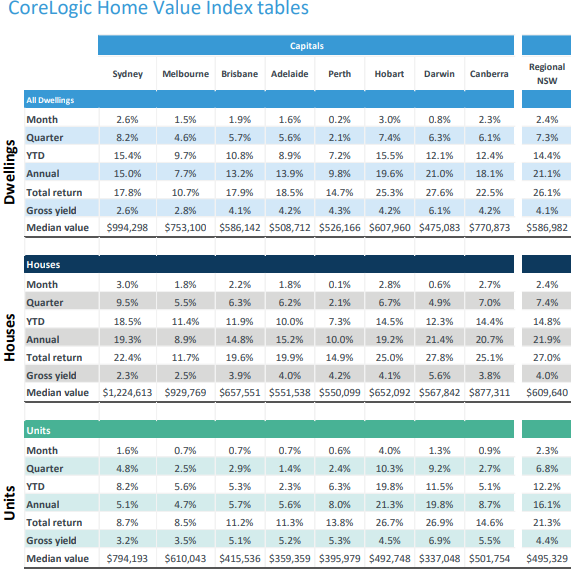 The annual growth in Canberra house values was second only to Darwin. Image: CoreLogic.

In June 2020, in the midst of the pandemic, Canberra had nearly 4,000 properties listed for sale. A year later, there were just 2,897, a sign that older listings were being cleared, even accounting for the seasonal winter slowdown.

Nationally, home values rose 1.9 per cent in June, for annual growth of 13.5 per cent, the highest annual rate of growth across the Australian residential property market since April 2004.

The seemingly runaway values are again ringing alarm bells about more people being locked out of the market and the consequences a rise in interest rates could have for buyers who may have over-committed themselves.

The ACT Government’s latest tax reforms, in which stamp duty has been abolished for off-the-plan properties up to $500,000, aims to encourage the construction of more affordable homes, and Chief Minister Andrew Barr is calling on the industry to build more of these.

Industry has responded with the long-held view that the government needs to release more land, arguing that it is very difficult to build homes, other than, say, one-bedroom apartments, that can go to market for less than $500,000.

The housing data also comes in the same week as a new report from the Australian Institute of Health and Welfare about the shrinking proportion of social housing, with the ACT having the smallest in the nation.

CoreLogic’s Eliza Owen says there are signs that some of the steam is coming out of the market and that the persistently high growth rates are unsustainable, from both an affordability perspective and renewed headwinds amid a lockdown in Sydney and other parts of the country.

There is also the potential for tighter lending conditions and rising mortgage rates.

“Already through June, several of the major banks have forecast cash rate increases earlier than has previously been indicated by the RBA,” he said.

“A sooner-than-expected uplift in the cash rate would bring forward mortgage rate rises and reduce demand for credit.

“Furthermore, off the back of APRA writing to major lenders to ensure proactive risk management in home lending, there have been early signs of more conservative home loan assessments.”

“A system that raises housing costs for all Australians, that raises instability and lowers productivity does not serve the nation well. And as for rising housing wealth, it is not like the wealth created from effort and innovation, for that creates gains for all. Rather, it makes some Australians, the affluent and older, better off by making younger and poorer Australians, and also future buyers, worse off.”

Anyone who cheers rising house prices is either a greedy sociopath, or an ignoramus.

Best news ever for my retirement

basically say goodbye to ever owning a family home.

Jack Dean retrofit is much cheaper, with increased EER and long-term savings on energy bills. There is also the environmental saving on sourcing materials.
We saved about 45% instead of a knockdown-rebuild

Fabio Fabbo we won’t be knock down rebuilding we’ll just buy a new block and put a house on it haha. Don’t wanna spend 800k on a house only to have to renovate it

Yes, I understand. We did the retrofit out of necessity… Later our architect won 2 awards for economic retrofit small home and the other a Greensmart award… Now, enjoying the EER comfort and reduced energy bills. Still a mid-70s house on the outside. The retrofit build was $279k to reconfigure the plan, improved insulation etc

but am scared of 🐍

do you accept monopoly money?

Ganesh Suppiah that is really funny!
You might get a monopoly hotel/ house

I got into the property market literally at the last possible moment for me before it was out of my reach. Every time I see news like this, I honestly just get sad because I know how excited I was and I know how devastating it must be to watch this happen as you’re searching for your first home.

Daniel Duncan inflation was at 1.1%. But okay.

Daniel Duncan haha that makes no sense at all.

Awesome keep it going up

Benjamin Challen for sure.😊

And the have nots become greater. Sigh, lucky I have great landlords

Very depressing for us potential buyers 😒