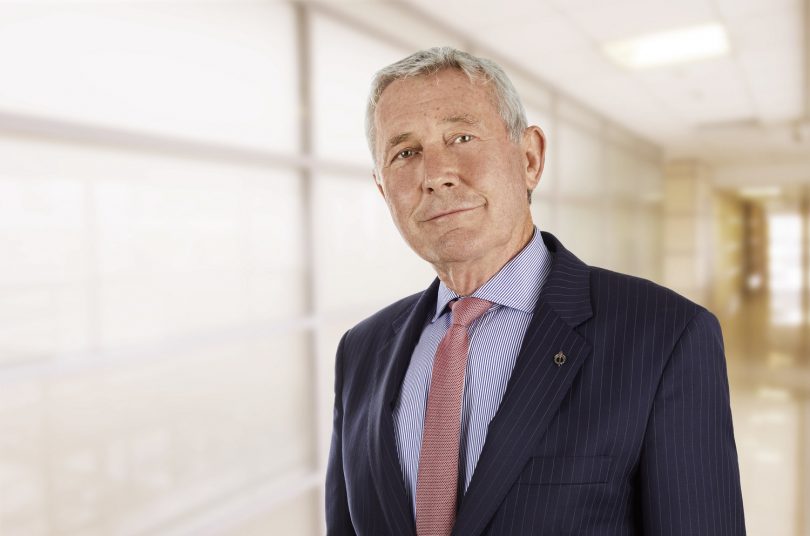 Bernard Collaery has been awaiting trial over events alleged to have taken place between December 2012 and March 2014. Photo: Collaery + Partners.

Mr Collaery was the lawyer for Witness K, who blew the whistle in 2012 over Australian intelligence services bugging the Timor-Leste cabinet room during 2004 discussions over the Timor gas treaty. In 2013, the Australian Security Intelligence Organisation raided Witness K and Mr Collaery’s chambers, seizing the client brief.

The barrister has been awaiting trial over events alleged to have taken place between December 2012 and March 2014. He is facing four charges of breaching and one charge of conspiracy to breach the Intelligence Services Act.

On 27 January, ACT Supreme Court Justice John Burns granted Mr Collaery’s request to move a date to hear an appeal over the case from 15 February, outlining his reasons in a recently released judgement.

The judgement states in December that highly respected barrister Bret Walker SC offered to assist Mr Collaery pro bono with his appeal, but was unable to appear for the appeal date in February.

Mr Collaery sought to move the hearing to a new date which was opposed by the Commonwealth Director of Public Prosecutions and the matter was scheduled to appear before the Court of Appeal Registrar in January.

But after a request was made on 23 December to allow Mr Walker access to the information on the case, required due to confidential material in the matter, the government did not respond for almost a month until a 22 January email when Australian Government Solicitors (AGS) said they were “considering” the request.

“A guiding principle in these considerations is ensuring that access to the highly sensitive national security information disclosed in this proceeding is restricted to active and necessary participants in the proceeding,” the AGS said in the email.

The solicitors proposed waiting to hear about whether or not the appeal would be moved to a new date before granting Mr Walker access, but did approve the barrister on 25 January – although this was only three weeks before the appeal had been scheduled to take place and one working day before the appeal to move the date came before Justice Burns.

Justice Burns was critical of this month-long delay, saying it meant any benefit in briefing Mr Walker over the appeal “was likely to be significantly reduced if not lost entirely” and was “unfair” to Mr Collaery.

“Because of the extraordinary nature of this power, it becomes the Attorney-General to exercise it with the greatest efficiency that the particular case permits, and strictly for the purposes for which the power was given.

“The power to refuse to include a lawyer nominated by an accused person should not be exercised in order to gain a forensic advantage.

“Nor is it any part of the role of the Attorney-General to base his or her decision on whether he or she thinks that it is necessary for the accused to instruct that particular lawyer.”

The matter of Collaery v the Queen is scheduled to appear before the Supreme Court later in February.

Peter Miller - 2 minutes ago
Peter Rudd agree agree agree. The govt needs to review street tree policy urgently.... gums are not a good choice. View
Zoe Lewer - 10 hours ago
Bob Foster yep. Us humans sure have made an impact. We are the problem. You are right. The day the people who were invaded ch... View
Joy Gosden - 10 hours ago
Yes. What were they thinking planting them in our suburbs. They drop limbs attract pests and stop grass growing around them.... View
Opinion 73

Greg Myat - 7 minutes ago
Still it would be a shame to cut everything down due to a once in how many years event. View
Mitch Bourke - 37 minutes ago
I was hit by a branch checking the mail on Monday 3 stitches later and an hour on hold to access Canberra for a tree that was... View
Peter Campbell - 2 hours ago
In N. America a study of tree failures found that Euks in general were not any more likely to fail that non-Euks when the dat... View
News 319

@the_riotact @The_RiotACT
For Ray McJannett, it's all about capturing memories - whether it's the Tomb of the Unknown Soldier at the @AWMemorial, or the hard life lines in the face of an old shearer https://t.co/kL9LmKKCao (49 minutes ago)