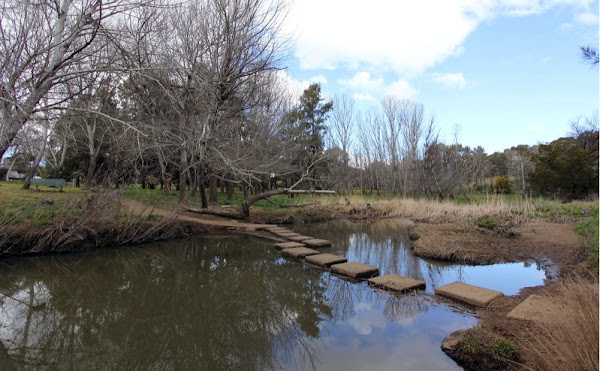 Back in November RiotACT readers were overwhelmingly in favour of keeping the Umbagong Stones which cross Ginninderra Creek.

Today Labor MLA Yvette Berry has announced they will be retained:

“I lived in Latham for 10 years and I know how close to residents’ hearts the stepping stones are”.

“I regularly take my kids and our dog out to Umbagong Park and I always see people of all ages go out of their way to cross Ginninderra Creek via the stepping stones” Ms Berry said.

“The consultation process collected more than 160 submissions from residents and users of the park, and I was pleased to see that about 80% of submissions asked for the stepping stones to remain in place”.

“This reflects the conversations I have had with members of the community who have made it very clear that they would have been disappointed if the stepping stones were removed” Ms Berry said.

Addressing the concerns about access for people with a disability and people with prams, the report found that there are pre-existing safe alternative crossing points which are now signposted that meet the requirements of the 1992 Disability Discrimination Act.

I’m surprised the council hasn’t fitted handrails, guards, and insisted on a lifeguard being present when they are used.

I’m surprised the council hasn’t fitted handrails, guards, and insisted on a lifeguard being present when they are used.

I spent my childhood falling off these stones.

They look a little sad now that there are no trees about.

A win for common sense.

Yay! A win for those who appreciate the road less travelled and a little more interesting.

Capital Retro - 14 hours ago
Double handling makes no commercial sense but the ACT government is worried about that. It is more likely that the waste we a... View
Maya123 - 15 hours ago
I have been in Canberra since way before 2008; 1974 in my case, and I always heard Fyshwick referred to as light industrial b... View
chewy14 - 18 hours ago
JC, Except you'll have South Tralee right next to Hume shortly as well and although we've got a border, you can bet those res... View
Business 19

In a recent RiotACT column on banksias, I mentioned black-cockatoos in passing – and nearly all the subsequent comments focussed...
News 23

@The_RiotACT @The_RiotACT
The owner of two distinctive office buildings in City West plans a $4.7 million revitalisation for the precinct, with the centrepiece being a new pedestrian plaza connecting them https://t.co/wJkzDPrrJl (40 minutes ago)