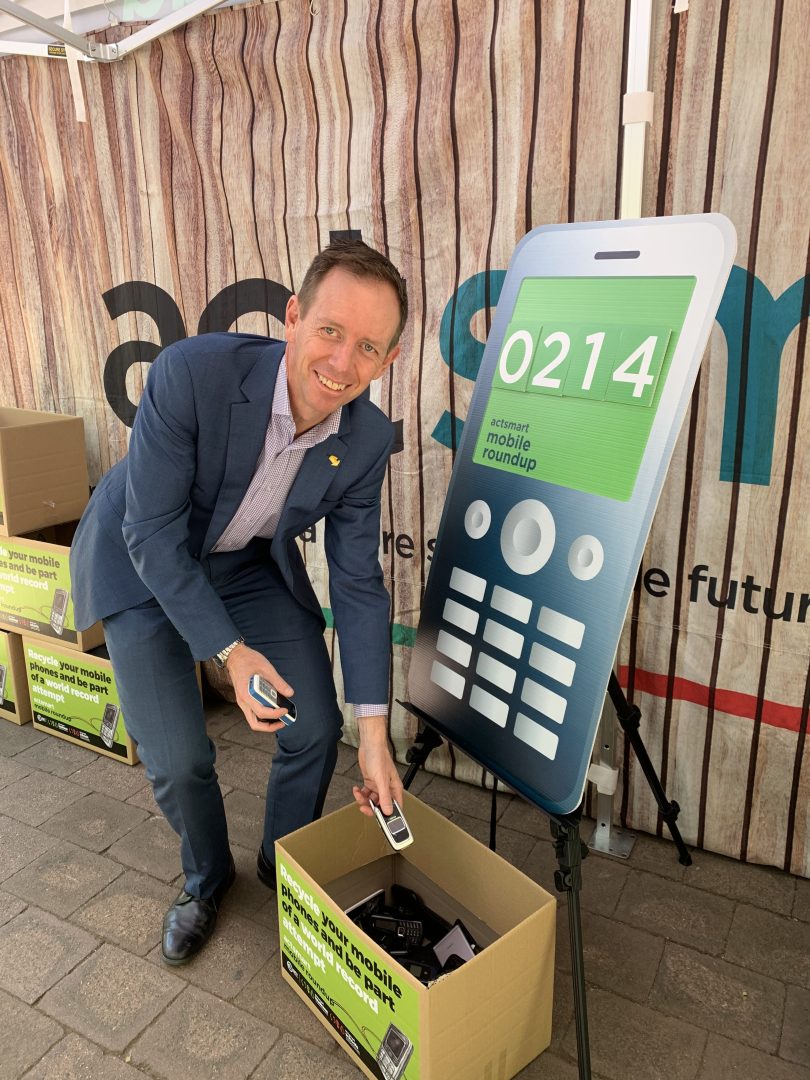 Canberra now holds the (very unofficial) world record for most phones collected for recycling in one day, with the initiative collecting 747 old phones, as well as numerous chargers and accessories, putting the capital on top of the rankings by default.

But with thousands more phones lurking in the back of drawers or collecting dust, the ACT Government is encouraging Canberrans to donate all their used mobile phones and technology for recycling.

Minister for Climate Change and Sustainability Shane Rattenbury says that although no world record is currently set for mobile phone recycling, thereby giving Canberra the title by default, he hopes Thursday’s effort will inspire other cities around Australia and the world to compete and send fewer phones in landfill.

“It may come as a surprise to most, but mobile phone parts can often be recycled,” Mr Rattenbury said.

“Mobile phones contain many different materials including glass, aluminium, gold, silver and copper that can be extracted and reused in products such as jewellery and new batteries.” 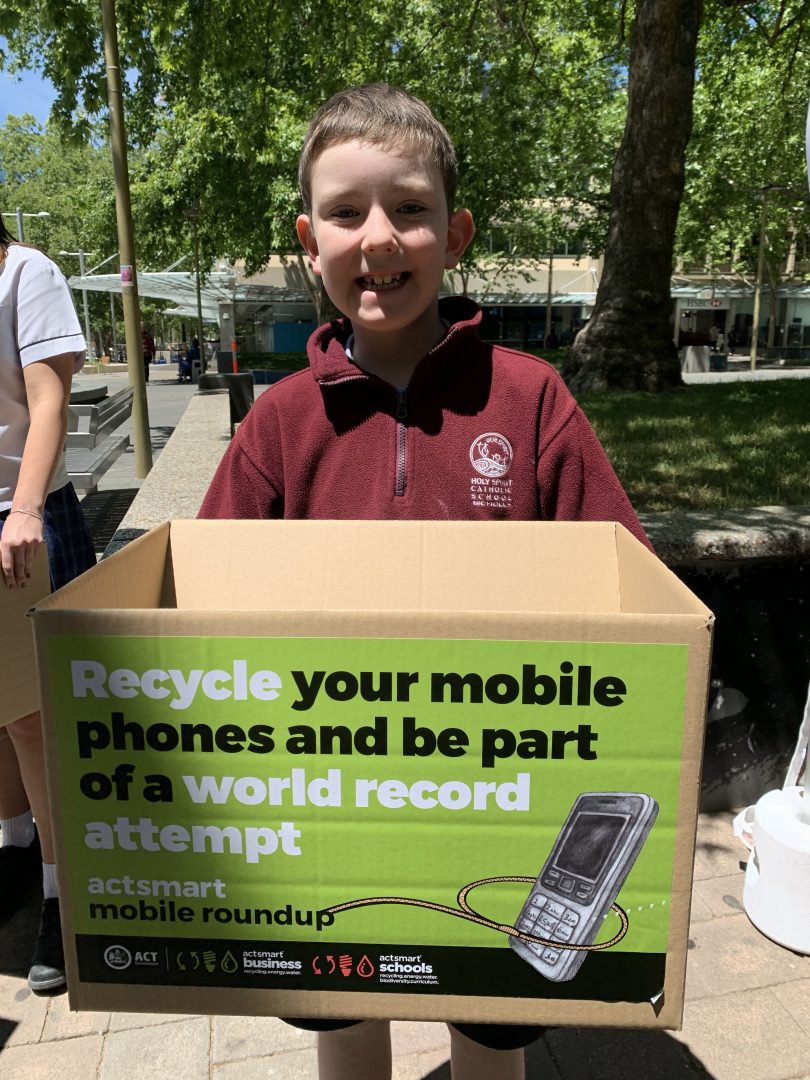 A helpful child assists in the collection of old mobile phones to be recycled.

“If you have old mobile phones or chargers at home collecting dust or clogging up your cupboards, be sure to drop these into the Actsmart team,” urged Mr Rattenbury.

Canberra schools were also praised for their involvement in the Actsmart program which teaches them more about environmental sustainability.

And if you’re worried about privacy, Mr Rattenbury suggests a factory reset.

“I would say to people if you are worried about privacy, strip the data out, take the sim card out, restore the factory settings – the type of things that we’ve all had to do at various times.

“It’s easy to do,” he said. “And if you don’t know how to do it, ask the young person in your household to do it for you.”

If you missed this week’s recycling drive, have no fear. Mobile phones can be dropped off for recycling across the capital every day. Visit Recycling Near You or Actsmart to learn more.

The fact is that waste import policies of China and other countries has made it harder to find a home for our recyclables. The shutdown of recycling facilities, especially in Victoria, has led to a small number of councils having to send some recyclables to landfill until new markets are found.

chewy14 - 34 minutes ago
JS9, I disagree because preferences and wants are not met with housing almost always. I'd prefer to live in a mansion but I c... View
JS9 - 1 hour ago
I don't think its a reasonable assumption to think that a perfectly competitive market exists Chewy in the Canberra housing m... View
chewy14 - 4 hours ago
I really don't get how you say it's only about profit as if it's a bad thing. These units only get sold and profit made if th... View
News 27

Andrea Kerr - 3 hours ago
Kim KD Winks the developer has paid $400,000 in settlement to the government after many months of negotiations that’s a lit... View
Motoring 3

JS9 - 12 hours ago
They haven't been installed yet I don't think Graham given it was only just funded in the Budget released a couple of weeks a... View
Graham Byrne - 12 hours ago
I was wondering what all those cameras were about. They are everywhere. But I’d rather see more red light cameras. View
News 7

Mike of Canberra - 13 hours ago
Over many years, the only consistency I've seen from the green-left is their apparent dislike of ordinary working people actu... View
News 6

steve2020 - 15 hours ago
The disrespect towards women had been encountered in many workplaces that I had worked in, in Canberra. The irony is that bec... View
jybrik - 22 hours ago
What a thoughtless, demeaning comment. "So, get over it" is a sentiment that we as a society should be fighting against, as i... View
Business 1

Nick Swain - 15 hours ago
Even in the hardest lock down time Green Square was the place to hang out - there was a strong sense of community. Many of us... View
Community 25

@The_RiotACT @The_RiotACT
The Canberra Day appeal asks us all to give where we live next week, to locals in real need. Among them are the clients at Meridian: here's why a vulnerable group needs your help https://t.co/uh9pWNYqE9 (39 minutes ago)

@The_RiotACT @The_RiotACT
Canberra has been discovered. Let's hope we can relish the opportunities and overcome the challenges that brings, says Ian Bushnell https://t.co/0Nbtm98Tn1 (4 hours ago)