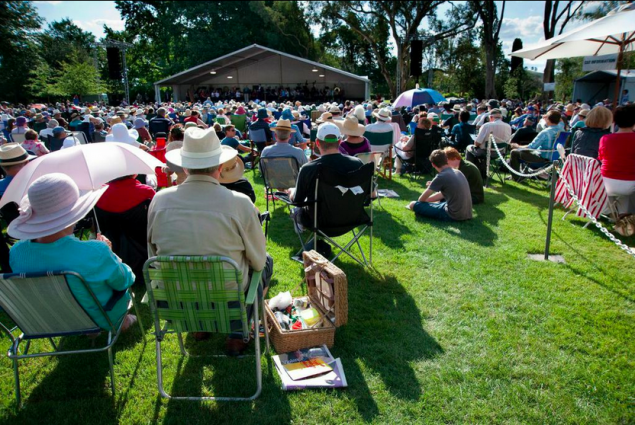 This Valentine’s Day thousands of Canberrans will take their picnic baskets and their loved ones to the lawns of Government House as the Canberra Symphony Orchestra invokes the intoxicating music of the British Isles in the 33rd Shell Prom Concert.

Held in conjunction with the National Multicultural Festival, the concert program, themed A Touch of Tartan, includes favourites such as Scottish Fantasy, the Hebrides Overture, orchestral renditions of Danny Boy, and more.

Conductor Guy Noble says he enjoys working with the CSO as the orchestra has a sense of fun about it, and particularly enjoys the Shell Prom.

“The CSO doesn’t perform every week of the year, so I think they come together with a special sense of enjoyment to play a concert,” He said “and the Prom is lovely! Beautiful gardens, the hint of a breeze, a bottle of wine, a picnic rug and some salmon canapés, the sound of an orchestra wafting across the grass – yes, I’m looking forward to this”.

“It is also wonderful to be performing with Anna again. I have worked with Anna before and she is amazing. In fact I championed her for a concert at the Sydney Opera House with the Sydney Symphony. She played with such maturity and technical confidence I was amazed.” said Mr Noble.

This is the second time that 18 year old Anna Da Silva Chen has performed with the CSO, having performed at the 2014 Shell Prom, and since then Anna has gone on to win international awards and perform with major Australian orchestras.

“Over the past year I’ve been giving recitals in New South Wales and Queensland and took part in the ABC Young Performers Awards, reaching the grand final which granted me the opportunity to perform Tchaikovsky’s Violin Concerto with the Adelaide Symphony Orchestra, followed by a trip to New Zealand for the Gisborne International Music Competition, where I received the Prof. Jack Richards String Player Award.” Said Ms Da Silva Chen.

“I’m thrilled to be a part of this enchanting program and will be playing one of Bruch’s signature works, a fantasy full of lively Scottish folk themes. I’ve had several experiences performing in Prom concerts and adore how they are characterised simply by the appreciation of great music and endless fun for the performers and audiences.”

The Shell Prom is held on the grounds of Government House, Yarralumla, on Saturday 14 February. Concert starts at 5pm, gates open at 3.45pm. Tickets available at the gate or by visiting cso.org.au.

Picnic Hampers are also available for order through http://www.trybooking.com/Booking/BookingEventSummary.aspx?eid=119443

Daniel Duncan - 10 hours ago
Another reason to vote Barr and his crony's out. View
Rainer Busacker - 10 hours ago
Steve Wood "Gunna-Do-Barr" sprooks a lot of things, especially now just before an election. When and if ever will he actually... View
ACT Election 11

Acton - 10 hours ago
You do not dispute the fact that Barr = high rates, but appear to have some conceptual difficulty with 'nothing else matters'... View
russianafroman - 11 hours ago
Maya123, All Labor has done for us is build chic apartments for the rich. The Liberals are looking out for the blue collar bl... View
JC - 12 hours ago
People should also be asking what Coe equals. Because it isn’t overly clear. We know they stand for everything that “anno... View
ACT Election 1