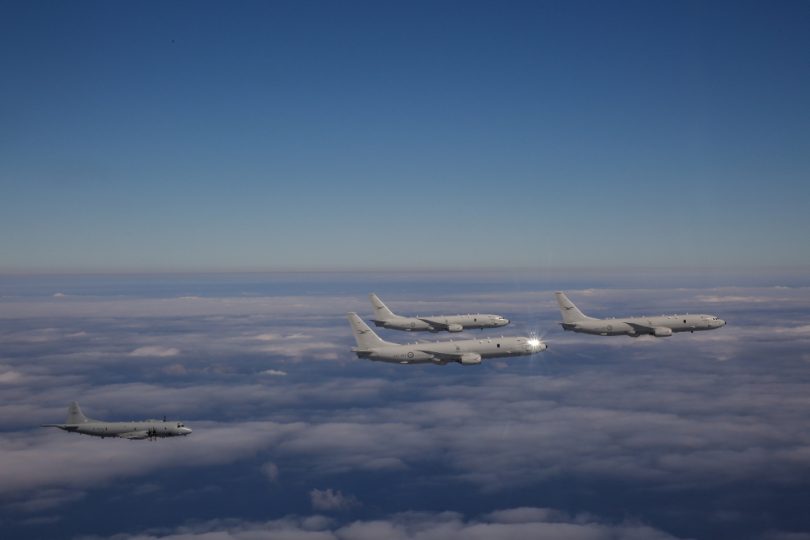 Three P-8A Poseidon aircraft flying in formation with an AP-3C Orion in preparation for the Air Force centenary flypast in Canberra on 31 March. Photo: FLTLT Andrew Gill, Department of Defence.

More than 60 historic and current aircraft will mark the centenary of the Royal Australian Air Force this Wednesday (31 March) with a wave of flypasts over Lake Burley Griffin from 11:25 am.

The public is encouraged to find a vantage point on Lake Burley Griffin.

Also keep a close eye on RiotACT for a full wrap-up of the event, with photos of the flypast.

A map of the flight path of aircraft over Canberra for the Air Force’s centenary. Image: Supplied.

The flypast will commemorate the more than 350,000 men and women who have served with the Air Force and the 11,191 RAAF members who died in service.

She served in Timor, the Middle East and several operations closer to home, mostly with 1 and 6 Squadron at Amberley, uploading and processing aerial film for F-111s. Both Michelle’s parents also served with the Air Force.

“I owe it to my brother who told me that I could get paid for taking photos if I join the Air Force,” she says. “My photography training was at RAAF Base East Sale and was nine months long but was recognised as a three-year degree.

“It was absolutely the best training I could have received. This instilled in me a habit to always produce the absolute best I could, something I share with many Defence veterans.”

A flag-raising ceremony featuring ADFA’s Air Force first, second and third-year training officers will be held at 7:00 am at Commonwealth Place near the international flags on Wednesday.

At 8:00 am, the Warrant Officer of the Air Force will raise the RAAF Ensign at Regatta Point at Blamey Square at Russell Offices. There will be six flags raised by six airmen/airwomen, representing the enlisted ranks of the Air Force.

These events are open to the public to attend from a distance at the perimeter of each location.

That will be followed by a private Queen’s Colour presentation parade at Government House at Yarralumla, featuring the Governor-General, representing the Queen. The last time this occurred was 1986.

The Air Force Band will also play a prominent role in marking the centenary, with performances at all of the events.

To begin proceedings, Aboriginal and Torres Strait Islander communities from around Australia, in partnership with Air Force personnel, collected pieces of country, with the soil, sand and shells deposited in the Australian War Memorial’s For Our Country sculptural pavilion on Monday (March 29) to mark the start of centenary celebrations.

“The recognition of the First Nations people and to the spirit of country means a lot to traditional custodians because of the strong connection to the land,” he said.

“The smoking ceremony and the gift of soil from country is a very meaningful way forward to embrace Aboriginal and Torres Strait Islander culture and traditions.” 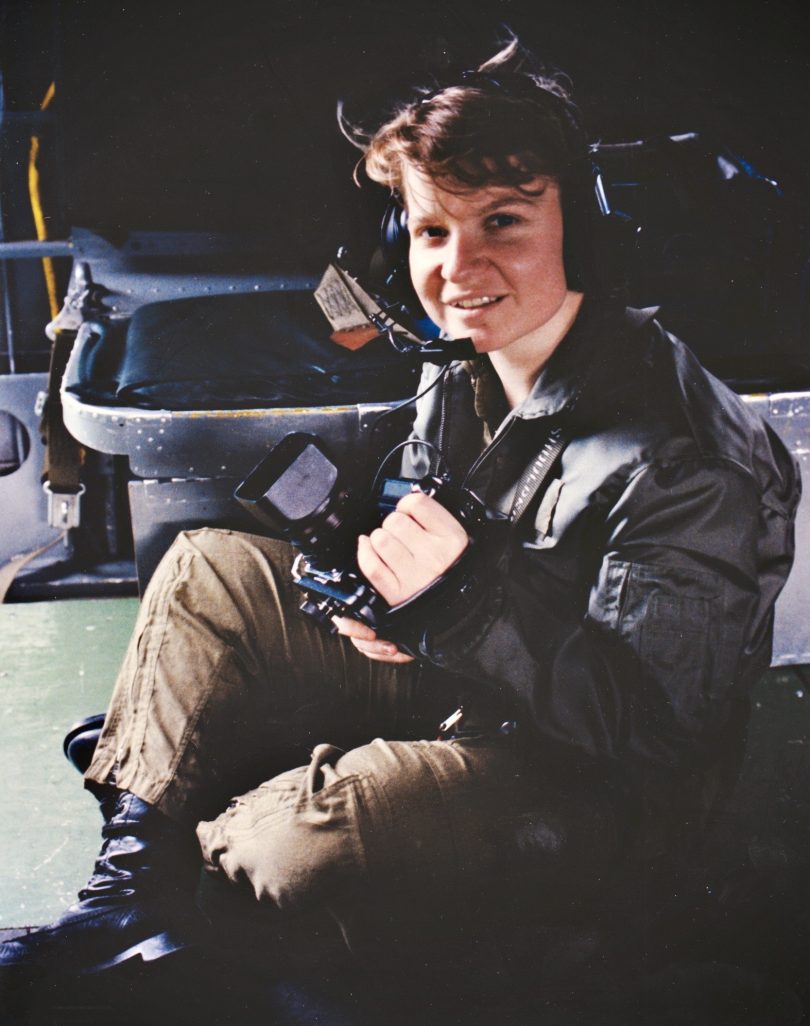 Michelle Kroll will be among those watching.

“On reflection of the RAAF’s 100 -year anniversary, I wear my medals proudly, and I reflect on the friendships I have made. The photographer in me is excited to see the 60 ship flyover on Wednesday!”

It’s was a good fly pass but would have been better if the planes flew lower and much faster. Maybe with afterburners in, and speakers all around the lake playing Kenny logins Danger Zone on loop. A straifing of the Carillian would have been nice, and a few low passes of those lucky buggers standing on top of the National Library roof would have delighted young and old.

Congrayts to the RAAF and the organisers.

In a world where many motorists have trouble staying in their lane, the skill, precision and courage of the Roulettes – flying only 3 metres apart at times(!!) – is truly amazing.

So excellent to celebrate 100 years of RAAF on a glorious Autumn day in Canberra!

Gotta say whoever organised this event has succeeded in making it one of the most boring flypasts i’ve ever seen..

Aldo you must have been watching another display……where we’re you ?

It appears that you’re easily pleased😝

Maybe in another hundred years the ADF/RAAF will start looking after their veterans. Gotta love the misdirection from the commission into veteran suicides. Is the “60 ship flyover” meant to represent each veteran that committed suicide last year while fighting their government for basic medical care?

We can spend billions on war memorials and flyovers but the Department of Veterans Affairs still employ top flight lawyers to deny basic medical access for injuries during service.

Ben Brown – think Trav is coming across for this ✈️

Jeff Tanner this will be so cool !! Are you going to be able to see it ?

Shame it couldn’t have been delayed a couple of days, schoolies would have loved
to see it. Just sayin…..🤔

Maureen Ryan that will scare the s… out of them, and boring……… 🤐

Carole Peel I’m sure 48 hours delay wouldn’t have hurt, not to mention the disruption today for workers….. makes sense !!!!

Carole Peel was surprised that schools didn’t have an excursion to it, would have been wonderful for the kids to see and I’m sure they would never forget it.

Glenn Brewer you watch from lock down

Just had a hudson, 2 spitfires and a mustang fly over preparing for tomorrow:)

Jill Evans Darryl can watch this live on facebook!!

Michael Toussis get the tissues ready!

Yay. Government working to solve a problem caused by government. And people will praise them for it. View 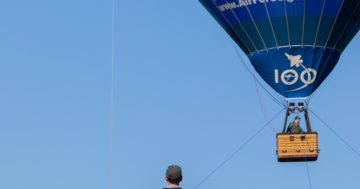 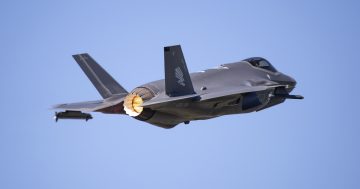