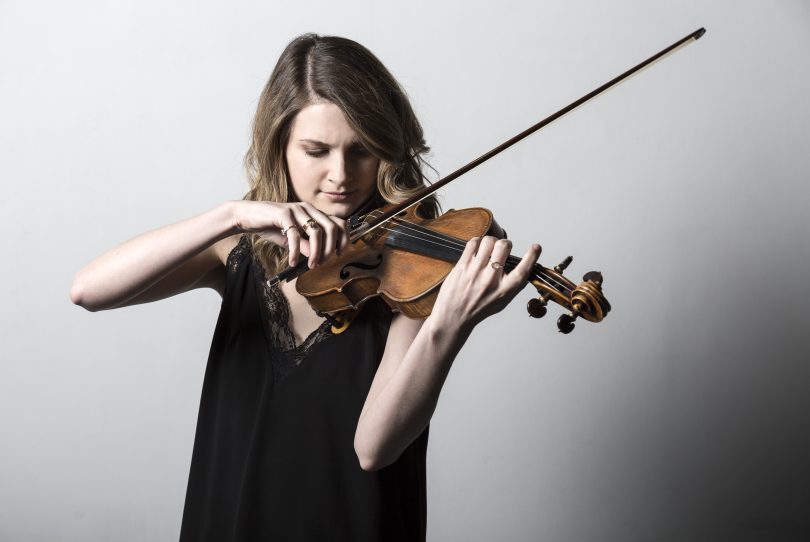 Courtenay Cleary says there will be a lot of violin acrobatics – “It should be quite entertaining.” Photo: Pia Johnson.

Canberra audiences will be treated to performances from a young Australian violinist who has already made her mark on the world stage, playing for royalty not once but twice.

Brisbane-based Courtenay Cleary will perform as the feature soloist with the Canberra Symphony Orchestra (CSO) on Wednesday and Thursday in the first Llewellyn Hall concert of the year, appropriately titled Redemption after the COVID-19 disruptions of the past couple of years.

Ironically, the virus will prevent London-based chief conductor and artistic director Jessica Cottis from coming to Australia to steer the orchestra. Award-winning conductor and musician Fabian Russell has stepped into the breach.

It’s a disappointment for Cleary who has worked with Cottis in the UK but she knows Russell well through the Australian Youth Orchestra and the Melbourne Symphony Orchestra.

Cleary first played as a soloist for the Queen at Westminster Abbey for the Royal Commonwealth Service in 2017, a performance broadcasted live on BBC television.

“That was probably the scariest part,” she says. “But once I started playing, I thought well I’ve started, let’s just finish.

“It went really well. I got to meet her afterwards and she’s just lovely. She seemed to have really enjoyed the performance.”

She must have because Cleary was back in front of Her Majesty at Buckingham Palace for the Opening Ceremony of the Commonwealth Heads of Government Meeting the following year.

The pandemic stopped Cleary’s flourishing career and studies in mid-flight and she chose to return to Australia from the US where she was living.

She was supposed to perform the Korngold Concerto with the CSO last year but COVID stepped in again.

This time she will be tackling a challenging concerto by Australian composer Margaret Sutherland (1897-1984), who was considered ahead of her time.

Cleary says it’s a mix of the romantic and contemporary that poses some devilish questions for the player.

“Sutherland really pushes textural boundaries, it’s almost experimental, but then she puts that beside really lush and romantic harmonies,” she explains.

“So you get the best of both with that hint of contemporary writing – which particularly for her era seems quite adventurous – then you get the beautiful lush melodies you’d expect from Brahms and Tchaikovsky.

“It’s quite fiendish as well, with a lot of violin acrobatics. It should be entertaining. There are a lot of different styles and textures within the whole piece, something for everybody.”

Cleary says the composer isn’t afraid to get the violinist to explore harmonies unconventionally, with many tricky double stops or playing two notes simultaneously.

“They don’t particularly suit the instrument well but she’s specific with the harmonies she wants and that’s how she achieves that,” she says.

“That’s a bit of a challenge for me but I’m enjoying working it out and figuring out how I can get around that technically but also present it in a way that makes sense and is musical and beautiful.”

Cleary is glad to be back travelling and playing but has also enjoyed the space at home, with family and fiance, that the pandemic has given her.

The Redemption program will open with Wagner’s iconic ‘Tristan chord’ from the music-drama Tristan und Isolde.

Wagner’s influence can be heard in the soundtrack for Vertigo, Hitchcock’s masterful psycho-thriller and the program includes a suite from Bernard Herrmann’s score, following the CSO’s sold-out film special in 2021.

To learn more and for tickets visit the CSO website.