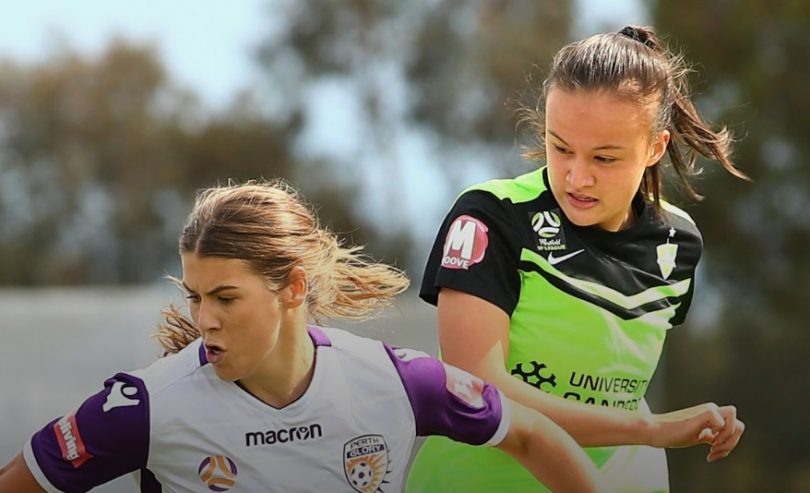 Canberra United’s Amy Sayer has been selected in the Matildas squad to face Japan, Brazil and United States. Photo: Supplied.

“You are in the Matildas!”

That is the message Canberra United’s teenage star Amy Sayer has been dreaming about since she started playing football as a five-year-old.

Her dream is now a reality after an impressive debut season saw the 16-year-old selected in the Matildas squad to face football powerhouses Brazil, USA and Japan and defend its upcoming 2018 Tournament of Nations crown in the US.

“I received an official notice via email that I was in the squad for the Tournament of Nations but my mum saw the email first and texted me, saying ‘You are in the Matildas’,” Sayer said.

“I was very shocked but mostly excited to finally have a chance to be part of the team. I had to re-read the email so many times to realise that it really was happening and my dream of making my debut for the Matildas was going to come true.”

A dream come true and an amazing honour to be selected in the Matildas squad for the upcoming tournament ???? #ToN2018 #GoMatildas

Since she was five-years-old, Sayer has wanted to be a footballer, even though her mother wanted her to be a ballerina. Sayer followed in her brother’s footsteps and started playing the round ball game for her local club Northbridge, where she fell in love with the sport.

It didn’t take long for the footballing whiz-kid to grab the eye of the national youth selectors, which saw her clinching the midfielder position at the age of 14, with call-ups to the under-17 and under-20 national teams.

Canberra United offered the teenager her first professional contract last season, where she showed her incredible potential, scoring her first goal against Perth Glory in November.

The humble and grounded teen said she wasn’t feeling overwhelmed about sharing the field with some of Australia’s finest footballers such as Samatha Kerr and Lisa De Vanna, and was just focused on playing her best.

“I just want to learn as much as I can from the coaches and from the older players and to just have a good time,” Sayer said.

“My goal is to just make my debut and to play as much as I am offered and just seize the opportunities I have been given so if I ever get the chance, I can come back into the squad.

“My ultimate goal is to break into the World Cup team but I am a younger player so I just want to be respectful to all the coaches and players and to enjoy it.”

The Matildas will kick off their 2018 Tournament of Nations campaign against Brazil on 26 July.

All three of the Matildas’ matches at the 2018 Tournament of Nations will be broadcasted live and exclusive on Foxsports.

David Brown - 28 minutes ago
That is irrelevant. They are set low all across the country for exactly the same reason. $$$$$$ View
Lisa Baker - 52 minutes ago
Maybe they can raise enough $$ so our rates don’t have to rise another +15% yet another year in a year... View
Jeff Smith - 5 hours ago
Greg Oakes I'm not sure the speeds are that standardised in reality. My wife was done on Longmore Cr thoroughfare in Wanniass... View
Food & Wine 19

Shane Westmore - 7 hours ago
Ch.9 are still stuck in the 90s & so are many of their viewers... it's like they want you to order Kayo View
Anthony Chase - 7 hours ago
Its got little to do with football and everything to do with ratings. View
Marlene Valenzuela - 8 hours ago
Possibly not.... Not unusual!! View
News 9

Helen Prior - 8 hours ago
Kingston was a friendly safe place to live.Now all grog and selfies. View
Food & Wine 7

Mike Bolton - 17 hours ago
I'm guessing that Byron Bay and Nimbin will probably be among the last regional areas to access 5G. View
Business 18

James Manukich - 17 hours ago
Well Done 👌👌👌👌👌 View
Gary Hatcliffe - 20 hours ago
Wacky-doo! View
Nassim Rezakhani - 21 hours ago
Congratulations Jason!! One of the best agents around!! Thank you for the amazing auctions you’ve done for us in the past!... View
News 25

A 16-year-old boy will face court today via video link charged with the murder of the 18-year-old man in what Detective...
Breaking 2

ACT Policing is investigating an assault that occurred on Tuesday, 13 October at Belconnen Mall. According to police, at about...
News 9

UPDATED 1:45 pm Elizabeth Lee has been elected leader of the Canberra Liberals, taking over from Alistair Coe who did...
News 95

Leadfoot drivers beware - the ACT's speed detection net is about to be widened with the addition of two new...
Property 8

@The_RiotACT @The_RiotACT
The end of a relationship can bring some unexpected financial surprises. Find out what you can do to protect yourself from unwanted debt https://t.co/OumLmu6N34 (30 minutes ago)

@The_RiotACT @The_RiotACT
An ethical hackers' hackathon is seeking to locate some of Australia's long-term missing persons. Here's how they'll do it https://t.co/B9CjdGYiw6 (1 hour ago)

@The_RiotACT @The_RiotACT
Goulburn residents are counting down the days until their mammoth charity fundraiser when they'll be on the move for 24 hours in support of Cancer Council NSW https://t.co/4UI2vlqxqa (3 hours ago)