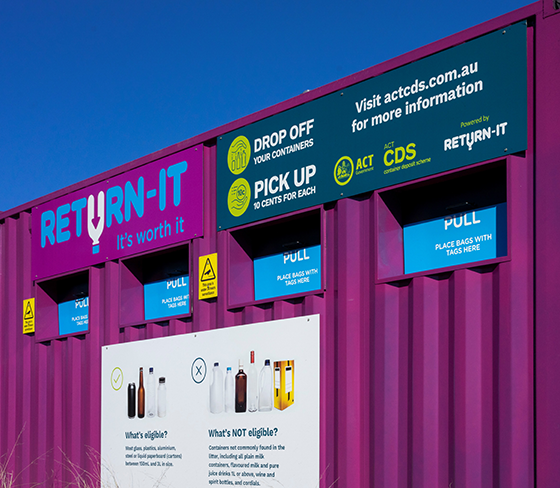 One of the drop off points for the scheme. The app means businesses and people who find it hard to get to one can have containers collected. Photo: ACT Government.

Time-poor businesses and households will be able to have their redeemable containers collected with the launch on Wednesday of a new phone app described as the Uber of recycling.

Recycling management company ReGroup’s Return-It Collect App will allow businesses and households for a fee of 4 cents a container to order a pick-up for the ACT’s Container Deposit Scheme.

City Services Minister Chris Steel said the new free app, which has been successfully trialled in Kingston and Gordon, would help people who might not have the time or the means to drop off their eligible containers at a return point.

The containers can be handed over in person or left in a safe place for the driver to collect.

He said the app would be particularly useful for businesses such as bars, hotels and restaurants which had large volumes of containers, especially bottles.

“We want to increase the number of containers deposited and we recognise that getting local business involved and making it easier for them to return large amounts of containers is the most logical way of doing this,” Mr Steel said.

“Having a collection service is a great way for business to return containers without the hassle of their staff driving potentially thousands of containers to the return points each week.”

The app operates a similar way to ride-sharing services, so users get real-time updates on when the driver will be arriving, when their containers have been collected and when they’ve been counted.

ReGroup managing director David Singh said the app allowed people to redeem the deposits on the containers without leaving their home or business.

He said it was being launched in Canberra because Canberrans are passionate recyclers and early adopters of technology, like Uber. “It’s the Uber for recycling,” he said.

The service would start with containers but hoped to also include mobile phones and textiles soon.

Mr Singh said the service would also help charities by allowing their supporters to have containers picked up and deposits remitted to a particular organisation.

He said ReGroup had divided Canberra into six segments and pick-ups would initially be weekly but that frequency would increase as the service grew.

Business take-up was high during the trials and a couple of Canberra-based hotel groups had already joined up to use the service across the city.

Return-It Collect will also allow users to track their environmental impact, in terms of energy and greenhouse gas savings as well as reducing waste to landfill.

Similar to the Express bag drop collection points across the ACT, customers need to ensure their containers are in a sturdy bag so that they can be transported back to the depot.

Over 41 million containers have been returned the ACT CDS network since it began in June 2018.

For more information, including container eligibility, on how to use and download Return-It Collect, visit www.returnitcollect.com.au.

Owly Mchoots these are the auto places

Do the NSW style of depots, no plastic bags needed. Google return and earn.

So now I’ve been told it’s 3c per bottle, and 4c per bottle. So I check their website and it says ‘a couple of cents per bottle’....helpful! 🙄

If anybody else is frustrated...I just found it in terms and conditions. It’s 3 cents per bottle....

More plastic! Bag all the plastics for recycling into plastic bags. Pathetic

Caitland we should do this

Now we are even too lazy to recycle 🤦‍♂️ Gotta save the planet but not if we have to put ourselves out.

An Uber pickup by suburb is better than 50 cars driving to the recycling place in Mitchel.

Lars Nissen Hows that? Is the Uber 50 times bigger than each car?

Michelle Lussick - 52 minutes ago
Robyn Whitney Soxy’s Hut we knew it as. View
John Moulis - 8 hours ago
A camera was affixed to the beacon on Mount Ainslie when construction of new Parliament house started in 1980. It took one ph... View
Lifestyle 20

Robyn Baer - 2 hours ago
Drove back today. LOTS of potholes due to the rain. View
Jenny Drenkhahn - 8 hours ago
not to mention changes further South in the Bega Valley Shire; rebuilding in Cobargo and Tathra, Twyford Hall in Merimbula ;... View
Lifestyle 9

Doug Jackson - 2 hours ago
Really bad plan. If you need a fence then you may not be paying appropriate attention to your child. Even with a gate somebod... View
Cary Elliot Johnson - 6 hours ago
Claire Lee Koo because its a democracy with varying opinions on an open column. View
Elizabeth Jones - 6 hours ago
I saw the petition but it wasn't clear it was supposed to be a few fenced playgrounds per region. I know being in an older pa... View
Opinion 67

Peter Marshall - 2 hours ago
Wayne Martin the long term effects of the polio vaccine aren't known. Everyone might drop dead seventy years after receiving... View
Wayne Martin - 2 hours ago
Argo Jones and how is that when it hasnt been fully trialed and the long term after efects are unknown View
TimboinOz - 2 hours ago
But they are NOT taking just 'their chances' they are behaving as if they are more important than anyone else. View
Lifestyle 2

Iaian Ross - 3 hours ago
Time Thief is more impressive at night than during the day. Seriously. View
Business 2

Peta-Rene Prior - 4 hours ago
All kids should go to boarding schools?? Perhaps get all kids attending school to start with. View
Stas Idowu - 5 hours ago
Synergy Group View
Lifestyle 8

chrisJ - 6 hours ago
It is good to hear that new public toilets are included at Kaleen and Duffy. None of the 11 centres listed for an upgrade are... View
Public Sector 6

kenbehrens - 7 hours ago
Isn't bringing forward future infrustructure builds going to create a construction vacuum down the track? The other issue of... View
shannos - 7 hours ago
Exactly, investors chasing capital gains and creating a self -sustaining ponzi growth model at the expense of our younger gen... View
shannos - 7 hours ago
Too much emphasis on infrastructure and construction which is cyclic transient employment relying on developers growth model.... View
show more show less
*Results are based on activity within last 7 days

@the_riotact @The_RiotACT
The iconic gang gang cockatoo could be in serious trouble, but citizen scientists can help save the species https://t.co/MXAtdr69HK (41 minutes ago)

@the_riotact @The_RiotACT
They may not be haute cuisine, but #local cookbooks are full of treasured family #recipes for everything from apple cake to homemade Irish liqueur. What's on your shelves? https://t.co/nHni3nSBrk (2 hours ago)

@the_riotact @The_RiotACT
Tributes have flowed for Andrew #Prowse, who began the annual Santa Speedo Shuffle with his wife Heidi to raise funds and awareness of #cystic fibrosis https://t.co/KlEd8k60GD (3 hours ago)