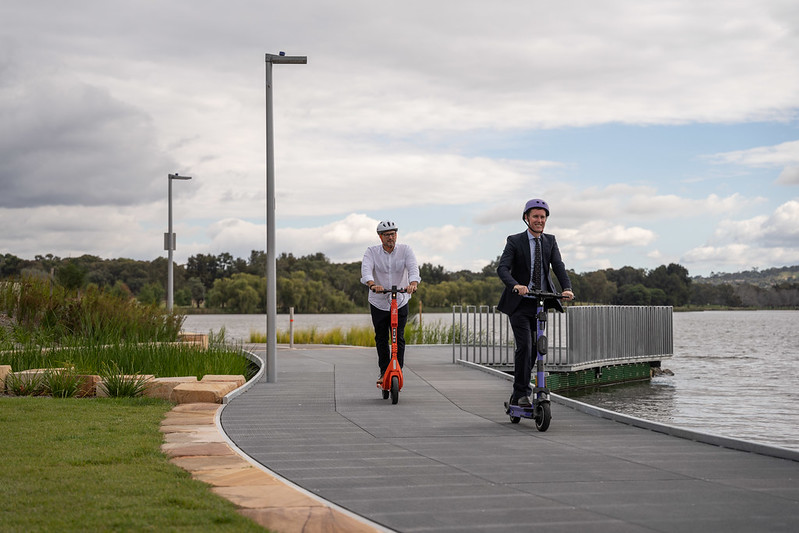 E-scooters are a-coming to more suburbs in Canberra, including Weston Creek and Tuggeranong. Photo: ACT Government.

E-scooters can now be ridden all the way from Gungahlin to Tuggeranong (if you’re really game) thanks to the latest expansion of the scheme.

More residents in Tuggeranong and Weston Creek have become the latest to be able to jump on an orange Neuron or purple Beam to get themselves home.

The ACT Government is now touting the scheme as “covering the entirety of the city”, although the residents of some outer suburbs might take umbrage with that.

Suburbs in Weston Creek and Woden have also been added, including Coombs, Wright, Holder, Waramanga, Stirling, Pearce, Torrens and Farrer.

The devices are generally blocked from being used on major arterial roads.

READ ALSO Molonglo Bridge project still awaits a contract, but the ACT Government insists it will open in 2025

Transport Minister Chris Steel said this latest expansion was an Australian first as the devices could be ridden across every district.

“Canberrans can travel north to south and east to west using a range of shared paths and connecting links,” he said.

“We have been working closely with Beam and Neuron to develop the right approach for rolling out the entire scheme by implementing slow zones, designated parking sites and no parking zones to keep the scheme functional and safe.”

Whether the scheme will expand any further south is still up for consideration.

More than 2.4 million trips have now been taken on the e-scooters since they were first trialled in Canberra in 2020.

Most of these trips are short – less than two kilometres – and that’s exactly where the government is encouraging their use to get people from home to public transport hubs, for example.

Since those first trials in 2020, concerns about injuries, safe parking and riding under the influence of alcohol or other drugs have emerged.

A raft of new laws was passed in March, introducing new offences for riding the devices without proper control and giving police the power to direct a person to get off an e-scooter.

In August, Mr Steel said he was unaware of anyone who had gone to court and been penalised for offences such as drink-scootering.

The government has previously signalled it was considering implementing no-park zones outside popular nightspots or targeted curfews to make the devices harder to access at times and in locations where riders would likely be intoxicated.

Any update on that has yet to be forthcoming. 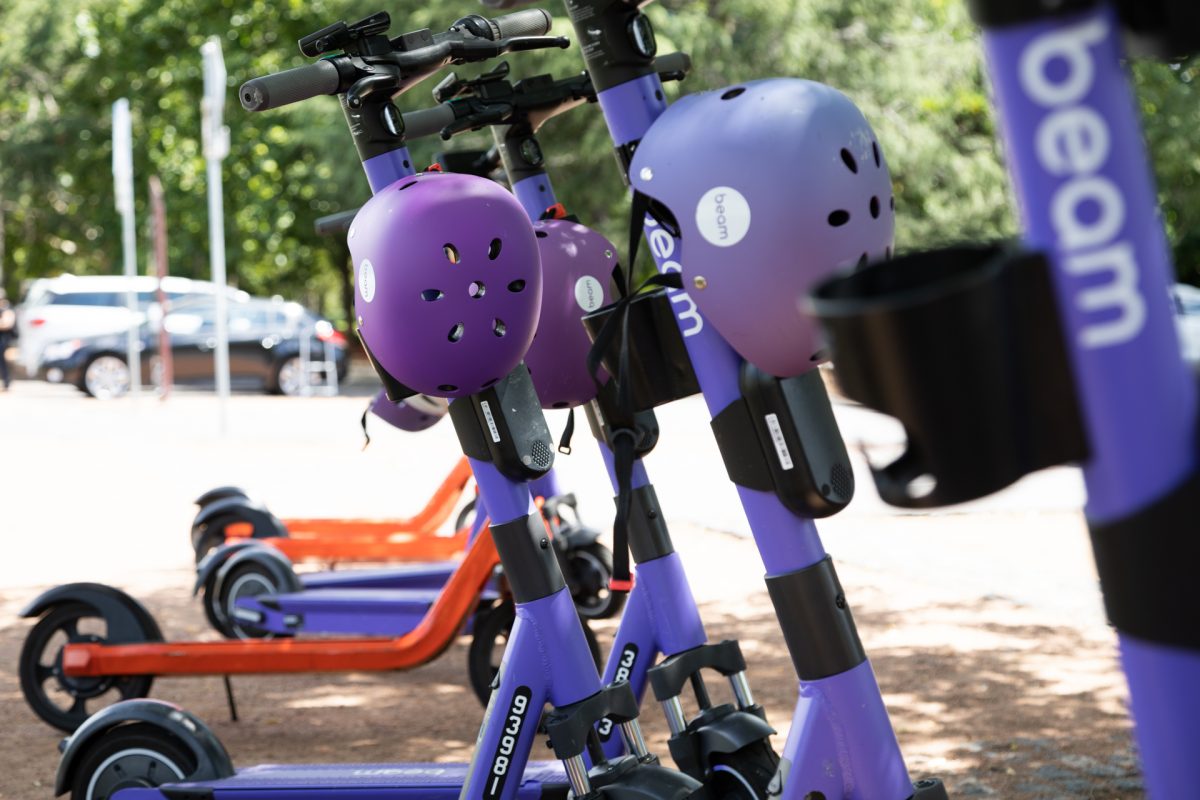 The operators of the shared e-scooter scheme say they are committed to safety. Photo: Michelle Kroll

Both e-scooter providers will continue to host come-and-try pop-ups across Canberra to make sure the community can learn how to operate an e-scooter safely.

Safety remains at the forefront of the minds of both operators.

Neuron Mobility Head of Australia New Zealand Richard Hannah said e-scooters were great for locals and tourists to travel in a safe, convenient and sustainable way.

“As we expand, safety remains our top priority. Our e-scooters are packed with cutting-edge features designed to make them as safe as possible for riders and pedestrians,” Mr Hannah said.

“We encourage riders to try our digital education platform, ScootSafe Academy, to learn how to use our e-scooters in a safe and responsible way.”

“As we expand our footprint further in Canberra, we’re committed to introducing new technology and upgrades to our e-scooters to improve safety for all Canberrans who use the roads.

“Ahead of our expansion into Tuggeranong, we have commenced a trial of tactile signage on our e-scooters to support pedestrians, especially those with blind or low vision, to report badly parked scooters.”

Come this evening, many of them were lying on the grass or on the sides of footpath like discarded liter.

They have teams who come and recharge them and put them back in central positions, so doesn’t really matter where they are left.

I’m old and have poor vision but that doesn’t prevent me from assisting in parking the dropped scooters.

That tracker guy who has to find the location beeper sure earns his money.

Just another lake to put them in

Alanna Hewlett I’ll pay to see the video of that

Julie Jefferson I have photos of Dan dinking Laura at 2am last Friday 🤣 thought we were going home via Calvary for sure!!

they are bloody dangerous when the wrong people are attempting to ‘drive’.

Just saw one going the wrong way on a one way street. She didn’t have a helmet! 😡

Bit too soon to raise this issue in Tuggeranong, there were quite a few witnesses traumatised in Tuggeranong when that poor girl was killed crossing an intersection on Drakeford drive on an e-scooter. People need a bit more education around using them and being aware of others using them.

Lake Tuggeranong’s blue green algae problem might finally be fixed when it has numerous scooters “introduced” to its waters!

For the cost to ride between Gungahlin and Tuggeranong I could probably buy one!!!

Douglas Oliver I was just going to comment the same. $25 for 2 to ride 2km each way last weekend.

You’d run out of battery and probably couldn’t find another one nearby that has enough charge.

Laura you down? Gunners to Tuggers?

I can’t look at this picture and not think of this.

Sick to death of dodging them outside shops, parked at the entrance so it makes it hard to navigate the entry

Angela M J Brown wouldn’t they be covered by the same laws that ban you from cycling on the footpath within 10 metres of an open shop?

I’m not aware of such a law in the ACT, and can’t find one. Would you cite it, please?

Matt Donnelly it was written all over the old cycleway maps years ago.

Was the wording but I would not be suprised if it’s been repealed for some stupid reason.

Plenty of examples of drink-scootering in Civic on any Friday or Saturday night. No police in sight as a deterrent.

Michelle Dawson Agreed, they should ban them because some people drink and scoot. Ban cars as well because people still drink and drive after all these years. It is the only way.

It would be very expensive, any sponsors willing to back?

Mark Scarborough I’d ride with you