At 27 years of age, Tim D’abrera has already had what most would consider a lifetime of obstacles thrown his way including plenty of medical issues. But his resilience is unbelievable.

Born with an intellectual disability and profound deafness, Tim lives for sport, in particular, track and field. His preferred discipline is pole vault, but he competes in just about everything. He loves training and competing. Not at all fazed by where he is placed in events, Tim’s mum, Trish, says he just revels in the sheer enjoyment of being involved in sport.

He couldn’t run properly until he was ten years of age but swimming and continuing to run helped him develop. He was a good swimmer, representing at State level, but his real passion has always been track and field.

Tim competes weekly at Athletics ACT competitions for the South Canberra Tuggeranong Club and has represented the ACT at the Australian Championships on numerous occasions. 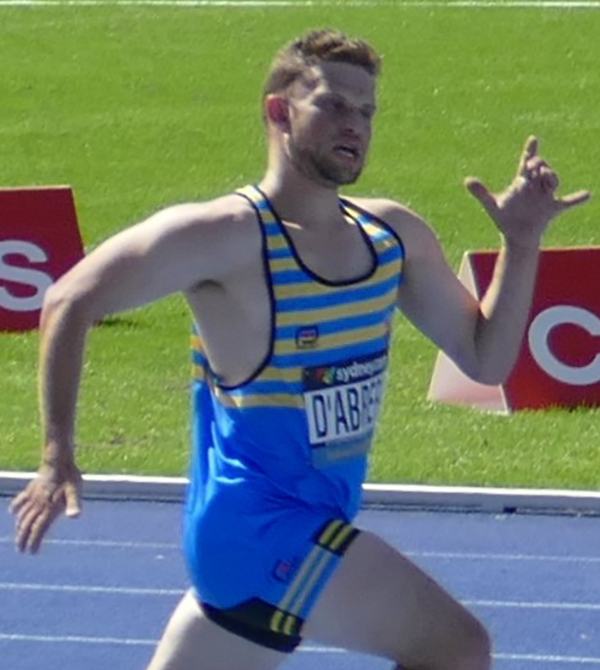 Tim carries the letter informing him of his selection everywhere he goes, even to work in garden maintenance with Koomari. Trish says, while he may not fully understand the significance, he is aware that it is important.

While we all should be celebrating his selection in the INAS Global Games, he needs to complete the INAS eligibility assessment, which includes an IQ test to ensure that he meets the intellectual disability criteria.

The problem is, as Trish discovered, there are no psychologists in Canberra able to administer the test because they don’t do signing, which is required because of his deafness. So Tim and Trish will be forced to go to Sydney for a test later this month at a cost of $1,500. A major part of this expense is the employment of someone who will sign for Tim.

Trish though, is used to hurdles. She knows that Tim’s passion for sport is so strong and the benefits associated with his participation are incalculable. So nothing will stop her from making it happen. Sport has given Tim confidence and helped with his social skills and gross motor development.

Trish is enormously proud of her son. “He’s been able to do so many things that people didn’t think he could; he’s amazing,” she says.

With the help of an incredibly supportive family, Tim is on the verge of achieving something the majority can only dream of; representing their country in sport.

It would appear the barriers placed in front of this family have only made them stronger and more determined.

Frank Nesci - 13 minutes ago
It would be great if Riot Act reached out to people at the auction in question. There was more than just the buyers that thou... View
News 12

Allison Correa - 24 minutes ago
So glad this is finally coming to light. I was part of the focus group for this and it’s been years and years in the making... View
Ashlie Caldwell - 24 minutes ago
Meleah Hampton we will have to take the kids View
Christine Kefford - 6 hours ago
Emma Treadaway amazing, I was wondering why they had the kid discovery area closed for so long! View
Property 8

whatwik - 1 hour ago
No guarantee the Federal authorities will be able to supply Pfizer or Moderna to the over 60s any time soon or indeed will wo... View
Ol L - 4 hours ago
A bit of time since this article seems to show that those rushing to the jab might have been better off waiting a bit longer View
Breaking 1

Pippa Jane Hendon - 1 hour ago
Absolutely misleading comments from the ACT government that the CBR COVID app has been used effectively to track this potenti... View
News 14

Melissa Dean - 2 hours ago
Brad Jones so sad Brad, they were great years working all together. ❤ View
Brad Jones - 6 hours ago
Condolences to Nigel's family. I always enjoyed talking tech with Nigel and a couple of drinks after work. RIP Nigel, mate yo... View
Opinion 120

Elizabeth Chen - 4 hours ago
I'd be happy if offered a good price for our block....they could do a knock-down dual occupancy! View
jorie1 - 15 hours ago
Keep the population low and there's no issue. Worldwide the population is far too high. Australia is an island and we do not... View
News 6

Rob Long - 5 hours ago
NAPLAN is a joke and should have been scrapped 10 years ago. It’s a pathetic measure of education and makes things much wor... View
Finally Relented - 6 hours ago
Haha..sorry. find it hilarious that Liberals are calling for this. Given their record is pumping money into well off private... View
Toni Isaacson - 7 hours ago
The situation in Australian schools is WAY bigger than Gonski. It would take generations and investment to improve. Finland h... View
Food & Wine 24

jorie1 - 14 hours ago
Schooling need to go back to a very basic agenda, nothing new age and not all the philosophical and political nonsense that i... View
show more show less
*Results are based on activity within last 7 days

A man allegedly continued to have sex with a young woman after she told him to stop, reportedly telling her,...
Opinion 120

For a planned city that is supposed to be a shining light on the hill, Canberra is rotting at its...
News 14

It's higher off the ground than any of its rivals. It has an all-wheel-drive system and driving modes for deep...
News 72

Concerns about the wait time for a simple surgery to remove her son's tonsils, adenoids and grommets has led to...
Opinion 35

For a planned city that is supposed to be a shining light on the hill, Canberra is rotting at its...
Food & Wine 24

@The_RiotACT @The_RiotACT
What do you think about a four-day workweek? An ACT Assembly Committee has released its discussion paper on the issue as is calling for public submissions https://t.co/4UJrYbKmk2 (27 minutes ago)

@The_RiotACT @The_RiotACT
An advanced material that could be used in space is being trialled in a partnership between the #ANU and a #Yass company https://t.co/olSqLYaB1z (1 hour ago)

@The_RiotACT @The_RiotACT
ACT Health is using the Check In CBR app to contact trace people who may have visited potential COVID-19 exposure sites in Canberra over the long weekend https://t.co/XieCFIlsKp (2 hours ago)