Qantas will slash its international flight schedule by 90 per cent until the end of May. Photo: File.

DO NOT TRAVEL is the stark warning from the Australian Government.

For the first time ever, the Department of Foreign Affairs (DFAT) has raised its travel advice to level four – the highest warning level – for every country in the world.

DFAT has advised that there may be a higher risk of contracting COVID-19 overseas.

“You may come in contact with more people than usual, including during long-haul flights and in crowded airports,” DFAT has warned.

“Health care systems in some countries may come under strain and may not be as well-equipped as Australia’s or have the capacity to support foreigners. You may not have your normal support networks overseas.” 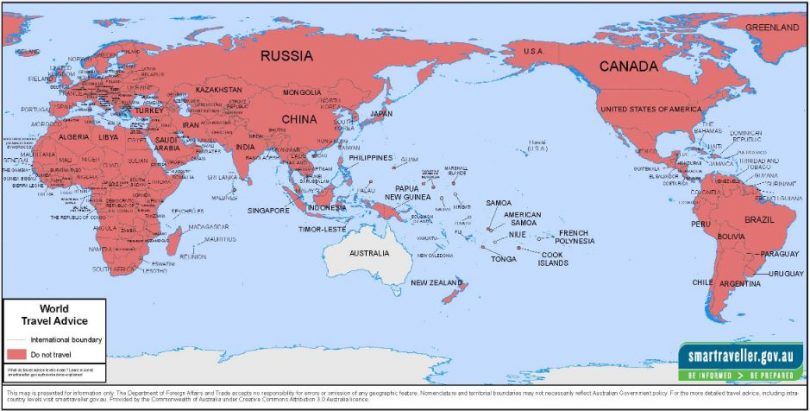 DFAT has upgraded travel warnings for every country to the highest level – recommending Australians do not travel overseas. Image: DFAT.

Prime Minister Scott Morrison said that Australia was listening to advice from health experts and enacting similar measures that we are seeing overseas.

“For those who are thinking of going overseas in the school holidays, don’t,” Mr Morrison said as he announced the indefinite ban on Wednesday morning (18 March).

“The biggest risk we have had is from Australians returning from overseas.”

Mr Morrison said that the vast majority of new cases are not transmitted on the flights themselves – which carry a relatively low risk – but rather from the individual catching the virus from another person while travelling.

The level four travel ban means that Australians may not be able to access consular assistance overseas.

#COVID19: We now advise you not to travel overseas. If you wish to return to Australia, do so ASAP by commercial means. If you can’t or decide not to, follow the advice of local authorities & minimise your risk of exposure, incl through self-isolation. https://t.co/GtDNz3JEyE pic.twitter.com/oESLILJQ1E

Following the decision to increase the travel ban, Mr Morrison said that the National Security Committee has made the decision to declare a human biosecurity emergency to recognise the threat posed by the coronavirus.

The announcement on the emergency declaration and heightened travel advice came the day after the Government issued a warning to Australians overseas to return home immediately on commercial flights saying that Government assistance could be limited because of lockdowns.

It may not be possible to return home later because of border lockdowns, DFAT said. Everyone returning to Australia, regardless of where they are flying in from, must self-isolate for 14-days.

“You may not be able to return to Australia when you had planned to,” DFAT said.

“Consider whether you have access to health care and support systems if you get sick while overseas. If you decide to return to Australia, do so as soon as possible.”

Virgin Australia is grounding its international fleet from 30 March until 14 June and will operate on a reduced schedule until 29 March, while its domestic capacity will be cut by 50 per cent.

Qantas has also announced it will slash its international flight schedule by 90 per cent until the end of May while Regional Express (Rex) wrote an open letter to the Prime Minister on Tuesday (17 March) saying they would not be able to survive the next six months without Government assistance.

This morning, the Government announced a $715 million rescue package that would include measures like freezing the fuel excise, air service charges and regional security fees to help airlines bounce back during the economic downturn.

Mr Morrison also said Australians should not travel to regional communities that are especially susceptible to the virus, such as remote Indigenous communities, but left it up to the states and territories to enact specific logistical measures and guidelines.

“This already happening in parts of the Northern Territory,” Mr Morrison said.

“It is about keeping teachers and others in those communities, and ensuring that people do not leave and come back, so the issues that have to be addressed here are principally around health.

“The premiers and chief ministers are working together with the Commonwealth to identify what areas of the country need to be subject to such an exclusion zone.”