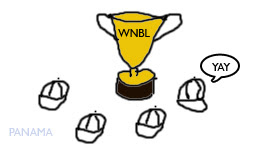 If you were sitting in front of me in the AIS arena last night, I apologise for what must be a suffering of temporary deafness.

In front of a sell-out (even standing tickets ended up being sold to accommodate fans) screaming crowd, the Caps downed the Boomers last night 61-58 to grab their 6th WNBL title. The lead seesawed (sickeningly if you ask me – although others might say the crowd certainly got their money’s worth for a thrilling match-up) between the Caps and Boomers 11 times throughout the four quarters, including ending the first half with scores dead even. There was no certainty of victory until the final siren went – and then the celebrations began.

What a game!!! All players stepped up and all deserve equal congratulations for getting the Caps, and Canberra, over the line. Congrats to Nat Hurst for the award of Grand Final Most Valuable Player.

It might have been a great game in terms of the scores being close throughout, and I guess the D was very good from both teams, but both teams’ offense was HORRIBLE. The Caps had opportunity after opportunity to put that game away and failed to take one of them, not to mention all the blown layups and wide-open mid-range jumpers.

I agree 100%. Great D was played from both teams but Canberra couldnt by a basket esp Bisho (who is my favourite player and a great girl).. Big ups to tolo though who had an absolute blinder! Hope she remains at Canberra next year!

It might have been a great game in terms of the scores being close throughout, and I guess the D was very good from both teams, but both teams’ offense was HORRIBLE. The Caps had opportunity after opportunity to put that game away and failed to take one of them, not to mention all the blown layups and wide-open mid-range jumpers.

It was particularly grating when they were up by 10 or 11 with 3 or 4 mins to go, Boomers went to a zone, and for the next three possessions the Caps shot 3s… you can’t just go into your shell and settle for outside shots you’ve been mostly missing all game because the other team zones up – you should attack the zone with good ball movement and cutters. Unless you are hot, which they were NOT, settling for 3s on every possession is a surefire way to lose your lead.

Anyway, the Caps were the far more talented squad, but the Boomers played a better team game, and in the end talent won out, particularly Bish’s rebounding which was clutch (although her shot selection and shooting were mostly awful – she’ll learn from that, hopefully).

Congratulations to the Caps, and anyone who questions Graf’s coaching doesn’t understand basketball – she is a superb coach, and i look forward to seeing her coaching the Opals at the next Olympics. Hope she signs that 4 year deal to stay in Canberra.

:o) I know… I just see a few missed opportunities each game that could really fire up their scoring records…

*settles back into armchair*

“We just need more consistent rebounding, both offensive and defensive – we’ve certainly got the height in the team to be outstanding in this area.”

I think the GF result indicates that things are just fine. How much more outstanding do you need than to be GF winners and clearly the best team all year?

That was such a nailbiting game! I had such a sore throat afterwards from all the yelling. Nat Hurst definitely deserved the game MVP, and I thought Tolo looked good when she started taking on the Bulleen girls under the net and getting right in there to take a shot. I was hoping to see a bit more out of Bibby, but still quite a solid game from her. We just need more consistent rebounding, both offensive and defensive – we’ve certainly got the height in the team to be outstanding in this area.

All in all a great GF game.

I read the other thread. It’s not like anyone cast any aspersions over Graf’s coaching ability in the first place.

Good onya Caps. Must be a good 20 years since a hoops game at The Palace had that kind’ve atmoshpere!

Most of those who took the piss who no doubt never have graced the sporting arena to a decent standard.

Having shared a brew with the aforementioned CG I can say that you will not find as professional a sporting coach anywhere else on this planet. If some of the modern day NRL coaches had as much intestinal fortitude as Carrie you wouldn’t see as many ass monkeys of the standard of Carney, Watmough and Stewart gracing the field. Someone would ahve done something before it got to the point of juvenile idiocy.

That’s the one thanks. Shame on all the people who put her down….

JB can we get a link to the post ages ago when there was plenty of taking the piss out of the coach on this very forum?

To those who took the piss… how do you like those apples?

A great night, a memorable match.

Some omissions of sight by refs and some argey-bargey.

I clapped my hands together until they resembled two plates of raw meat.

Oh, my seat was directly behind one young Mz Gallagher, thought earwig as I might I didn’t pick up any hot gossip. (She, however, may now be deaf from my SHOUTING!!)

Neither did I try chatting her up, using my extreme powers of Pommy persuasion, I’m sure you’ll be sad to note.

Excellent match, and the best team won by a narrow margin. The place was packed to the rafters, and much good entertainment was had, both on and off the pitch.

The Caps were not as dominant as I would have expected, and the Booomers played their hearts out. One Boomers player (No.4 ) a small dark skinned lass, was on the pitch for the whole of the match.

The usual suspects lifted the Caps game, my daughters fave player, Nat Hurst, was deservedly player of the match.

A_Cog - 3 hours ago
Should the ACT get its own police force? NO! It'd be run just as badly as every other ACT Govt service. Instead of buying ser... View
News 18

wildturkeycanoe - 5 hours ago
I'm still waiting for surgery, almost up to my "expected" 365 days on the Category 3 list. This is after initially waiting fo... View
HiddenDragon - 7 hours ago
This year's Annual Rates Assessment Notices tell ratepayers that 31% of rates payments go towards funding the health system -... View
Opinion 110

chewy14 - 5 hours ago
Russianafroman, I go from being called a right wing nut job to a Socialist Comrade in the space of a few stories these days.... View
russianafroman - 9 hours ago
Capital Retro I don't watch or listen to the ABC. But it wouldn't surprise me. View
Jose Black - 1 day ago
The ACT Greens have a major policy on supporting the community sector (including youth and mental health services) and giving... View
ACT Election 114

Reno Minopoli - 7 hours ago
Clinton Berry which part of "Three decades’ population growth "needed" do you not understand? Kids that grow up replace tho... View
Capital Retro - 8 hours ago
Well, I can't speak for everyone but I have certainly always "paid my own way". In the early days of SMSFs the deductibility... View
ssek - 8 hours ago
The greens and pretty good economic plan are an oxymoron. View
Property 1

Capital Retro - 9 hours ago
Coffs Harbour has The Big Banana, Tamworth has The Big Guitar, Canberra will have The Big Battery. View
News 47

Sarah Fox - 18 hours ago
Zalan Filip we will have to check it out! View
Zalan Filip - 1 day ago
Sarah Fox the one Soph was going on about... reminds me a bit of the huge market thing in Castlemaine. View
Angela Doyle - 1 day ago
Jacinta Elliott yes please! View
Property 35

@The_RiotACT @The_RiotACT
The Boat House is taking its offerings to the next level with the addition of an outdoor bar right on the shores of the lake https://t.co/rHkzcdz3kG (5 hours ago)