Captain Typho reading for the kids at the Multicultural Festival 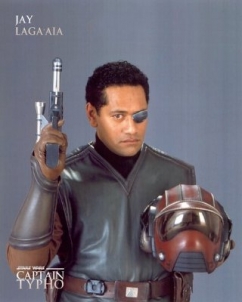 Joy Burch has word that Jay Laga’aia is going to be reading for the kids at the National Multicultural Festival Children’s Sanctuary:

“Jay is so versatile that although he’s going to be based at the Children’s Sanctuary I’m sure the adults will enjoy seeing him as well.”

The National Multicultural Festival is in Canberra City from 8-10 February and Jay will be at the Children’s Sanctuary on Saturday 9 February.

As well as a successful career in children’s entertainment, Jay is also an accomplished actor, perhaps best known internationally for his role as Captain Typho in the films Star Wars Episode II: Attack of the Clones and Star Wars Episode III: Revenge of the Sith.

The Children’s Sanctuary, co-hosted by the Office of Multicultural Affairs and Multicultural Women’s Advocacy Inc returns to the National Multicultural Festival for the second year after a successful debut in 2012 when with 1,500 children participated.

Bob Jones - 11 hours ago
Deb Wheare And Lynne Meredith... I've heard because of the more right someone who identifys as being an Aboriginal or Torres... View
Kev Martin - 21 hours ago
I find If you stop breaking the law, you don't get locked up View
Deb Wheare - 1 day ago
Jacob Torresan face palm View
Community 12

russianafroman - 24 hours ago
Will probably laugh at the annual Twitter meltdown, if there’s a protest maybe I’ll go and see what happens, hopefully th... View
Capital Retro - 1 day ago
Unless there is a new law directing me to go somewhere and do something I will be staying home and counting my blessings. At... View
Russell Nankervis - 1 day ago
I'm going to work. If the date changed I would be a little more keen to party View
Food & Wine 9

During the 'unprecedented' year we all experienced in Canberra during 2020, lots of new words and emotions entered my vocabulary....
Food & Wine 109

Seven things to do around Canberra this weekend (15–17 February)

@The_RiotACT @The_RiotACT
This remarkable seafront complex for sale near Narooma is your chance to purchase a unique residence with optional tourism business opportunity https://t.co/Fze10GhLLY (19 minutes ago)

@The_RiotACT @The_RiotACT
COVID-19 means the Gift of Life organ donation walk can't happen this year, but the need for donors is urgent. Have you had the conversation? https://t.co/SZexK7cwOq (1 hour ago)