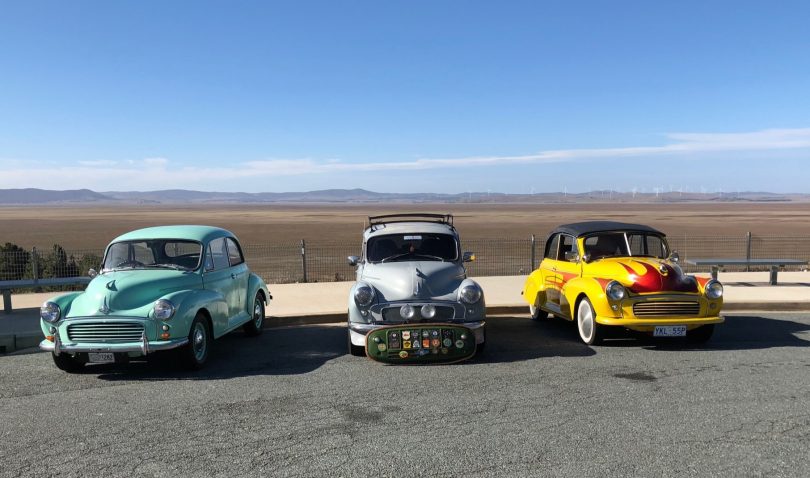 Around 100 Morris Minors from around Australia will converge on the Canberra region this weekend. Photo: Supplied.

Around 100 Morris Minors from all around Australia will converge on Canberra and the surrounding region this weekend (21-23 September) for the Morris Minor National Rally.

Hailed as the “world’s supreme small car” by Canberra’s Morris Minor Club spokesman David Moncrieff, Morris Minors from as far as Tasmania, Perth, Victoria and Queensland will meet in the nation’s capital.

Mr Moncreiff said he was looking forward to the display day on Saturday (22 September), where the special vehicles can be seen at the leafy Queanbeyan Town Park between 10 am and 3 pm, followed by a celebratory dinner.

“It is always a very social event and it is great to have people come and visit and have a look at the cars,” he said. “The rally was last held in the ACT in 1997 so it will be a special occasion for many people to see the cars in town again.”

Mr Moncrieff has been an attendee of the national rally for the last 12 years and owned his first Morris Minor back in 1971 when he went to uni. He is still a proud owner of the well-known car.

“Morris Minor owners are proud of their cars and the reception they get,” he said. “At car shows almost everyone passing by has a Morris Minor story.”

Keep an eye out for the fancy car on Sunday (23 September), with four conveys set to hit the region’s roads taking in the sights, including the Parliamentary Triangle, at the National Arboretum, and in Bungendore.

For more information, head to the rally’s Facebook page.

Aaron Perryman - 3 hours ago
Dont worry you won’t be able to hear the planes over the whinging. View
Kylie Prescott - 6 hours ago
The whole of Sydney is under Sydney’s flight path. Comparing Canberra to Sydney is a beat up. The new high school will be r... View
jwinston - 6 hours ago
Plenty of $1M plus houses in Jerra. Flight path doesn’t seem to affect the price of housing out there…... View
News 105

Katherine Boland - 4 hours ago
What an amazing building. Why can't it be saved and rnovated? View
Courtney Kenny - 6 hours ago
That's so heartbreaking 😪 View
Greg Myat - 6 hours ago
Emma Myatt I would love to. View
Public Sector 13

Mark Johanson - 5 hours ago
WOW, home affairs obviously have a lot on their plate! Talk about the big issues! View
Julie Maynard - 6 hours ago
Why? Too sexy? Can’t the old white men control themselves? From what happens in Parliament, I think I’ve just answered my... View
Marea Stefek - 6 hours ago
Laura Folkard Megan Aster-Stater nothing has changed 🙄... View
Community 10

Jill Slaven - 6 hours ago
Steph Jane great story Steph 😘 View
Paula Simcocks - 6 hours ago
In reviewing my own family history in 1850s - there was more religious tolerance than later on. In Angaston, SA all of the co... View
Mark Elvins - 9 hours ago
Interesting about being buried together. My great grandparents are buried together in the middle of the Binda cemetery becaus... View
Opinion 7

Brianna - 8 hours ago
Oh so true. The selfish actions of a few are greatly impacting the many. I am compromised, my husband is under going chemo. T... View
HiddenDragon - 10 hours ago
The re-purposing of the "we're all in this together" slogan for this pandemic is a perfect illustration of the saying that "i... View
Bernard Miller - 12 hours ago
At last a report that is well thought out, balanced and logical. It was a very pleasant read for a change, such a difference... View
Community 10

HiddenDragon - 9 hours ago
In the afterglow of the Sydney Games, Roy and HG had an amusing conversation about future host "city" candidates, including Q... View
Capital Retro - 13 hours ago
The ACT hasn't even got enough money to pay all the facilitation payments involved. View
Sport 19

Peter John McBride - 10 hours ago
I can remember doing a sports award night with Phil Lynch. With me at 5' 3", standing next to Phil it was quite the sight. View
Breaking 14

A bus named Sue: Canberra to get first women’s sleepbus