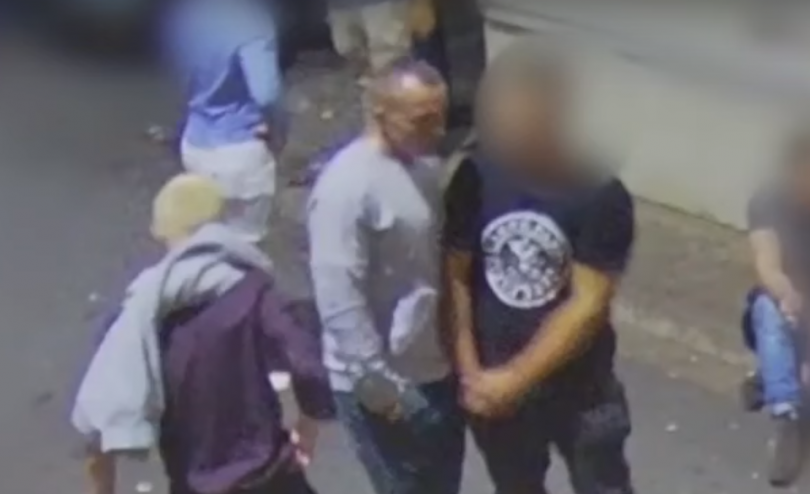 Police are looking for this man. Screen grab of CCTV footage.

Police have released footage of a man who allegedly assaulted another man in Civic after ACT Policing’s investigations failed to identify the man.

Around 2:30 am on 24 March, police attended Verity Lane near London Circuit following reports of a ‘one punch’ assault and subsequent fight between numerous people.

The victim suffered a large cut to the side of his head as a result of the assault.

An ACT Policing spokesperson said police have made “exhaustive investigations” to identify the alleged offender, including speaking with some witnesses and reviewing CCTV of the incident.

However, to date police have not been able to identify the man.

The alleged offender is described as Caucasian in appearance, about 180cm (5’11”) tall, with an athletic build and short brown hair. He was wearing a light grey top, blue jeans and white sneakers at the time of the alleged assault.

Police would like to speak to anyone who witnessed the incident, who may have mobile phone footage of the incident, or who may be able to identify the alleged offender from the CCTV footage.

Christopher Cuba Rabanal - 20 minutes ago
KN95 should be compulsory for all events View
Zuzette Kruger-Finch - 1 hour ago
Summernats and Floriade are our big income events here. View
Alan Vogt - 1 hour ago
No. Maybe in another 20 Years. View
News 23

Kay Pearce - 55 minutes ago
Mrs Prowse was my grandmother and I can well believe she would walk to Manuka… well into her seventies and early eighties s... View
Kay Pearce - 2 hours ago
Helen Kook thats just what Grandma (Mrs Prowse) would do!!... View
Helen Kook - 3 hours ago
Knowing my grandmother it would have been an easy walk back in those days View
Community 48

kenbehrens - 3 hours ago
Why has the ACT interpreted the National Plan as overriding jurisdictional sovereignty? The National Plan is an agreement of... View
gazmos - 4 hours ago
The casualty of the war on COVID has been the suffering of the families affected, and the truth to the rest of the community.... View
News 16