Centenary babies get their gong 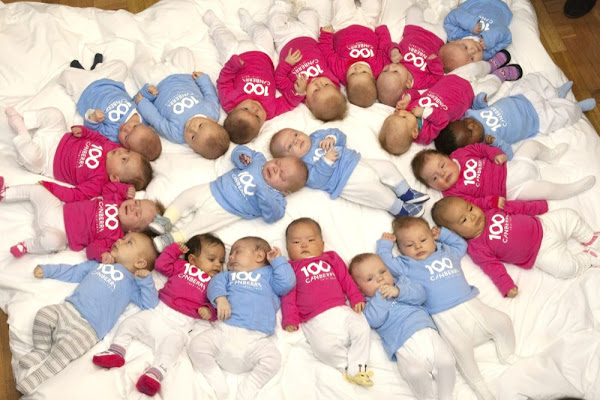 Chief Minister Gallagher has announced the presentation of medallions to the 21 Canberra babies born on the Centenary day:

Chief Minister, Katy Gallagher, has today congratulated 21 Canberra babies and their parents and presented them special centenary medallion to recognise that they were born on Canberra’s 100th birthday.

“In our centenary year we are recognising many Canberrans including those who have lived here for several decades and have seen our city grow. Today I am excited to acknowledge the babies who were born on Canberra’s birthday this year and those who will watch our city move into it’s second century,” the Chief Minister said.

The special medallions were produced to honour Canberrans in the Centenary year and the medallions have already been presented to Canberrans who are aged 99, 100 or older in January this year to celebrate the contribution these citizens have made to the city.

Looking at those babies one sees a lot more diversity than in Canberra’s political or media classes.

They’re all there being cute and what not and the one in the middle down the bottom is just dead serious.
haha

So many babies nom nom nom.

Did they all get a suck on the boob in the sky .. Sorry, I meant Sky-Whale?

who was the photographer brave enough to attampt to shoot twenty one couple month olds?? hope they got a medal, too!

(and more ‘or what’, poetix – not a patch on astromonkey and astrochicken! 🙂 )

Archie Mac - 47 minutes ago
It will always be MLC Tower to me. My family had the cleaning contract. We kids had great fun going up and down in the elevat... View
Nick Claydon - 5 hours ago
Sam L Oh it makes the food so tasty! View
Scott Humphries - 5 hours ago
It's one of my favourite buildings in Canberra. View
Community 39

Monica Tiffen - 1 hour ago
Here's hoping! View
Dylan McElhone - 2 hours ago
Claire McElhone sign me up haha View
Charles Godworth - 7 hours ago
But with global warming, they'll come back well before they're due and there will still be re-runs of Home and away on the bo... View
Property 29

David Rudland - 3 hours ago
Wow....really more units. I want to say so much but the words are expletives. View
Food & Wine 8

salvatge - 3 hours ago
Excellent commentary, from a local expert with skin in the game! View
Mello - 4 hours ago
It is time to stop this self government experiment. We simply don't have the numbers to collect the revenue.... View
Robert - 6 hours ago
Is art only to be pretty? I admit there is definitely a place for that but can't it also be other than that too? I'm not a hu... View
Property 3

Dan Hinterreiter - 8 hours ago
"I am Ledgend"...... 🤣🤣🤣🤣 View
show more show less
*Results are based on activity within last 7 days

A Belconnen GP surgery was forced into lockdown yesterday (21 January) over concerns that a patient had recently been to...
Opinion 198

Who would have thought that Canberra's Nick Kyrgios would morph from tennis brat and national embarrassment to statesman of the...
News 24

Healing with the help of art

Calls for ‘restrictive’ home birth trial criteria to be relaxed

@The_RiotACT @The_RiotACT
As nine Aboriginal nominees shared the Australian of the Year categories in 2021, what does it mean for them to be honoured on January 26? https://t.co/dDnrIpyGY6 (60 minutes ago)

@The_RiotACT @The_RiotACT
More than 1000 Canberrans remain on the waiting list for home care packages despite government announcements of more packages to come https://t.co/Ap1Ar8jmtA (2 hours ago)

@The_RiotACT @The_RiotACT
James Coleman is not a fan of the ACT Government spending money on the Skywhale hot-air balloon while there are roads to be fixed https://t.co/PF8wiLlh6n (4 hours ago)