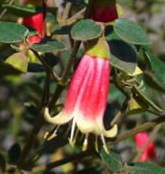 Yesterday was a big one in Centenary of Canberra news.

Firstly we had the happy news from the Chiefly Stanhope that a “Correa cultivar” has been chosen to be the “Centenary native plant”.

(This is slightly curious piece of naming as the term “cultivar” means: “A race or variety of a plant that has been created or selected intentionally and maintained through cultivation”. So not entirely “native” then?)

“I am pleased to announce this brand new variety of Correa will be the official commemorative native plant for our 100th birthday. It is an attractive, easy to grow, hardy shrub which features a profusion of two-tone, yellow and red bell-like flowers and deep green foliage,” Mr Stanhope said.

“The Correa flowers throughout autumn and will add another splash of colour to Canberra gardens during our birthday celebrations in March 2013.

“March 2012 is the anticipated release date for the new plant so that it will be growing in gardens locally and nationally by 2013,” Mr Stanhope said. “Between now and 2012 the plant stocks will be increased and then be distributed to nurseries for sale in the ACT and interstate.”

Just so you can feel included they’re calling for entries for a naming competition. (Tip for new players, if you want to win naming competitions pick what the committee has already decided they want it to be named).

But that’s not all!

Perhaps realising that native plants and centenary shiraz won’t float the boat of the entire community Mr. Stanhope is also calling on the kids to send in their thoughts on how they want to celebrate the centenary.

Someone involved has a keen understanding of today’s youth, offering participants in the survey a ticket in the draw for a $300 gift voucher at JB HiFi.

A buffet of speed and cough syrup is probably out of the question but they might just be able to swing a Presets concert if you ask nicely.

I’ve got craploads of those bluebells…. and I’m not in the ACT! So even if Urban Services make them all into woodchips, NSW might send you some as foreign aid.

What! Give and not take for a while.

I think the Bluebells you guys are referring to are the Campanula’s which are commonly seen on nature/median strips and parks around Canberra. They are a much lighter blue colour than the Royal Bluebell

The ACT floral emblem, the Royal Bluebell (Wahlenbergia gloriosa) is more likely to be found in areas in and around the Namagi National Park.

I’ve got craploads of those bluebells…. and I’m not in the ACT! So even if Urban Services make them all into woodchips, NSW might send you some as foreign aid.

So not entirely “native” then?

Cultivars of native plants are native. There are plenty of cultivars planted at the National Botanic Gardens. I think it is a good idea to have a centenary plant. The Wahlenbergia gloriosa or Royal Bluebell will remain our floral emblem.

What happened to the bluebell?

They’re being cleared from the reserves where it used to grow by the Department of Urban Services, with their policy of killing everything except for a few trees, them mulching with bark chips.

That flower looks awfully like the Correas I have in my garden! And one of them was murdered by a self-sown rogue cherry tomato.

Maybe a Canberra Centenury Mushroom might have been more appropriate?

What happened to the bluebell?

Sounds entirely appropriate to have a cultivar in an entirely manufactured town that’s only kept alive by blowing billions of dollars of taxpayers’ money on it.

Sounds entirely appropriate to have a cultivar in an entirely manufactured town that’s only kept alive by blowing billions of dollars of taxpayers’ money on it.

Claire McElhone - 11 minutes ago
Dylan McElhone my dreammmm View
Josh Taylor - 12 minutes ago
Max Heffernan wouldn’t do it with me dad View
Jill Howcroft - 13 minutes ago
I suspect they won’t ever wake up and in the off chance they do, I can only imagine the consequences such a foolhardy act.... View
Food & Wine 113

Bradley Heanes - 9 hours ago
Didn't the defence department already appologise for this? (Even though they were assisting the RFS at the time) Didn't they... View
franky22 - 11 hours ago
Why can't the ADF simply state that they made a mistake. View
News 21

Tramcar Trev - 15 hours ago
Simple do what other regions do, use local volunteers to staff the visitor centre. View
show more show less
*Results are based on activity within last 7 days

Notes from the Kitchen Garden: let’s talk about zucchinis