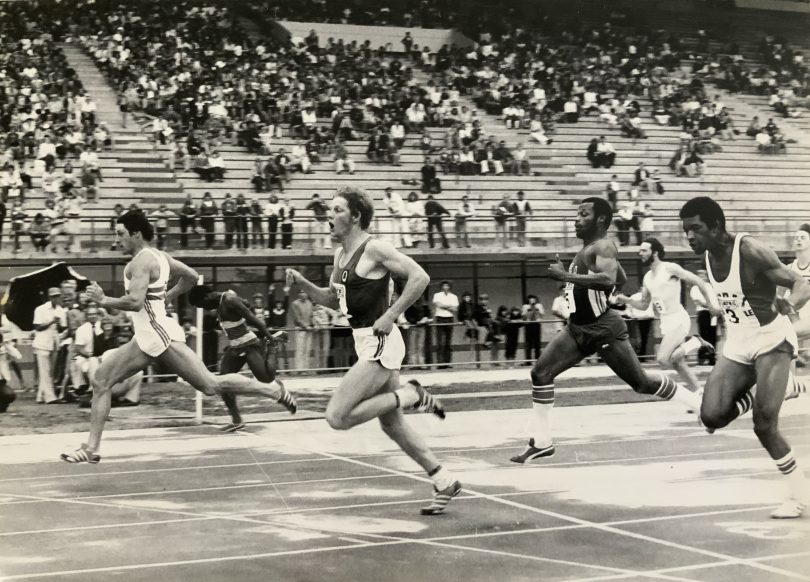 Sixty-one-year-old Paul Narracott concedes some of his patients are surprised when they discover their mild-mannered dentist ‘waddling’ along the corridor is widely considered one of Australia’s greatest 100-metre sprinters.

His record on the track was impressive, with many highlights.

Paul had high expectations heading into the 1984 Los Angeles Olympic Games. He thought he had a slim chance of winning a medal in the blue riband 100-metres event on the track.

Those expectations were well-founded. He had finished seventh at the 1983 World Championships in Helsinki, becoming the first Australian since Hec Hogan at the 1956 Melbourne Olympics to compete in a world-class 100-metres final. 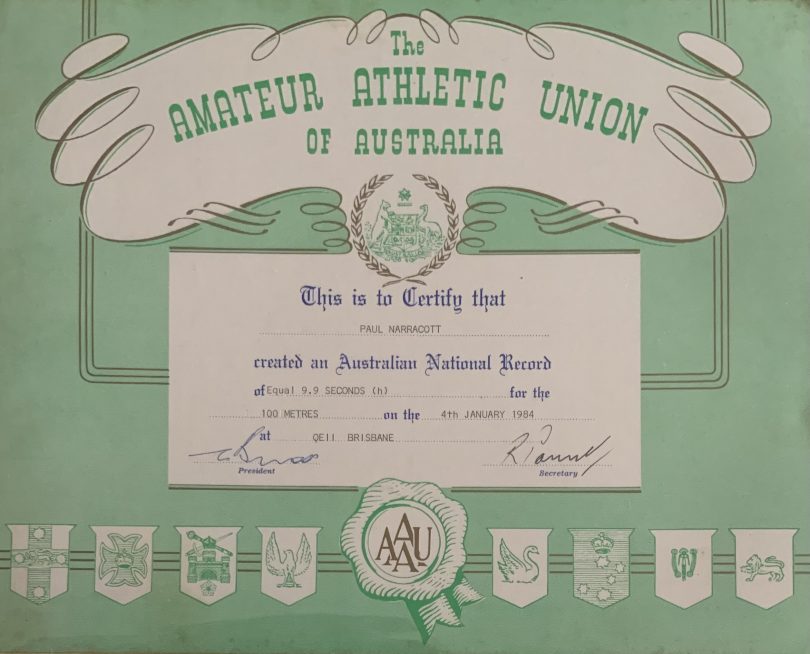 Paul had also run under 10 seconds, albeit with hand-timing in Brisbane in 1984. It’s not in the record books because from 1977 sprints had to be electronically timed to be official.

“It was nice to have done that. At that particular point in time, I was probably in the form of my life and I guess the coaching staff would say that’s what we expected you to do. It’s probably where you’ve got to be if you’re going to be running for Australia at the Olympics in men’s sprinting.”

Another indicator of his good form was his win over Carl Lewis in a 60-metres sprint before the Olympics. 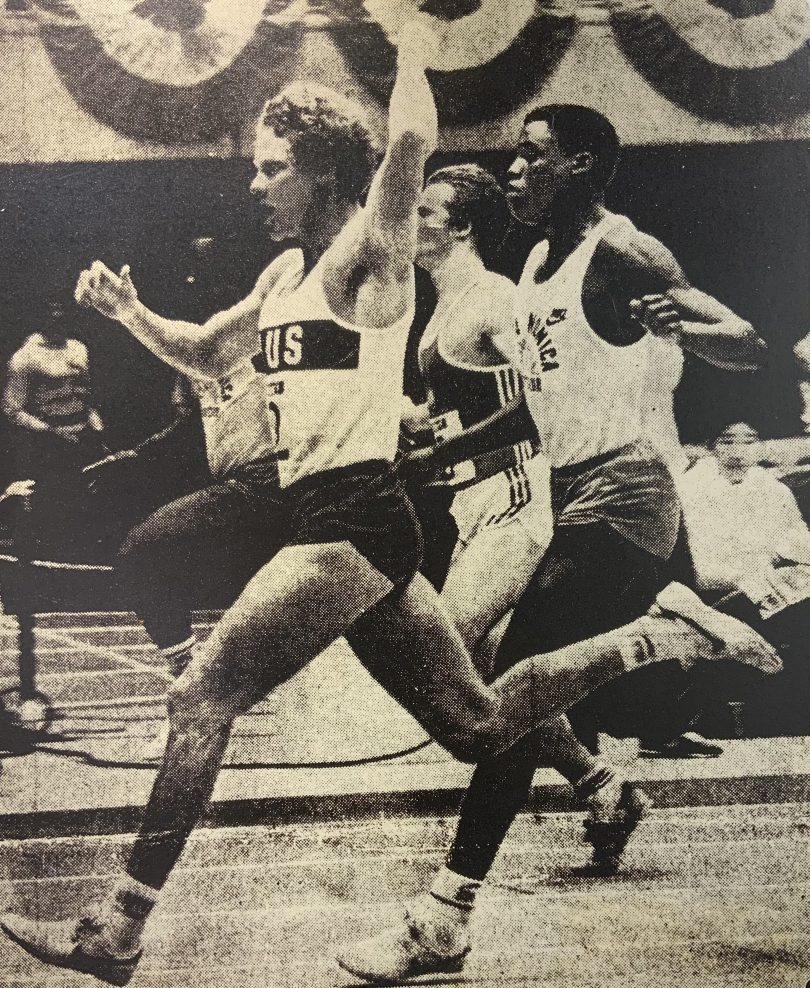 Paul Narracott up against, and beating, Carl Lewis in Osaka, January 1984. Photo: Supplied.

Six months later at the Olympics, he made it to the quarter-finals in the 100 and 200-metres.

It probably needs to be pointed out that to make it that far is a significant achievement in the most contested event at the Olympics.

He found himself back in the news just last month following the run by Sydney’s Rohan Browning in which Browning broke the 10-second barrier, albeit wind-assisted.

Having broken the 10-second barrier, Browning joined a select group of Australian athletes which included Paul.

Patrick Johnson did it three times, but only his 9.93 in 2003 was considered legal and remains the only time officially recorded by an Australian under 10 seconds.

Paul was one of the first track and field scholarship holders at the AIS, effectively paving the way for the likes of Patrick.

“It’s a small club in Australia. To do it is great. I wished I had done it at the Olympics but it didn’t happen,” Paul said.

“Over a career there are lots of downs, lots of bad days, and a few good days. I think at the end of your career it’s nice to look back and have a few bright moments to remember and that run in Brisbane in 1984 was one of those.”

Not content with competing at the Olympics, Worlds and Commonwealth Games in track and field, in 1992 Paul became the first Australian male (or female for that matter) to compete at both the summer and winter Olympic Games.

“I just loved playing sport, so it didn’t matter what it was. An opportunity came up to get involved with the bobsleigh team at the time. I’d seen it on television and I thought, ‘This looks like a lot of fun and you really only get one chance while you’re young’, so I had a crack at it and things fell my way and I was able to get to the 1992 Albertville Winter Olympics. It was great,” said Paul. 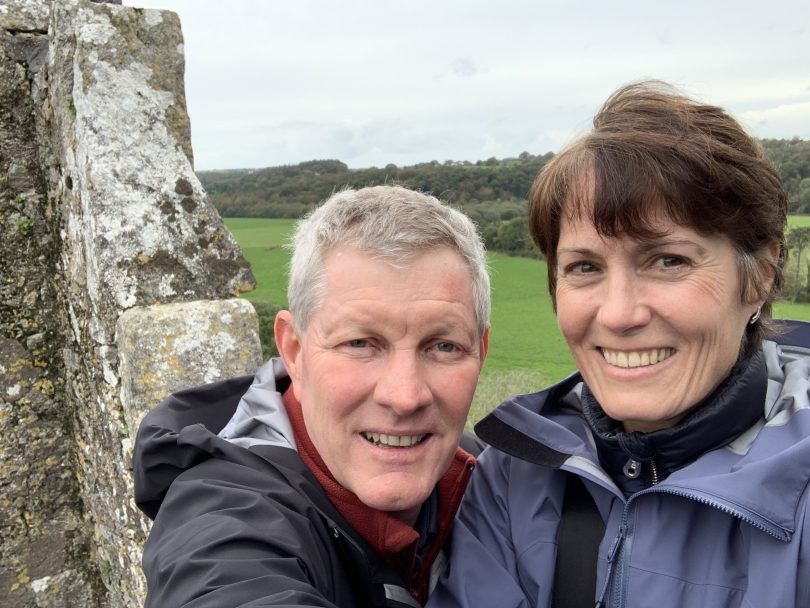 It was a remarkable sporting career which is very much in the distant past with his focus these days on his family, his work as a dentist for the past 30 years in Canberra, and bettering his golf handicap.

Despite never going anywhere near the magic 100 metres barrier again, in many respects, he shows no signs of slowing down.

One Response to Champions among us: Canberra dentist Paul Narracott was one of the fastest men on the planet
Filter
Showing only Website comments

Great tribute to a great bloke who is also the best dentist in Canberra.

opso - 2 hours ago
As per the first couple of sentences of this story 'From midday today, ACT residents can travel for any reason to an expanded... View
Sam Oak - 2 hours ago
There is no reason for being pedantic with the rules. Ironically as NSW reopened the cases have plummeted showing that Austra... View
JC - 3 hours ago
Yes you have missed something. It is now both directions. The quote below is from the first web page you fine if you google A... View
Property 16

TimboinOz - 2 hours ago
hi Jimmy, Is Steve B. still around?... View
bj_ACT - 8 hours ago
I prefer the televised Canberra Sitcom “Parliament House”. Some of the characters are unbelievable. That Barnaby Joyce ha... View
Business 1

Capital Retro - 4 hours ago
What about the existing multi-mode electricity generating Liddell Power Station and the purpose build (for cooling) Lake Lidd... View
chewy14 - 5 hours ago
Nobody, That isn't an answer. Although it's obvious why you can't properly answer the question. For right or wrong there is n... View
nobody - 7 hours ago
Chewy14, all 45 countries who have-are-will operate nuclear power has faced that question, and each has managed to find their... View
News 3

Erica Burford - 18 hours ago
I think the problem is, the NSW Government doesn't have a "register of significant indigenous culture sites" they can be decl... View
News 46

@The_RiotACT @The_RiotACT
Melany Batley's quaint Italian-style #gelato carts have been popping up at weddings, birthday parties, and other special events across the region since 2019. Here's how she got her start https://t.co/L9Ghkk36dG (32 minutes ago)

@The_RiotACT @The_RiotACT
At 43, @BrumbiesRugby front rower Louise Burrows may be twice the age of some of her #Brumbies teammates, but she's still at the top of her game and is determined to be selected for next year's Women's #Rugby World Cup https://t.co/cjDGzSy61w (3 hours ago)