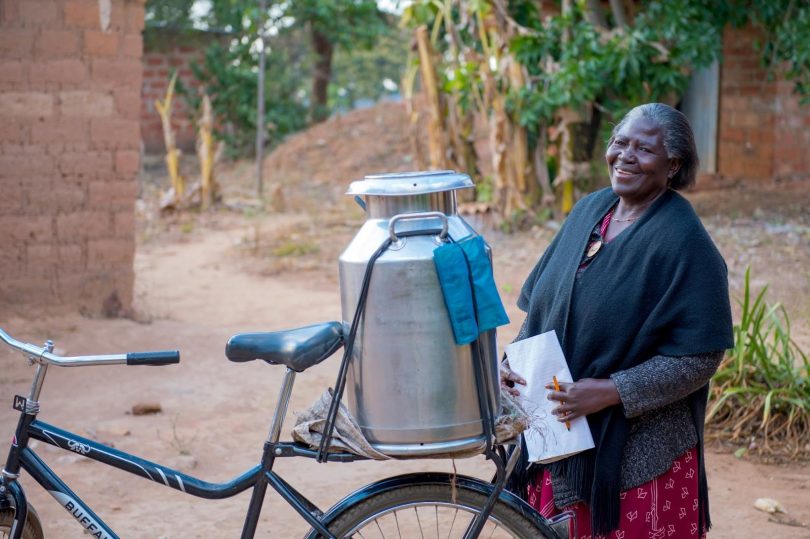 Canberra is a great place to get out on a bike. For those who have discovered the joy of cycling, a bike can be a means to better health and well-being, a way to reduce stress, a taste of freedom and a trusted friend. But for people in developing countries, a bike can mean so much more. We were moved recently to hear about global charity, World Bicycle Relief, and the work they do providing bikes as a tool for empowerment for people living in poverty.

World Bicycle Relief was set up in the wake of the catastrophic 2004 Boxing Day tsunami, by Leah Missbach Day and her husband F Day, who recognised that bikes could play a role in getting people through the wreckage of the disaster to places that cars could no longer access. Knowing a standard bike would not be tough enough, they came up with the Buffalo Bicycle, a heavy-duty bike that could carry heavy loads and was easy to repair. 24,000 Buffalo Bicycles were distributed to Sri Lankans left homeless by the tsunami, and World Bicycle Relief was born.

Since then the charity has distributed over 400,000 bikes to people in developing countries. Distance can be a huge barrier for people whose primary mode of transport is walking, and access to bikes can have a massive impact on their ability to access education and healthcare and gain financial independence. 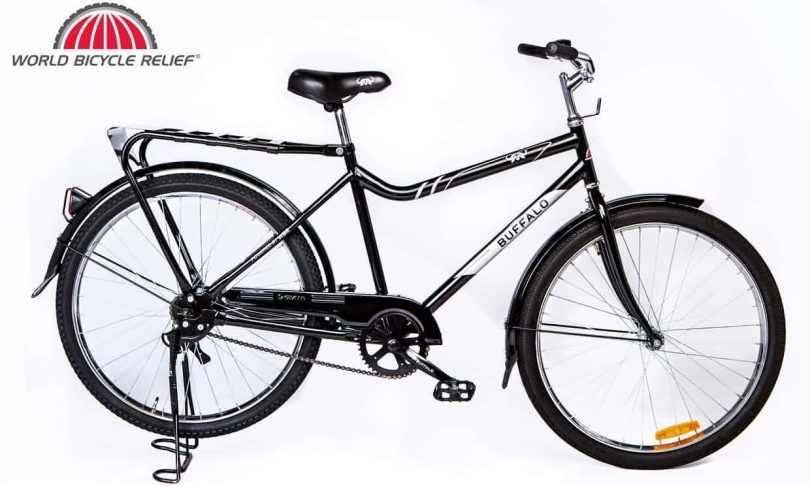 The Buffalo Bicycle is a heavy duty bike designed for rugged terrain and to carry heavy loads. Photo: supplied.

One of World Bicycle Relief’s key successes has been removing roadblocks to the education of girls. In sub-Saharan Africa school attendance by girls is low, with many walking more than 10 km to and from school each day– a daily routine that is tiring, time-consuming, and often highly dangerous, with many at risk of attack or sexual assault. Bikes protect girls from violence and get them to school four times faster than walking, allowing them to complete homework and chores more quickly and easily. Girls who have received a Buffalo Bicycle have up to 28% increase in school attendance and 59% improvement in academic performance. 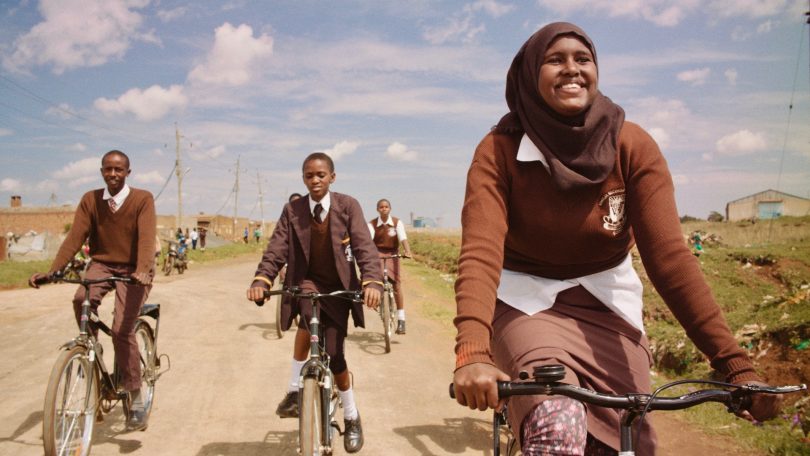 Buffalo Bicycles are also leading to improved healthcare. Over 140,000 community health workers in sub-Saharan Africa have been mobilised, enabling them to travel further, see more patients, and spend more time with them. This allows them to access patients in remote areas and treat medical issues before they become critical. World Bicycle Relief is also helping workers and small business owners improve productivity by providing bikes to get people to and from work, transport goods, and travel to local markets. 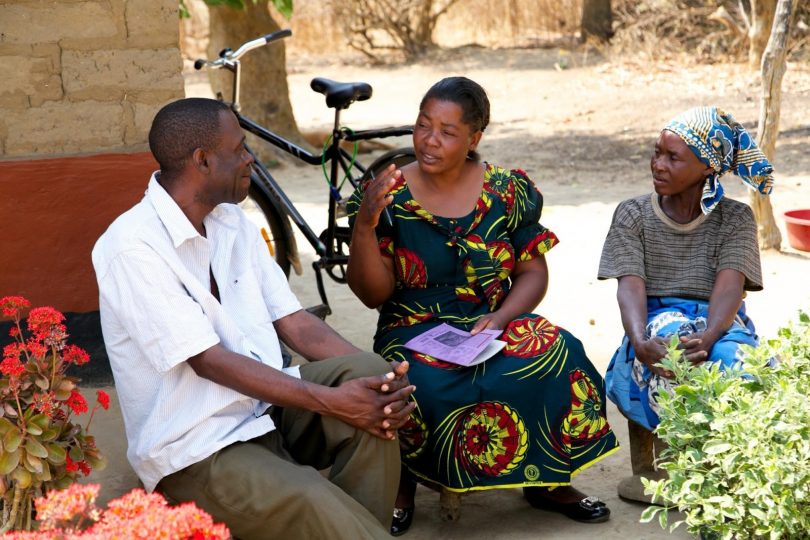 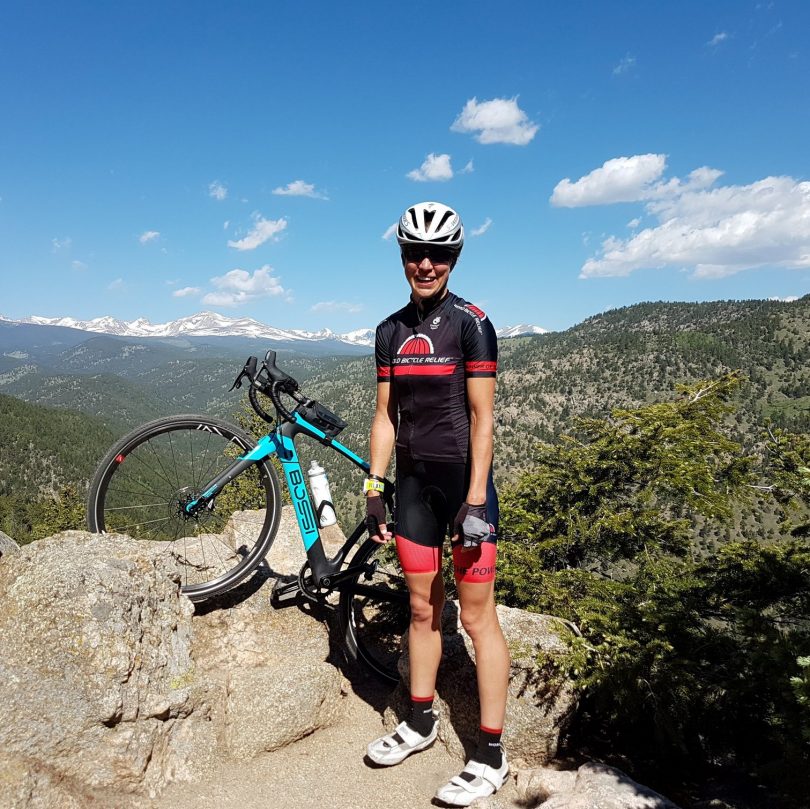 “I love to set my own goals, work hard, and achieve results,” said Anna. “I’m incredibly lucky and grateful to live this lifestyle, where cycling gives me a sense of joy, freedom, purpose and power: it enables me to explore, to journey, and to grow.

“I’ve come to realise that the good old, humble bike provides a similar opportunity – albeit in a very different sense – to many disadvantaged people worldwide; and how aligned my own feelings for cycling is to the work being undertaken by World Bicycle Relief,” said Anna

As a World Bicycle Relief Ambassador, Anna has raised money through her own training, and through events such as an International Women’s Day fundraising ride held in conjunction with EY and the CycleLifeHQ team.

“Just two weeks ago the very first UN World Bicycle Day was held in recognition of the power of the bicycle as a tool for international development. For me, the work of World Bicycle Relief is living proof that bicycles can change lives, and that it is a truly powerful and transformative machine”, said Anna.

World Bicycle Relief is an awesome charity. Everyone please get behind it here in Australia - bicycles can change lives!!!

Ol L - 33 minutes ago
Stupid. Increasing fines won’t stop anything. Look at the near annual fine increases for speeding. View
James Forge - 46 minutes ago
Grant Rixon I'm not saying that. I'm against cyclists flouting the current law by not slowing town to... View
Grant Rixon - 1 hour ago
Mitchell George Driver i agree with you mate walk the bike no problems Ride the bike make the rider pick do bikes belong on t... View
News 39

Tom Worthington - 1 hour ago
Clearly the ACT Auditor-General needs to look into what went wrong with ChooseCBR. View
Adam Cass - 2 hours ago
Trying to save face is very different from engaging with constituents Tara. You’re a Minister now, not a blogger. A good wa... View
Tara Cheyne MLA - 2 hours ago
You don't have to engage with me if you don't want to Adam, but engaging with people is actually part of my job - and doing i... View
Property 3

sammo1 - 1 hour ago
It almost already is! Most of the population work and shop in Canberra or Queanbeyan. Its really not that far out.. It seems... View
consumeradvocatecanberra - 5 hours ago
Hmm, what a great place for a satellite city for Queanbeyan or even Canberra (thinking Oaks Estate-perhaps not workable) but... View
MERC600 - 5 hours ago
It's been quite a while since I wandered into the Captains Flat local. Back then they were only using one corner of the place... View
Food & Wine 5

nobody - 4 hours ago
Great news, well done. View
switch - 6 hours ago
I think they mean Delta Myna major pest. View
Capital Retro - 6 hours ago
What a ripper of a headline. View
Courts & Crime 1

Julie Macklin - 4 hours ago
Flannelette shirt. That's all I have known them called and what I have always called them. Never hard of the other words befo... View
Brisal - 6 hours ago
Define "Northern Tuggeranong". Most suburbs have their small shopping centre with a Supabarn or IGA or similar, within short... View
Tony Jim - 6 hours ago
Flanno for sure. BCF have the best and warmest View
Business 10

A Supreme Court jury has found Hayden Smedley, 21, not guilty of having sex with a woman without her consent....
Community 51

@The_RiotACT @The_RiotACT
All-in-one IT packages, including professional support, are now available for small businesses and charity groups in Canberra from @wotlink, without the big costs normally associated with data security and systems management https://t.co/W04L2p98KJ (1 hour ago)

@The_RiotACT @The_RiotACT
The ACT has shut its border to non-residents who have visited seven LGAs in the Greater Sydney region just days ahead of the school holidays, and Chief Minister Andrew Barr has recommended Canberrans avoid travelling to Sydney due to the COVID-19 risk https://t.co/jL4eu6eSHx (1 hour ago)

@The_RiotACT @The_RiotACT
E-scooters could soon be on their way to Mitchell and Gungahlin after a motion was passed in the Legislative Assembly approving the expansion of the scheme https://t.co/nOkxUWWgdh (3 hours ago)