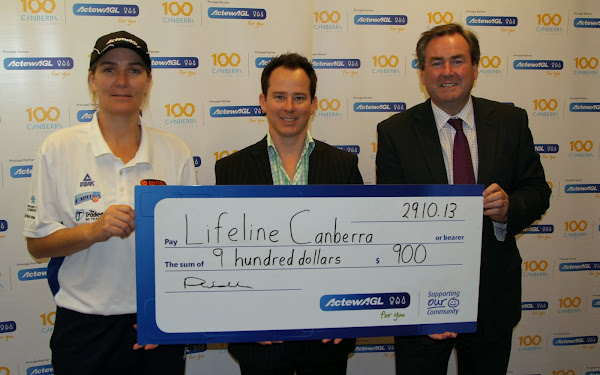 A collection of media personalities took on the ActewAGL All Stars in a charity match to raise money for Lifeline Canberra.

A charity basketball match between ActewAGL All Stars and a Media team has netted $900 for crisis support and suicide prevention charity Lifeline Canberra.

The All Stars dominated the match as 12 baskets were scored, with $50 passed onto Lifeline Canberra for each shot which went in. Unfortunately, no $100 3 pointers were scored despite the referee and Caps Man making attempts in addition to the players.

The star studded All Stars were led by crowd favorite Cal Bruton while 104.7’s Joe Gleeson was strong for the Media Team.

ActewAGL Marketing and Corporate Affairs Director Paul Walshe says there was plenty of fun and banter on the day.

“I’m the first to admit I was there to make up the numbers. But, Cal Bruton and Ross Solly kept us all entertained with their Harlem Globetrotters style antics and importantly we raised $900 for Lifeline.”

A $900 cheque will be presented to Lifeline Canberra. ActewAGL provided $600 from the 12 baskets scored during the match while Basketball ACT chipped in a further $300.

Alex Warne - 3 hours ago
Jarrod Sean Id suggest looking into the Spire Project. There’s lots of money being spent upgrading Canberra Hospital View
Juliane Samara - 4 hours ago
Jarrod Sean if they waited until the hospital was over run, and then decided to build the temp hospital, lives would have bee... View
Jane Stubbs - 7 hours ago
Money well spent.... View
Business 16

Tom Adam - 4 hours ago
*Riot-Act Rubs Hands *Canberra cries at the loss of the last printed journalism available as all other magazines and newslett... View
HiddenDragon - 7 hours ago
"If the printing presses are mothballed, the rationale for maintaining a large commercial building in a central location woul... View
Lindsay Noone - 9 hours ago
Julia can you get some goss? View
What's On 7

George Watling - 5 hours ago
Will Andrew Barr's relentless war with nature never stop. 40,000 trees have been cut down and dozens of our green spaces have... View
News 44

Maria Greene - 7 hours ago
Frank Valzano yeah but how would Brendan or pollies benefit? View
Frank Valzano - 8 hours ago
Use the money to provide mental health support for current and former soldiers suffering from PTSD.😡 View
Lifestyle 2

Liz Widdicombe - 8 hours ago
If these guys were on during the week I would go back to listening to 104.7 for sure. View
Barbara Mobbs - 9 hours ago
Love you guys! All about the Community we live in 😊 View
Food & Wine 21