ACT Chief Minister and Treasurer Andrew Barr says the Government will not be able to help every business or resident during the pandemic. Photo: Region Media.

The Chief Minister says the ACT should weather the worst of the COVID-19 economic storm because of an expanding public sector and is likely to rebound sooner from the crisis, although unemployment is likely to reach as high as six per cent this year.

There will be damage as the Commonwealth Treasury estimates Australia’s unemployment rate is headed to double digits for the first time since 1994, but the public service will buffer much of the impact felt in other jurisdictions.

In real terms, 12,000 Territorians will lose their jobs this financial year as the ACT’s unemployment rate jumps to 4.1 per cent before June. Federal Government figures indicate that around half of those jobs have already gone since March.

Treasury estimates say that unemployment will then climb further to 5.5 per cent in the following 2020-21 financial year. The likely impact for the 2020 calendar year overall will reach close to six per cent in total.

The Deloitte Access Economics March 2020 Business Outlook report suggests that these numbers won’t recover to their pre-pandemic levels until at least the 2022-23 financial year. Deloitte forecasts on a fiscal year basis, while the Treasury’s predictions rely on quarterly data.

But the Deloitte report also points to a stable public sector employment as insurance against ballooning unemployment figures.

“On the employment front, Canberra is mostly shielded from the mass unemployment seen elsewhere. Big government policies mean bigger governments. That’s why the fall in employment is lower in the ACT than elsewhere,” the report says.

“It is also why, after the initial fall, the rebound in ACT jobs comes on a lot sooner.”

An expanding private sector filled with cafes, bars and restaurants that have been forced to closed or taken a massive hit in revenue has hurt the economy. However, many casuals, part-timers and students are returning to their ‘home cities’ from Canberra as hospitality jobs dry up and education moves online. This will mask some of the unemployment pain, the report says.

The Commonwealth Government says the national unemployment rate will climb to a peak of 10 per cent in the June quarter, up from 5.1 per cent, but these numbers could have been as high as 15 per cent if the $130 billion JobKeeper subsidy was not put in place.

One per cent of people who have applied for the JobSeeker payment are from the ACT. Mr Barr said this indicates that around 6,000 extra Canberrans are out of work, although Canberra is in a better position than most cities. 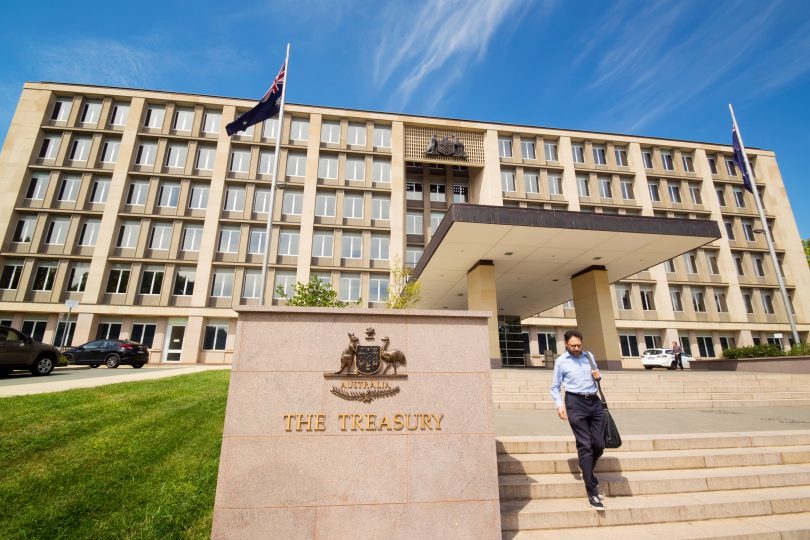 Treasury estimates the jump in unemployment would have been double the current forecast if the Commonwealth’s JobKeeper stimulus had not been announced. Photo: File.

If the unemployment rate does peak at 10 per cent, 1.4 million Australians would be out of a job, setting a new record.

Westpac Economics estimated the unemployment rate could have peaked as high as 17 per cent in June without the subsidy. They’ve since recalculated their forecast to 9 per cent for the June quarter after considering the economic implications of the stimulus.

The April unemployment rate held steady at 5.1 per cent according to the Australian Bureau of Statistics.

A $20 million Jobs for Canberrans fund has also been set up and smaller infrastructure projects like maintenance and repair work will be brought forward to help keep residents employed in the Territory. The program will expand the ACT public sector with an influx of casual workers who have lost jobs in other industries and is set to go live within the next week, Mr Barr told reporters on Tuesday (14 April).

But it could take Australians a decade to recover from the economic impacts of the virus, Mr Barr said, comparing the economic disaster to the aftermath of World World II.

Australia is now in the suppression phase of the pandemic Prime Minister Scott Morrison said last week as the country continues to flatten the curve following increasingly strict lockdown measures.

The measures play into Australia’s hibernation strategy which aims to essentially press pause on the economy and have governments, landlords and banks defer some rates and payments until businesses who have shutdown can begin trading again.

Positive cases of COVID-19 in Australia continue to grow at around one to two per cent a day, much lower than the 27 per cent high in late March.

Dorsia Darling - 7 hours ago
Yep - another thing we can blame the LNP for. Bloody Abbott 😡 View
Donna Venables - 9 hours ago
Let them use Zoom. They can find out for themselves how bad the Aussie internet really is. Maybe then, there will be somethin... View
News 6

O L - 11 hours ago
Went through Cooma last week and thought I’d get a covid test, no way as the covid testing was closed an hour for lunch???? View
Sport 15

@The_RiotACT @The_RiotACT
At the end of a busy week, our latest newsletter wraps up all the stories that have had Canberrans talking, from the future of public housing on Ainslie Ave to a new, permanent Lifeline bookshop https://t.co/GBOLyb6Jxf (8 hours ago)

@The_RiotACT @The_RiotACT
The peafowl have been a feature of Narrabundah for 30 years, and now they have their own street sign to help keep them safe https://t.co/y4cynU4Vbs (9 hours ago)

@The_RiotACT @The_RiotACT
The Bushfire Royal Commission has heard that Australia's ability to fight bushfires could be hampered due to dependence on one US supplier of fire retardant, a situation recently highlighted by COVID-19 manufacturing shutdowns and delays https://t.co/0l2YEOtvoU (11 hours ago)