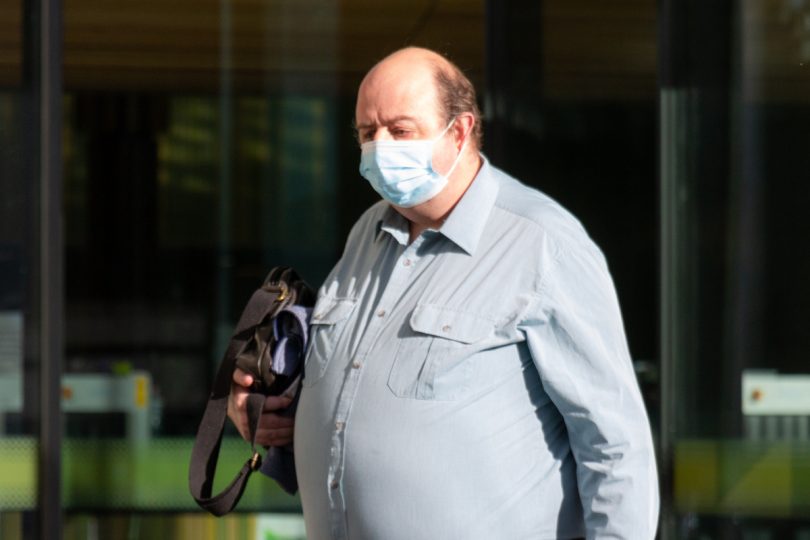 Jason Scott Francis, 43, leaves the ACT Courts on Thursday after being sentenced over the assault on a three-year-old. Photo: Albert McKnight.

Ten years into a career in the childcare industry, Jason Scott Francis snapped and threw a three-year-old boy headfirst into the ground because the infant refused to pick up toys in a playground.

When the 43-year-old was sentenced in the ACT Magistrates Court on Thursday (30 September), Magistrate Beth Campbell told him that: “The outburst of anger … was unacceptable, inappropriate and not forgivable.”

He used to be employed as a casual childcare worker at Lavender Lane in Conder.

He was supervising children in the centre’s playground on 2 December 2020 when he yelled at the boy to help pick up the toys because he had been playing with them, but the boy refused and jumped away onto play equipment.

Francis grabbed the boy by the leg, picked him up and threw him headfirst to the ground.

The boy’s mother wrote a statement declaring that her son was outgoing, friendly, and “a crazy three-year-old daredevil” before the incident.

But afterwards, there was a massive change in his personality. He became shy, almost developed a fear of heights, started vomiting when at the childcare centre, lost weight, distanced himself from others and began acting out the event, including pushing his younger sister off the lounge.

“It’s like we had a different child,” his mother said.

The boy is now recovering. He was proud of the front flips he could do on his trampoline and was thriving in preschool, but still makes comments to his mother like: “Remember the day Jason hurt me and he went to jail?”

However, despite Francis’s actions, the mother said she forgave him.

“We are all human and make mistakes; we just need to learn to live with them,” she said.

Francis’s Legal Aid lawyer Mr McLaughlin described his client’s assault on the boy as “a momentary, albeit significant, lapse in judgement”.

He said Francis started working in childcare and early childhood education in 2009 but had lost his job and now lived on welfare payments.

He spent 10 weeks in custody after he was arrested, which was taken into account when he was sentenced for matters in the Supreme Court.

Francis pleaded guilty to assault. The boy had been left with scratches to his chin and face as well as sand-filled grazes to his nose, lip and chin.

Magistrate Campbell said they appeared to be minor injuries.

“But for a child carer, it was perhaps an extraordinary loss of control,” she said.

“It involved an egregious breach of trust by Mr Francis.

“The main role of a person who acts as a childcarer is to ensure the children in their care is safe.”

She said the psychological impact on the boy was much more significant than the physical injuries.

Francis was sentenced to a 12-month good behaviour order and 148 hours of community service.