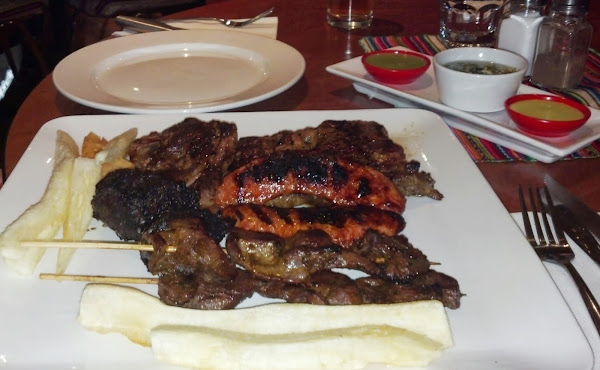 I’ve been eyeing up Cholo’s on Dickson’s Challis Street since the little Sichuan Restaurant gave up the ghost.

They’ve got some extravagant signage filling up their windows with an Andean vista and their website plays pan pipes.

There’s something lovely about the way their signage gives the impression “PERUVIAN CUISINE IS FINALLY HERE!!! WHAT YOU’VE ALL BEEN WAITING FOR” when in fact a need for Peruvian cuisine had never previously crossed my mind.

If not for Paddington Bear and the occasional busker playing pan pipes thoughts of Peru might have been absent from my mind altogether.

Inside it’s a bit of a let down. The tables look much like they were left behind by the previous Chinese restaurant.

There’s a bit of Peruvian bric a brac lying around but the ceiling looks like it belongs in a pretty dreary office.

The staff it must be said were wearing waistcoats made out of some hemp like material that one imagines a pan pipe player’s poncho might have been made.

On the staff. Friendly. Very friendly. Not entirely helpful though and occasionally half arsed.

… Ten minutes after ordering two Pisco Sours from a waitress…

Johnboy: Why yes, I have.

Waiter: Would you like me to make them now?

Johnboy: That would be great!

Making them when I ordered them would have been greater still…

But yes, you can get a Pisco Sour and that is a fine drink.

We ordered the Parrillada Platter for Two as a platter seemed like a good way to dive into an unfamiliar cuisine.

I did ask the waitress if we’d need any side dishes as you’d sort of expect something salady with a platter.

Assured it had all that could be desired we pressed on without side dishes.

And then our big plate of meat and chips arrived!

OK, they’re not chips, they’re deep fried yucas, which is another word for Cassava. When piping hot I recommend them. A lot like potato but a more interesting texture and some subtlety of flavour.

The big plate of meat did come with some sauces. There was a spicy green sauce, a spicy mustard sauce, and a spicy salsa.

They were all pretty good.

I’ll confess I don’t actually have a problem with a big plate of meat ordered in good conscience and I don’t think goosepig does either so not a problem for us but others should have their eyes open.

It was tasty, all importantly novel, and when we could eat no more the staff offered to box it up for us and it has made a fine breakfast this morning let me tell you.

It works out a bit cheaper than Copa around the corner, but without the showmanship.

On the other hand it has Pisco Sours.

Definitely worth a try.

Must go there if only for the Pisco Sour!

Another place to try out for culinary experience, which is in short supply in Canberra may I say.

If my memory serves me correctly… (which it doesn’t, f**kn old age) there was a Peruvian place in Jamison Square, in Maquarie, which has now turned into Subway?

I hope this doesn’t turn into ghost before long.

As for the ghost of the Shichuan restaurant in Dickson, their chili rabbit was fantastic (it may have been 10 years ago).
I do sometimes dream of it in my sleep… Rabbit ghosts perhaps.

I hope that you off-set this meal of meat later with something that originally came from nearer the ground than a pig or cows belly.

Any cuy on the menu?

Looks like someone made a guinea pig of himself.

Any cuy on the menu?

“It works out a bit cheaper than Copa around the corner, but without the squits.”

Fixed it for you.

Karin Foxwell - 11 hours ago
Frank Valzano hear hear! As an Art Therapist working with veterans with PTSD I can only imagine how that sort of money could... View
David Stephens - 14 hours ago
But if your head is in the sand you might come a nasty gutser. Moving on has its drawbacks. View
Smackbang - 17 hours ago
What a coincidence - your opinion is also irrelevant, and yet here you are offering it. View
News 7

@The_RiotACT @The_RiotACT
One of Queanbeyan’s oldest ever residents, Linda Moore, died peacefully last weekend at the age of 105 https://t.co/TULostP4NV (4 hours ago)

@The_RiotACT @The_RiotACT
While parents across Australia breathed a sigh of relief when children went back to school after weeks of learning from home, education departments had to ensure schools were COVID-safe. And it wasn't cheap https://t.co/vpuD1LJfd5 (6 hours ago)