Andrew Leigh has tweeted that the Chamber of Commerce’s long serving supremo has passed away after a lengthy illness.

The Chamber of Commerce has made this statement to its members:

The Staff and Board of The ACT & Region Chamber of Commerce & Industry are sad to announce that long-time Chief Executive, Dr Christopher Peters AM IO JP has passed away.

Chris suffered a setback to his existing condition which resulted in complications from which he was not able to recover.

Chris will be missed for his quick wit and smile, his generosity of spirit, his innate diplomacy and negotiating skills as well as his unerring perception and understanding of the nature of business and its often complex relationship with Government in the ACT.

Chris’s family have requested privacy in their time of grief and have also requested that donations be made in his memory to pancreatic cancer research in lieu of flowers. The Staff and the Board of The Chamber would like to extend to them our heartfelt condolences. It is anticipated that a memorial service will be organised in due course.

Donations can be made to the Australasian Gastrointestinal Trials Group, through their fundraising arm called the GI Cancers Institute. http://gicancer.org.au/. 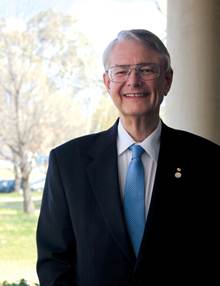 Vale Mr Peters. I met him twice and he was a genuine fellow

Very sad. He was a man of many achievements and will be remembered as a great Canberran. I am told he was still at work yesterday, tireless and driven as he was.

He passed away on Saturday. The service was yesterday.

Chris Peters was a great supporter and advisor, and an all-round nice guy and gentleman. Very sad news.

Very sad. He was a man of many achievements and will be remembered as a great Canberran. I am told he was still at work yesterday, tireless and driven as he was.

This is a shock. I guess we all noticed his incredible weight loss a few years back, I just figured he’d had gastric band surgery, but it sounds like something a lot more dire was up. He contributed a huge amount of work and achievements, and he’ll be missed by the ACT business community.

It has been an ongoing battle. He had had a significant block of time off last year but came back to work. I thought he was in remission.

This is a shock. I guess we all noticed his incredible weight loss a few years back, I just figured he’d had gastric band surgery, but it sounds like something a lot more dire was up. He contributed a huge amount of work and achievements, and he’ll be missed by the ACT business community.

Max Heffernan - 2 minutes ago
Wonder if it’ll work Matt Edstein Josh Taylor 🤯 View
Shaun Cummins - 1 hour ago
And which body is going to be the first experiment? A Frankenstein Monster. View
Despina Despina - 3 hours ago
What a waste of money. Give it to me instead!!!... View
Food & Wine 113

Rowan Hartcher - 5 hours ago
Alan Hopkins like wise View
Peter Quinn - 6 hours ago
So when can we celebrate colonisation????. Whatever day is nominated it will always be contested View
Alan Hopkins - 6 hours ago
its not that hard to change the day. just do it... View
Opinion 24

Bradley Heanes - 8 hours ago
Didn't the defence department already appologise for this? (Even though they were assisting the RFS at the time) Didn't they... View
franky22 - 11 hours ago
Why can't the ADF simply state that they made a mistake. View
News 21

Magpie Allan - 13 hours ago
Undoubtedly the two icons are among two of the greatest men you’ll could ever meet.... View
Breaking 5

Tramcar Trev - 14 hours ago
Simple do what other regions do, use local volunteers to staff the visitor centre. View
show more show less
*Results are based on activity within last 7 days

It's the week before the national holiday that causes division across the country, so it wouldn't be right for me...
Community 10

@The_RiotACT @The_RiotACT
This week’s newsletter covers everything from a sumptuous Lebanese breakfast spread to algae in Canberra’s waterways to lively discussion around Australia Day https://t.co/hyR7zinwv6 (2 hours ago)