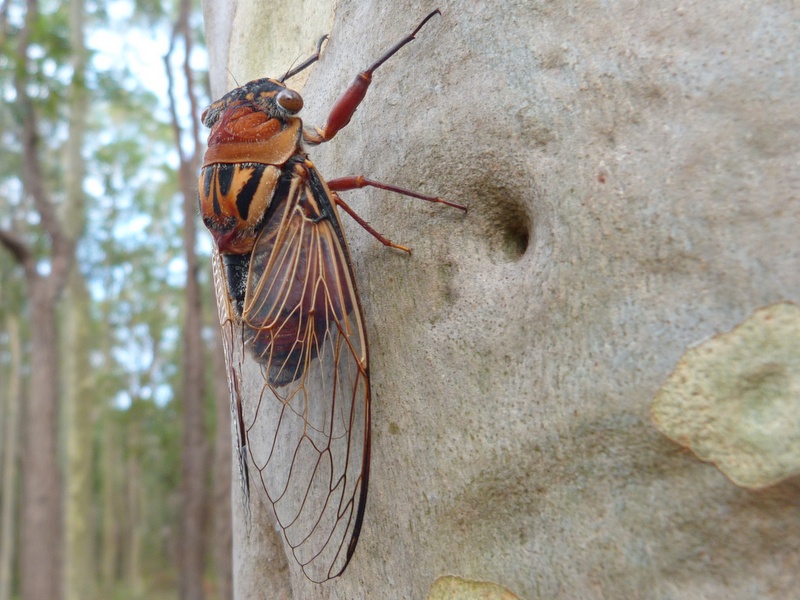 The double drummer cicada will test the eardrums of Canberrans holidaying at the coast this summer. Photo: Ian Fraser.

One of the things I’ve missed during the past three Canberra summers is the very soundtrack of a traditional Australian summer: the cicadas.

They don’t emerge en masse every year, but there are usually some. However, parched baked soil means the vast hordes of cicadas, which spend most of their lives as underground nymphs sucking sap from eucalypt roots, are trapped there.

When the rains finally come, as of course they have this year, the nymphs climb up to the light and up a tree trunk – or grass stem or fence or car tyre – and at night the adult cicada emerges from its shell.

Though the adult cicada lives for less than four weeks after the years of its life underground, this is when we know them. And we know them for their song, which can dominate the days when the temperature rises above about 20 degrees Celsius. 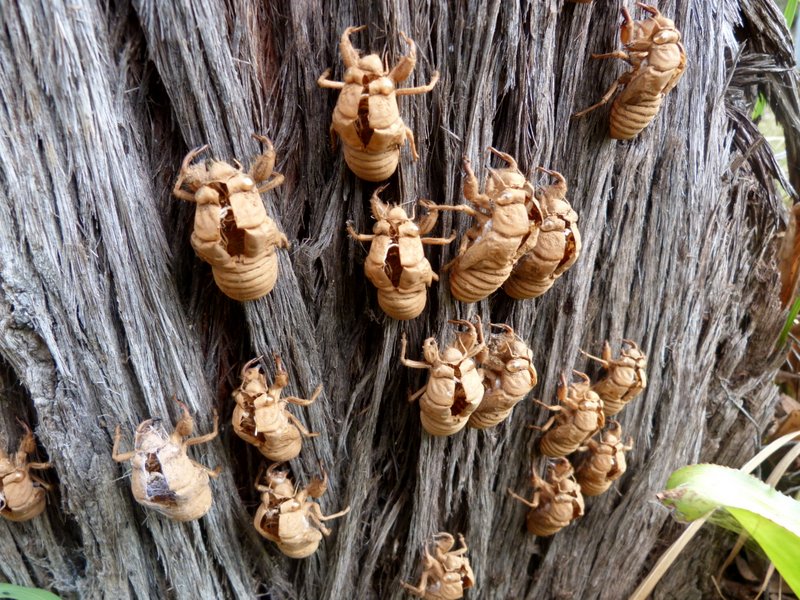 The empty shells of the nymphs, which have emerged from the splits along the back as adult cicadas. Photo: Ian Fraser.

A male cicada’s body is designed to sing. Corrugated membranes form a vibrating wobbleboard on his sides just in front of the abdomen, and the abdomen acts as a fearsome resonating chamber. His song is unique to his species. The energy required to drive it at up to 100 vibrations a second is significant, which is why he can only sing when temperatures rise.

Whether we thrill to the roaring song, or wince (or even both), it is not there for our benefit or annoyance. It is directed to the females of the singer’s species, who judge him by the force and persistence of his performance.

If she is sufficiently impressed, she will seek him out and they will mate. She will lay the eggs in a dead branch, where they will hatch in autumn. The tiny nymphs scurry down the trunk and into the ground to attach to the tree roots for the next few years.

In the meantime, however, something else is not interrupted by either singing or mating: the essential business of feeding, which is a constant activity. Cicadas are true bugs, which means they have a long proboscis which is inserted into the bark of the tree trunk or branch.

Through it they inject saliva and extract partly digested sap. This is a very dilute food source so to get enough of the nutrient they must take in large quantities of water – far more than they can absorb. Accordingly, the massed choirs are constantly spraying liquid waste onto the ground or anyone standing below. No yuk factor is really involved as it is essentially pure water. 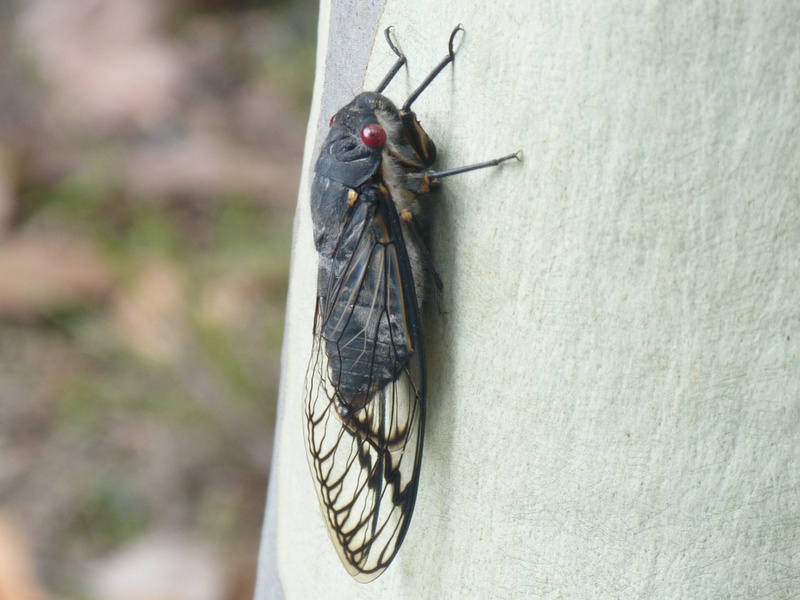 Redeye cicadas are providing Canberra’s soundtrack this summer wherever there are eucalypts. Photo: Ian Fraser.

The commonest Canberra cicada, and the one that is dominating this year, is the redeye cicada, a striking coal-black insect with glowing red eyes.

I live with fairly severe tinnitus so sometimes I’m unsure if the insects I hear are in the trees or in my head, but the redeyes leave no room for doubt! Their choir starts with a general bellowing, which then launches into what’s quaintly known by cicada aficionados as ‘yodelling’ – it sounds like a sawing, but melodious, ‘chee-aw-chee-aw-chee-aw’ sound.

Redeye cicada numbers are vast. They are scattered over the trunks and branches, and the air is full of their heavy bodies flying from tree to tree. The empty nymph shells are everywhere, and birds gather to feast. In a cicada summer, little ravens come down from their bogong moth feasts in the high mountains to gorge on the singers. Currawongs and magpies join them, as do many other insect eaters.

I’ve seen a dusky woodswallow battle with a cicada as big as her head.

There are other less conspicuous cicada species around Canberra, but it is the redeyes that most of us will hear and see.

However, for Canberrans going to the coast or the mountains during summer – and hopefully most of us will get the chance at some stage – there are many other cicadas to revel in or cower from, according to your taste.

Don’t judge them too harshly though – unlike us, they only have four short weeks to eat, drink, romance and generally make merry. And for me at least, a cicada summer is a good summer.

Ian Fraser is a Canberra naturalist, conservationist and author. He has written on all aspects of natural history, advised the ACT Government on biodiversity, and published multiple guides on the region’s flora and fauna.

Not where I live, despite the trees. In Curtin they were incredibly loud!

Nope no in Gordon

I am sure there are millions of them at the Botanic Gardens, some were very large.

Cicadas make the drumming sound en-mass as a protective measure when predators are close by. Its like fish swimming in schools

Jamie Angela our large noisy friends from up north, must have just been a particularly busy couple weeks for them 😄 I think here in CBR we have it easy!

Sue Bink - 6 hours ago
great news 👏👏👏 View
NiCe_tRy I_WoNT_LiE - 7 hours ago
Anyone who knows bruiser could've told you he would pass the test. Good on ya bruiser !!! View
Chris Pye - 7 hours ago
Yes!!!! There is still some good in the world! Absolutely wrapped for Pauly and Bruiser 👊 View
News 10

Gabriel Spacca - 7 hours ago
Echidna Sex Train is definitely going to be the name of my band. View
What's On 1

Jorge Gatica - 9 hours ago
Ingrid Decak they should have started much earlier View
planet42 - 10 hours ago
Don't know why the trees have to be 'removed'. Can't they just cut them down and leave them there on the forest floor to brea... View
News 16

Janette Hugs - 10 hours ago
I’m on DSP and recently moved to Canberra. I’ve only once driven through Civic in December. Since then due to circumstanc... View
countach - 11 hours ago
I think it's unfair that you can be a 15+ over the limit, super speeder hooligan for doing what was legal a month ago. Either... View
News 8

chewy14 - 10 hours ago
The 50% number used is also based on the eligible population (over 16s) so it's going to take a bit longer than a few weeks. View
show more show less
*Results are based on activity within last 7 days

The speed cameras along Northbourne enforcing the recently amended speed limit have been described as having a "perverse outcome" after...
Food & Wine 68

@The_RiotACT @The_RiotACT
Get the party started with loads of local bands in this week's gig guide! Check with venues for cancellations before you go https://t.co/1X9jVWcsmv (7 hours ago)

@The_RiotACT @The_RiotACT
A Reckoning in Boston highlights the wicked problems of homelessness which will be eerily familiar to Canberra audiences. This challenging documentary screens this Friday at the @NFSAonline https://t.co/jsMIKCuO2B (8 hours ago)

@The_RiotACT @The_RiotACT
Looking for an unforgettable experience? Flame is a secret pop-up dining adventure that promises to turn up the heat as guests are treated to dinner and a flaming good show https://t.co/aFbs53O3Ih (10 hours ago)