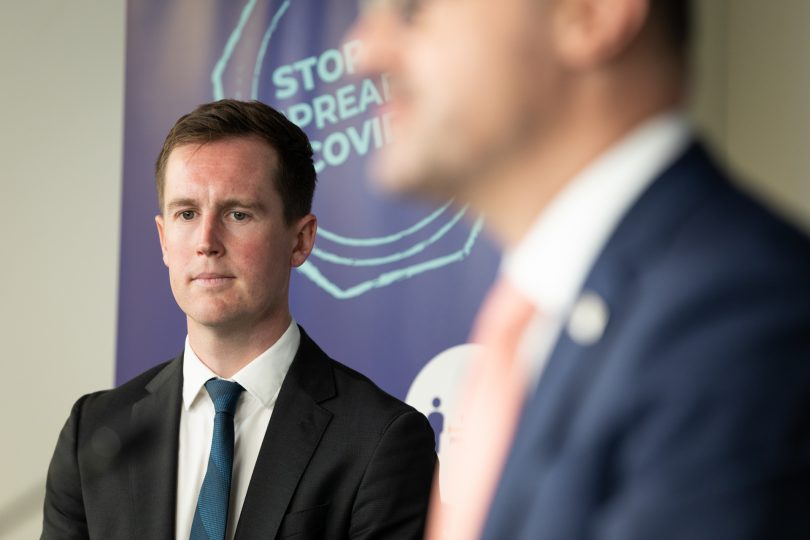 Minister for Skills Chris Steel has come under renewed pressure from the Opposition over more than $8 million in CIT contracts awarded to a single consultant. Photo: Michelle Kroll.

The ACT Government will have “more to say” later this week after it received its ‘please explain’ response from the Canberra Insitute of Technology over millions of dollars in contracts awarded to a single consultant late yesterday (14 June).

The ACT Government confirmed it has received an explanation from the institute but those documents have yet to be made public.

More information is expected later in the week.

It was then revealed that not only did Minister for Skills Chris Steel question previous arrangements between Mr Hollingworth and the institute in March last year, but Chief Minister Andrew Barr’s office had also been warned about them as early as 2019.

Mr Steel said last week he would be prepared to take further action against CIT if it was discovered that proper procurement processes had not been followed.

But CIT has defended its actions and chief executive Leanne Cover told ABC Radio she was confident the contracts represented “value for money”.

READ ALSO Steel needs to get to the bottom of opaque, incomprehensible CIT contract

In the last five years, CIT has awarded contracts worth $8.87 million to Mr Hollingworth’s companies. The last of these, awarded in March this year, came in just $10 short of the threshold at which it would have been required to go before the government’s procurement board.

That contract said CIT sought to “further progress the evolution of its complex adaptive systems informed approach to CIT’s transformation, from its initial exploration, designing and testing phases” and it would do this by “establish[ing] and self–sustain practices that allow for iterative learning cycles across a range of temporal (weeks, months, years and decades) and spatial (individuals, teams, departments, colleges/divisions) scales”.

Labor and the Greens have since urged the ACT’s auditor-general to look into the contracts and Mr Steel wrote to the CIT board chair Craig Sloan seeking a jargon-free explanation for the latest contract.

Aside from a vague comprehension that the contracts were awarded to provide mentoring advice to Ms Cover, Mr Steel wasn’t able to provide more detail on where the almost $5 million had gone.

His letter, therefore, asked for justification for why “such a large quantum of funding [had] been used for change management services of this nature”.

Minister for Skills Chris Steel has come under renewed pressure from the Opposition over more than $8 million in CIT contracts awarded to a single consultant. Photo: Michelle Kroll.

Opposition Leader Elizabeth Lee, who last week moved a no-confidence motion in Mr Steel, has again put pressure on Mr Steel and Mr Barr to “tell the public everything they know about the CIT consulting contracts”.

She described the response from the Chief Minister and Minister for Skills as having been “grossly inadequate” so far.

“It is now a week since this issue came to light and we are yet to hear anything of substance from the ACT Labor-Greens government,” Ms Lee said.

“Canberrans are rightly shocked and outraged at this gross misuse of taxpayer money and the Chief Minister must step up and show some leadership.”

Ms Lee last week said the “dodgy” contracts were once again proof of the “culture of secrecy” being fostered by Mr Barr’s government.

Earlier this year, she called for an independent audit of all procurement decisions made by the ACT Government over the past five years.

Mr Steel last week said the government was not defending the contracts and he did want answers, confirming he’d only become aware of the contract on Monday.

But he argued that the correct processes had been followed in terms of not informing his office. He also noted the CIT board operates under a governing board and executive that is external to government, therefore, he did not have oversight of the day-to-day delivery of CIT operations.

Mr Hollingworth’s company Think Garden has been contacted for comment and CIT has been asked for a copy of the advice it has sent in response to Mr Steel’s letter.

Is there any truth to the rumour that both Leanne Cover and the incomprehensible management speak ‘con’-sulting firm have had their contracts paid out in their entirety? If so, it is a deeply disappointing outcome. ACT taxpayers should rightly expect CIT’s new board/management and the ACT Government to have the stones to acknowledge this remarkable waste of public monies and call those responsible to account. Apparently not.

Surprised that CIT did not engage the consultants to write the ‘explanation’ report. Maybe that was too complex and abstract a thought process for the CIT Board. Given that the contract said “CIT sought to “further progress the evolution of its complex adaptive systems informed approach to CIT’s transformation, from its initial exploration, designing and testing phases” and it would do this by “establish[ing] and self–sustain practices that allow for iterative learning cycles across a range of temporal (weeks, months, years and decades) and spatial (individuals, teams, departments, colleges/divisions) scales”. Indecipherable BS I would say.
Good to hear that chief executive Leanne Cover was confident the contracts represented “value for money”, only one problem, it is not her money. I am sure the CIT students could have benefited from the $8.5 million dollar contracts.

I’d be asking what are the concrete/substantive changes to the CIT that have resulted from all this consulting work, and do the benefits exceed the $8m or so that has been spent? (and show me how).