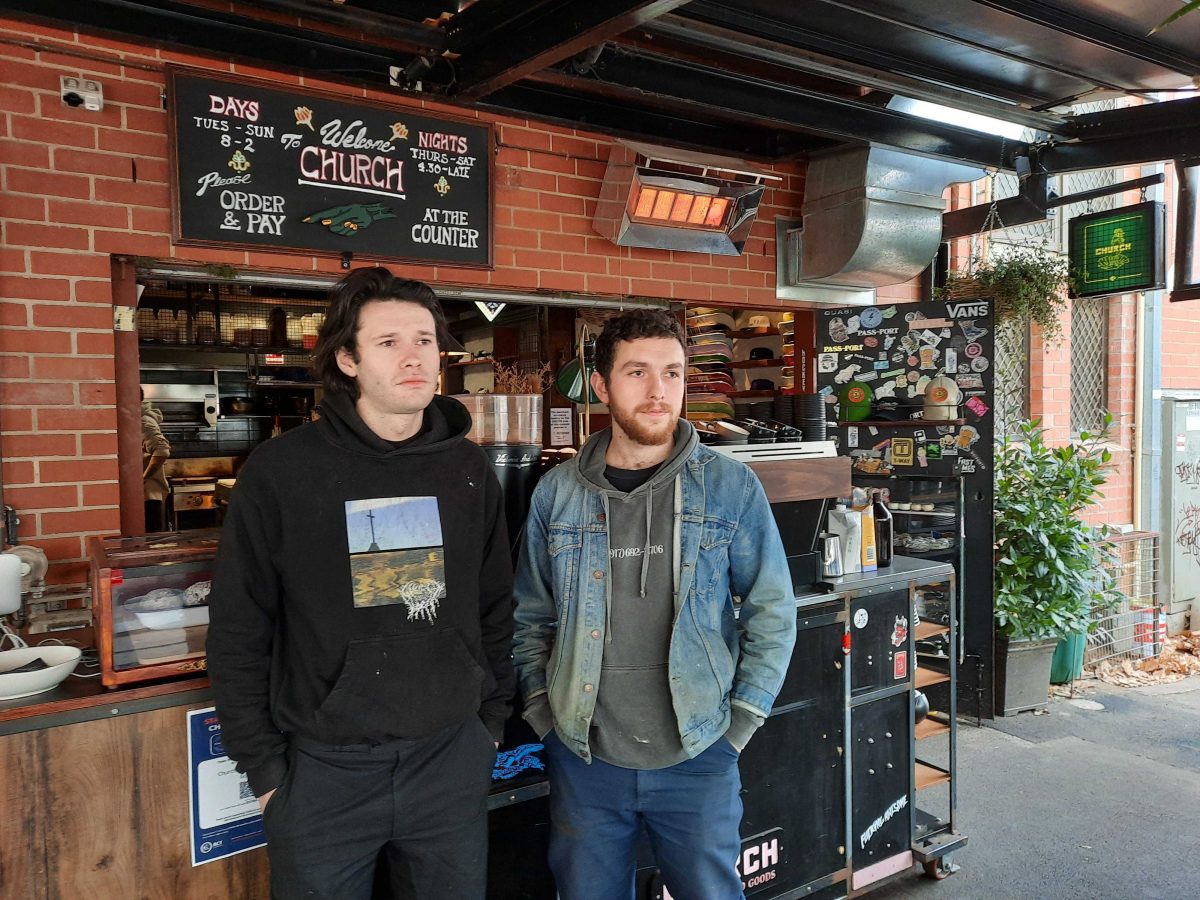 The city laneways project, designed to inject new life into neglected spaces, will be the death of a four-year-old business this Saturday.

The irony is not lost on 27-year-old young entrepreneurs Brock Dunn and Nicholas Mico, who have ridden the highs and lows of the past few years to make a success of the Church Neighbourhood Goods cafe and shop in Odgers Lane.

“We made it through COVID, made it through this, that and another with community support and we’re still here but it’s been the government that takes us out,” Brock said.

On Saturday, the roller door will come down on the business as the City Renewal Authority proceeds with its plans to give the laneway a makeover, which doesn’t include the Church cafe.

The pair from Canberra’s skateboard community embraced the laneway milieu as the perfect fit for their business, which also sells records, clothing and skateboards.

They leased the small hole-in-the-wall venue with its covered outdoor seating area, and the community voted with their feet to support the business, even through the dark days of the pandemic.

But last October the City Renewal Authority unveiled plans for Odgers Lane in the Melbourne Building and Verity Lane in the Sydney Building to rejuvenate the spaces to attract new businesses, including outdoor dining.

Unfortunately, the plans did not include the Church cafe’s outdoor section, which provides 90 per cent of its seating.

It was slated to become a raised island. A revised design would still mean the business losing half of its seating area, which would not be viable.

The real sticking point, however, is the excavation needed to replace ageing stormwater pipes. The CRA said this essential work would require the temporary removal of the Church’s outdoor dining area, which could be reinstated at the completion of the works.

But Brock and Nicholas said without any guarantees about how long this would take they could not afford to simply close the business and hope to re-establish it at some point in the future.

READ ALSO What the ACT Auditor-General has in his sights

With their lease expiring this month and the outdoor dining permit on 31 July, they believe they have no choice but to close.

“It made it incredibly hard to renegotiate the lease with the landlord and move forward not knowing what the alleyway is going to look like or to get any plan as to how the works are going to happen,” Brock said.

Brock said the CRA did not consult the business before it released its plans, and negotiations since have been fruitless. 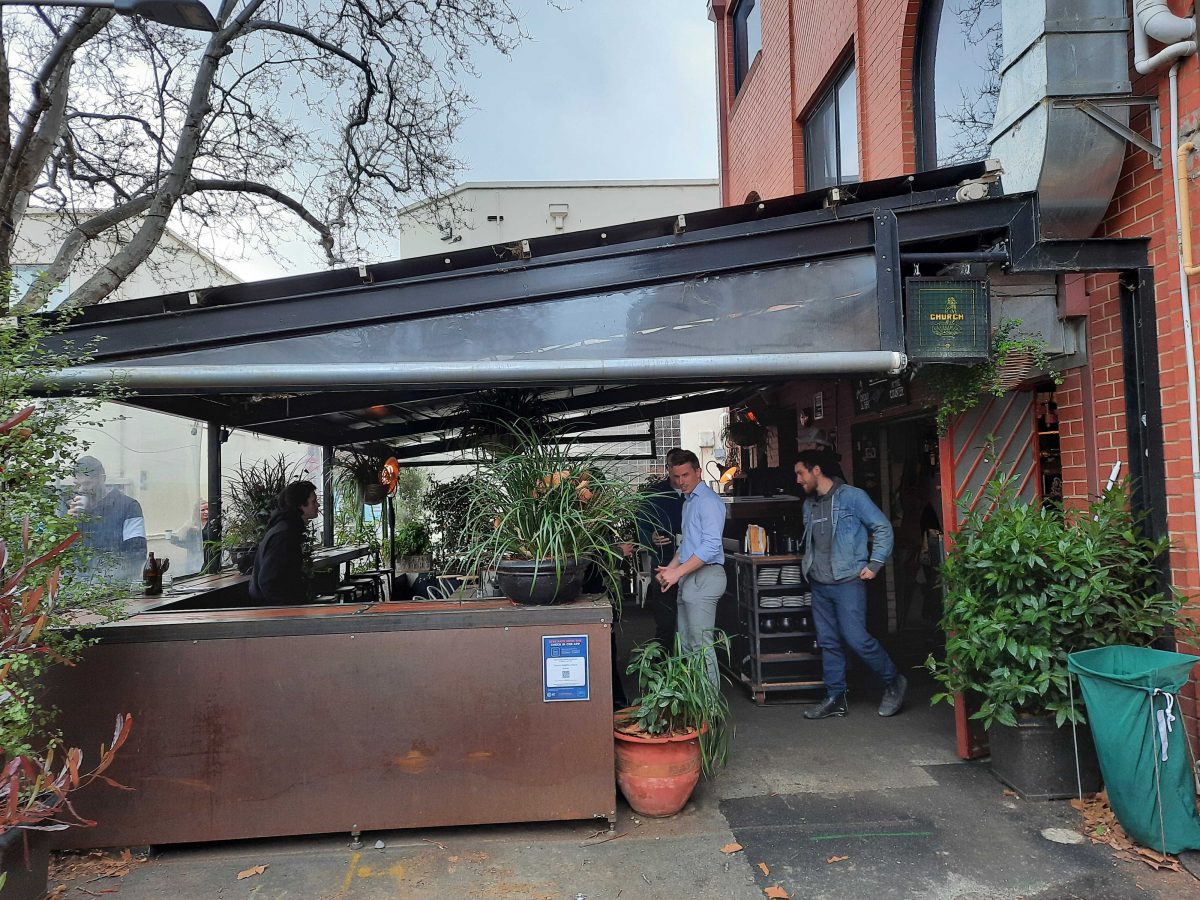 Closing: The Church Neighbourhood Goods cafe in Odgers Lane in the city.

Brock said that the prospect of the CRA helping to relocate the business was taken off the table when the pair, seeing no other options, actually decided to explore what that might mean.

Instead, the CRA only offered to dismantle the outdoor seating structure for free, telling them that normally the business would have to pay

The partners feel the CRA has not taken them seriously, especially compared to the way businesses’ outdoor areas in Verity Lane or parking spaces in Odgers Lane have been taken into account in the project plans.

It’s a bitter pill for them to swallow after not just making a go of the business but walking the talk about bringing people into the city and its laneways by staging events over the years, such as the welcome for the Belco Bowl Jam skateboard event that drew 500 people into Odgers Lane.

“The government was even bold enough to contact us on the 8th of March this year, trying to write an article about our business for their online channels regarding our ‘outdoor activation events’, even after they knew their actions were forcing us to close down,” Nicholas said.

Brock said the pair had never received government support in the last four years of being here.

“It’s just something we’ve done,” he said. “We wanted to do what the government’s now planning on trying to do.

“I was 22 when we signed the lease and young and keen to leave our mark on the city, leave an impact. We wanted to create something that wasn’t necessarily being offered anywhere else.

“That’s why the alleyways immediately spoke to us as an option because you can’t find that anywhere else in Canberra.” 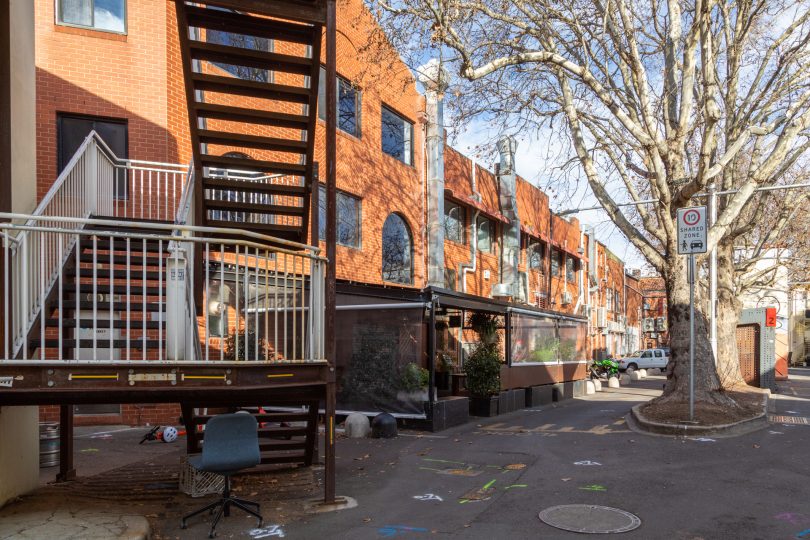 Odgers Lane in Civic. Work is to begin in August. Photo: Michelle Kroll.

But they fear their business may not fit into the CRA’s vision for the laneways, which was implied to them during talks with the communication company hired to manage the project.

“We took that to mean the grittier side of Canberra that we wanted to take on and create a culture out of, something that Melbourne thrives upon, and something the CRA is blatantly trying to mimic, but they just want a polished version of that,” Brock said.

“What we do is not a look that they’re necessarily after.”

The pair supports the premise behind the laneway projects but don’t believe a viable business that has done more than most to renew Odgers Lane should be sacrificed.

They still hope that the CRA could provide some compensation to the business or assist with finding a new venue; otherwise, they will have to start from scratch.

The major works, including stormwater, drainage infrastructure and laneway surface refurbishment, were supposed to start in April but have now been pushed back until August.

City Renewal Authority CEO Malcolm Snow said it was disappointing that Church Neighbourhood Goods had decided to close their business despite efforts to inform, engage and limit the impact on their outdoor business trading as a result of the upgrades within Odgers Lane.

“Church has made a wonderful contribution to public space activity in Odgers Lane and, along with businesses such as Verity Lane Market and Reload, have set an excellent precedent for laneway activation which we hope to see continue,” Mr Snow said.

“The Authority investigated alternative temporary locations for Church’s outdoor dining space during construction but unfortunately could not find a solution satisfactory to the business,” Mr Snow said.

“The Authority also offered Church the first option to re-establish their outdoor dining area in the same location after the works, noting that it would be a smaller space but expandable when the lane is closed to vehicles.”

All construction works in the laneways was anticipated to be finished by late 2022.

Very sad to see small businesses targeted by this government in Canberra. They simply hate the concept of people getting out and being entrepreneurial.

Damn, hopefully these fellas can find another spot

Such a shame Sometimes govt does not understand that grunge and a bit of disorganization/ grittiness is what you want in the lane ways. Not some sterile or fancy schmancy makeover.

Very sad, Nic ans Brock did a great job with this cafe! Hopefully a last minute solution can be found.

This sucks for these great guys. Stuck a great cafe. Hope they find a way to continue. Seems like an absurd outcome to revitalise but not work and retain the one main business…

Yet food hawkers are getting handouts?!

Move into a van..

I hear ya and totally get ya. Been there. Fingers crossed

So sad that these entepreneurial fellas have been treated this way. Good luck for the future.

The business states they have received no government support, but their trading relies on the use of public land (under permit, yes, but no doubt not at a full market rental rate). I feel for them, but not to the extent that I’d oppose necessary upgrades of infrastructure and public land just to keep one business operating.

There is a difference between organically grown and shake’n’bake, and I think this place had all the makings of ‘Melbourne laneway culture’. However that culture has generally thrived on low rent spaces which are just left alone, not high property income generating commercial precincts. The same fate befell the unique and (personally) lamented Electric Shadows Bookshop, which survived one fairly sterile re-development only to fall to a second, and Cornucopia, which could not survive the slick reworking of Braddon despite being iconic. Its a shame that this business falls to Canberra not having even one alley that does not feel the urge for a makeover, albeit in the very heart of the city. I think Canberra was more interesting when it was cheaper, and to a certain extent money destroys what everyone is paying the big bucks to be near.

Best coffee in Canberra. Light years ahead of second best

While I get the aspirations of the laneway project, competent project management would seek to take existing businesses with them on the transition – at least consulting them closely on the proposal, and ideally by supporting them to stay during and after the transition. Especially an establishment like Church which has been making a big contribution to revitalisation as an individual business. It’s sad and ironic that what appears to be a shortcoming in project management is actually causing the opposite result to what they are saying they want to achieve. 🤦

Christina Raymond ACT government for you.

Benny Turnbull anyone remember brod burger almost suffered the same fate and the government made it right because of a petition… Where’s the pen?

So sad. They are such a good crew!

Waffle hash browns are to die for. Definitely going to miss them.

Such a shame. I have a feeling the area is going to be very sterile and boring after this is all said and done. Odgers Lane was already activated and thriving thanks to this cafe and the community events around it. Pushing Church cafe out is at odds with City Renewal Authority’s own vision statement.

Greg Garth uninformed and a tad bitter comment. Lean a little more to the left and the chip may dislodge 🙏

Rustus Ellis Not uniformed, depends who you talk too.

Greg Garth I have relevant and very similar history with ACT gov and landlords. Consultation, direct and relevant, has always been lacking with small business. They could do way more to assist but have no hope with the article mentioned personnel. Small business makes it difficult to take on risks that have no guarantee. 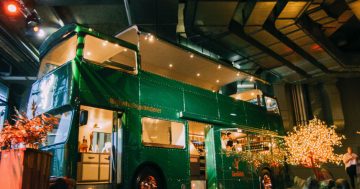