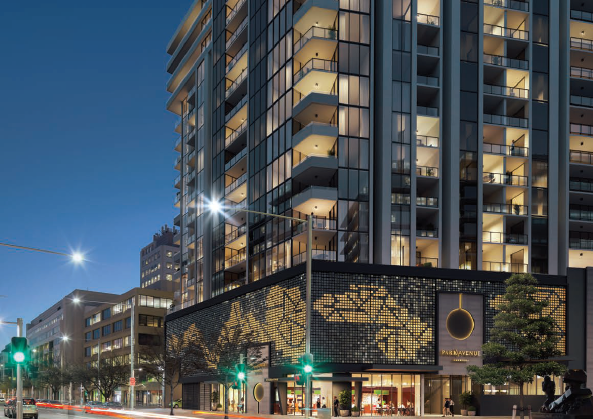 The launch of Morris Property Group (MPG)’s $110 million Park Avenue project last week adds to the pipeline of residential and mixed-use development that is transforming the eastern side of the city.

Due to be completed in 2020, the development will also include a gymnasium, landscaped gardens, 500 sqm of retail space and six levels of parking – three below ground and three above ground.

Park Avenue will join four other MPG projects under construction including the nearby Highgate in City Walk, as well as other developments on that side of the city such as Geocon’s plans for the re-development of the former public housing site opposite the Canberra Centre.

MPG Managing director Barry Morgan said after the rejuvenation of Civic West it was now the turn of the other side of town, with plans by the University of New South Wales to develop a campus on Parkes Way only five minutes away from Park Avenue ­– a massive boost for the CBD.

He said there was a strong demand in Canberra for an inner-city lifestyle where people could be only minutes away from work and play.

“We think there is a strong belief in the Canberra market at the moment from investors. Suburbia continues to spawl, commuting is becoming a really big issue and many people are now choosing an inner-city lifestyle,” Mr Morgan said.

“We’ve concentrated on the city area for exactly that reason – the amenities, employment that the city provides, etc. It makes sense.”

The investment happening in the city was transformational with more services, more demand for infrastructure, and more confidence for service providers and businesses to move into the area.

“By the time we finish Highgate and Park Avenue there will be 370 apartments equalling 500 to 600 residents, which will reinvigorate that City Walk area,” Mr Morgan said.

Mr Morgan said location was key, with Park Avenue not only having proximity to employment, shopping, restaurants, and entertainment, but unrivalled views of iconic Canberra sights.

Demand had already been strong for the apartments, which will include stone and timber joinery, double glazed windows and stone benchtops. The three-bedroom penthouses boast a $50,000 kitchen package including Sub-Zero and Wolf appliances.

$40.6 million worth ­– or 79 of 184 lots ­– have sold already, with a good cross-section of mainly local owner-occupiers and investors, with some interest from Sydney because of Canberra’s better rental returns.

Mr Morgan doesn’t expect to see that demand tail off, particularly in the city, despite the number of projects underway or planned.

“When you look at the pipeline, the delivery time, and the lengthy process, and you get that continued population growth, demand will continue,” he said.

Mr Morgan believes the UNSW plans, the first stage of the Light Rail Network, and the Canberra Casino redevelopment ­– which is expected to increase visitor numbers to 617,000 by 2030 ­– all feed into an economic boom for the national capital.

Demolition of the existing office block is due to start in the second quarter of 2018 and take most of the year. Construction will start after that and is due to be complete by the third quarter of 2020.

Ramon Montero - 31 minutes ago
I do remember him when started arbitrate football, indeed very polite and educated a young person. I had the privilege to mee... View
Kacey Butterworth - 12 hours ago
I feel extremely privileged to have had Ben as a mentor, teacher and year co-ordinator throughout my high school years. He ta... View
Annamaria Zuffo - 15 hours ago
Fantastic Ben. Lucky kids and us for knowing you. View
Public Sector 3

Ol L - 45 minutes ago
Why have Canberra based public servants when they can work from anywhere? Time for those jobs to go regional. View
Opinion 48

Ol L - 52 minutes ago
If it’s not a museum then why have so many artefacts on display? Surely a very somber and minimal display of artefacts woul... View
Kerry Apted - 12 hours ago
Tiger Fit it's irrelevant what you see it as unfortunately. They're not "trying to turn it into a museum", it's already a mus... View
Tiger Fit - 12 hours ago
Kerry Apted that's not how I see it View
Opinion 1

Ol L - 55 minutes ago
Odjers lane used to be no more than a late night toilet. Any improvement on that is good step View
Community 5

@The_RiotACT @The_RiotACT
Zapari wanted a standout building for Woden. The result is The Shard. Check out the penthouse views https://t.co/wfAtM4OT2m (32 minutes ago)