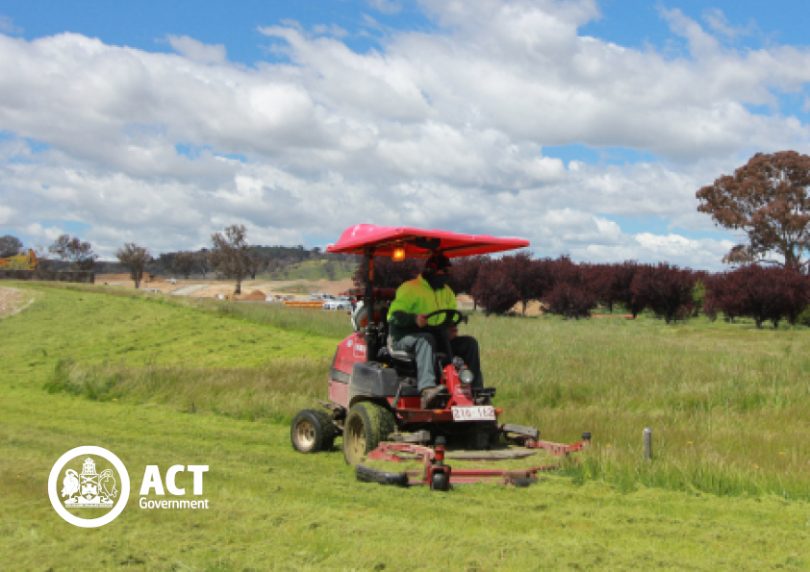 Traffic intersections will be the first priority for the city’s mowing crews. Photo: Supplied.

The city’s mowing crews are riding back into action with gusto amid concerns that Canberra’s public spaces have become overgrown – with potential safety problems for road users.

Traffic intersections will be the first priority for the Transport Canberra and City Services mowing crews who returned from the festive break this week to find the grass had grown rapidly while they were away.

The ACT Government is responsible for mowing approximately 4,697 hectares of irrigated and non-irrigated grass in urban open spaces, sportsgrounds and at the urban edge.

There is a base mowing fleet of 73 mowers which is supported throughout the mowing season by contract mowers.

Mr Brice said that after focusing on traffic intersections, the mowing crews will target parks and green spaces on shared paths.

“Of particular concern is the ongoing problem of African Lovegrass (ALG) which is the source of much of the long grass, particularly along main roads,” Mr Brice said.

“ALG can grow very rapidly after being cut, particularly in response to rain and may throw seed heads as tall as 600mm within two to three weeks giving affected parts of the city an untidy and unkempt appearance shortly after mowing.

“To help restrict the spread of ALG, strategies are being developed that include modified mowing practices and additional herbicide spraying, particularly adjacent to high-value conservation areas,” he said.

“TCCS will be expanding the current program in areas that adjoin native grasslands and nature reserves, and will implement a reduction and containment program along main roads to help restrict the spread to non-infested areas.

“We are hopeful that our expanded containment program will, over time, work to reduce the opportunity for this weed to threaten our high-value conservation areas and further extend into open space areas.”

Have you been concerned about any overgrown public spaces? Let us know in the comments below.

I’ll address here a common misconception – repeated below – about the self government referendum(s), taking off my bodybuilder cap and putting on my other cap as a Canberra historian.

There were not two referendums about self government for the ACT. There was only one – held on 25th November 1978. There were 3 options – Local government, state government and No Change. 68% of Canberrans voted for No Change.

There was another plebiscite of sorts about self government. It was conducted by 2CC in late 1976 and involved desks being set up at Monaro Mall, Civic and at Woden Plaza with people filling out ballot papers with a Yes/No option. This survey also returned a majority No vote.

When self government was finally introduced there was no referendum or plebiscite. The Hawke government introduced a bill to the Senate in mid 1988 which was voted down initially because of the voting system which involved mini electorates. The modified D’Hondt system was then put forward, the bill was approved by both the Senate and House of Representatives and self government became a reality in April 1989.

Sorry to disagree with you John but I distinctly remember 2 referendums both of which said NO to self government. They were several years apart from memory. Either way the Hawke government took no notice.

I was around before self government too and whilst I agree it was better I don’t think it was significantly so. I think with the passage of time people seem to distort their memories somewhat.

I also think many don’trealise that Canberra grew massively during the 70’s and 80’s so much of the town was all shiny and new. Which does have an impact on how things were perceived as things age.

I have seen a comment from Rose Deo of Forrest to the effect that the untidy state of Canberra’s municipal areas makes her wonder what she pays her rates for. In response, Ben Jones has referred to this as being “spoken like someone from Forrest also”. Not quite sure what Ben’s getting at here, but my reading of Rose’s comments is that, like many people around Canberra, she’s sick of seeing her living environment deteriorate despite paying record rates. Perhaps she’s also concerned that this can only get worse, given reports the ACT Budget is in serious trouble despite record revenues, notably from rates. Maybe she’s also noted yesterday’s reports that the ACT Government’s delays in selling off a number of public housing and other assets around the city has potentially put in jeopardy matching payments from the Commonwealth under the Asset Recycling Initiative, all intended to help pay for Light Rail. Conceivably, she’s seen today’s reports that Stage I of Light Rail risks becoming a White Elephant due to electrical installations along its 12 km that fail to meet required standards. All of this indicates one thing: that Canberrans can expect to pay even steeper rates and receive even less for them than what we’ve experienced to date. So Ben, if that’s what you mean by being spoken like a true Forrest resident, I applaud your response. If on the other hand, it’s intended as a cheap shot at someone simply because they live in Forrest, I’d suggest a rapid move away from Barr-inspired abuse.

Meanwhile, the arboretum is squeaky clean.

Weed and general suburban and street scape maintenance in Canberra is an embarrassment as the nation’s capital. Majura Parkway’s a weed farm, parts of Gungahlin town centre are in dire needs of a trim and spray. Palmerston parks are mowed regularly but there’s little to no follow-on trimming and spraying. This is the sort of ‘back to basic services’ the Barr Government has neglected.

Jared James - 38 minutes ago
If the Liberals ever got into power in Canberra they'd sell everything off, wreck everyone's lives and then blame Labor! View
Charlie McDonald - 2 hours ago
Bethany Williams Meanwhile the rates and land tax continue to skyrocket and consequently rents are skyrocketing as well View
Margaret Freemantle - 11 hours ago
Got to be kidding to vote Libs in Canberra!! View
News 2

Paul South - 40 minutes ago
This argument is bushes in front of the trees . Since when has a crown fire started due to a logging dump ? Bunch of bloody c... View
Fiona Dickson - 13 hours ago
Really the only answer is to stop logging. Removing debris is also damaging. View
News 13

Carole Ford - 53 minutes ago
Are we any nearer to agreeing on a location for a Southside crematorium / natural burial cemetery? The need is there, as our... View
Bella Twine - 11 hours ago
i should hope not its not humane ot legal to bury living people. View
Phil Andrews - 12 hours ago
Or anybody living outside the 10km radius Michael Ward 🤣 View
News 7

Jean Hardy - 53 minutes ago
Vicky, are you formally exx manger from pacific place appartments View
Margaret Wells - 8 hours ago
Any decisions about the scourge of AirBnB. View
Vicky Gregory - 11 hours ago
Why didn’t they look at the Qld model? Thousands of apartments on the Gold Coast , why be different? View
Opinion 22

Shayne Borger - 58 minutes ago
Canberrans have become a city of whingers and have nothing good to say. Being active and healthy and sport tourism brings $M... View
Damaris Wilson - 8 hours ago
The latest roundabout has just appeared on Masson Street in Turner. It's a nightmare there at peak hour, made even worse now... View
Geoff Williams - 9 hours ago
Triathlon Act feedback... View
News 128

Alan Sargeant - 9 hours ago
Ross MacPherson There are some government services that have tobe provided - health, schools, garbage collection and so on. I... View
News 1

James Forge - 11 hours ago
The pictures of these rocks all look like PhotoShop jobs but I know that they are not. View
News 14

UPDATED: The Bureau of Meteorology (BOM) has forecast possible large hail and severe thunderstorms across the ACT and southern region...
News 128

The ACT Government has announced an extra $4 million over the next four years to help reduce the Territory’s carbon...
News 66

Opposition leader Alistair Coe has asked Canberrans to have higher expectations ahead of this year’s election following the Government’s budget...
News 52

Six new fire and smoke detection cameras that can identify threats behind hills and in forests will be rolled out...
Opinion 22

As the ACT Government prepares for Stage 2 of light rail, fasten your seatbelts because it promises to be a...
Opinion 24

After 30 years as a journalist, I don't often bother getting angry with politicians. I know there are good people...
News 133

The ACT Government is set to spend $200,000 on a feasibility study to determine the best location to build a...

Interested in a job on the City Presentation team? Well, marketing is out and mowing is in

Canberra named Australia’s most liveable city thanks to safety, work and education

@The_RiotACT @The_RiotACT
A transparent, accountable and robust system is the best way to protect children and young people in the wake of the Child Protection Inquiry, argues Rebecca Vassarotti https://t.co/RwebQXBNdK (1 hour ago)

@The_RiotACT @The_RiotACT
From an all-local lineup bushfire benefit show to Abbey Road Live, here are the gigs worth catching in #Canberra this week https://t.co/ga0VbqGlcI (10 hours ago)

@The_RiotACT @The_RiotACT
A rock blasting company has turned the two boulders that blocked the Snowy Mountains Highway on Brown Mountain into rubble. Here's how they did it https://t.co/PBvLmAUWtR (11 hours ago)