Clarke & Di Pauli win a gong for their Arboretum work 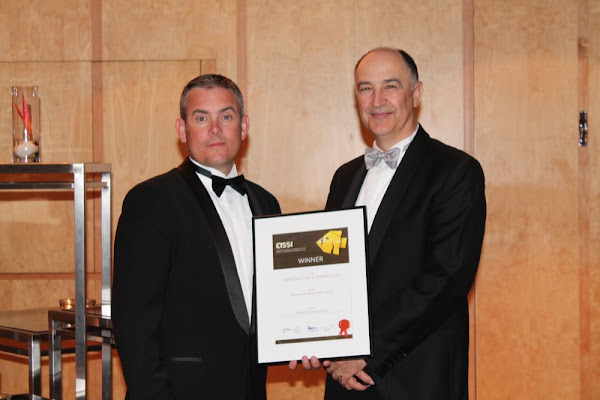 Queanbeyan surveyors Clarke & Di Pauli are letting it be known they’ve been recognised at the 2012 Excellence in Surveying and Spatial Information Awards.

Queanbeyan’s Clarke & Di Pauli Surveyors have been awarded the NSW Excellence in Infrastructure and Construction Award for their major role in the surveying of Canberra’s National Arboretum Visitor’s Centre.

Clarke & Di Pauli received the award from of a large pool of NSW surveying companies at Saturday night’s 2012 Excellence in Surveying and Spatial Information Awards.

They were awarded the prestigious commendation for their survey expertise during 2011-12, which enabled the construction of the complex 3-dimensional design of National Arboretum.

Co-Principal, Steve Beljanski, said receiving the award was a great honour for the small local company.

“Clarke & Di Pauli is honoured to be recognized by our industry with such a prestigious award. I am very proud of the whole team, led by Co-Principal Daniel Rowsell.” said Mr. Beljanski.

Bradley Shallies - 23 minutes ago
Belinda Spouncer I could nominate one government agency in Canberra that actively uses bullying and intimidation in preventin... View
Kurt Neist - 47 minutes ago
I wash dishes, order supplies and do deliveries. Can’t do any if it from home. At least the pay is rubbish...... View
Paula Simcocks - 1 hour ago
For older women who frequent public toilets when out, or those in restaurants etc , I want to see these areas much better mai... View
News 7

Julie Macklin - 23 minutes ago
I didn't know the conversation had been about "bullet trains". I thought it had been about faster trains. First time I have h... View
Julie Macklin - 25 minutes ago
Unless the bus is caught in thick Sydney traffic, as has happened to me, making a five hour trip. View
Paul Hannelly - 26 minutes ago
We just need better rail infrastructure and maintenance so the current trains can reach their full potential View
Community 136

Wob Bert - 29 minutes ago
It is happening because some people can't keep their cars running straight on a wide straight strip of road. Who is at fault... View
Damaris Wilson - 2 hours ago
Amanda East, John Harding, Jessica Hewson, Liz Wilson, Morris Reinbear ... View
Damaris Wilson - 2 hours ago
Public support to keep them seems to be overwhelming - can't we prevent this from happening? View
News 29

Mark Dando - 29 minutes ago
Mike Lawson thanks for implicitly mocking my neighbourhood, the Kingston Foreshore, again. Every time you & other self-appoin... View
duc nguyen - 1 hour ago
No one comes to Canberra and thinks the current West Basin is the place to be. Even though it is at the heart of the Nation's... View
Neil Chandler - 5 hours ago
I would have thought that whatever "heritage" the area had, both european and indigenous would have been pretty much devastat... View
Food & Wine 5

Rose Mary - 5 hours ago
David Blanchfield put it on the menu! View
News 3

Greg Garth - 9 hours ago
Gabriel Spacca Or a mixture of smoke and steam. View
Gabriel Spacca - 12 hours ago
If you pour water on fire it’s likely to cause more smoke not less. View
Sport 31

Nikos Manikas - 12 hours ago
Dianne Latimer if Brisbane get a 2nd team then all Ch9 will do is alternate between the 2 Brisbane teams. just like now they... View
Food & Wine 128

Emma Jelbart - 14 hours ago
Meagan Kopatz I'm in Fraser and heard something like about the time you would have heard that bang (or boom?) in Kaleen. Agre... View
Food & Wine 1

Lin Van Oevelen - 15 hours ago
That's excellent news! I rarely find the time to get to the markets and their fruit and veg is so much fresher than that from... View
show more show less
*Results are based on activity within last 7 days

Mystery surrounds a loud bang heard early this morning in Belconnen and Gungahlin but it's not the first to be...
Community 136

UPDATED May 23: Following yesterday's announcement of a major shake-up among Wesfarmers retail brands, Target has announced which stores will...
Best of Canberra 100

@The_RiotACT @The_RiotACT
A new report from the Grattan Institute has labelled an East Coast bullet train connecting Melbourne and Brisbane via Sydney and Canberra an "expensive folly" that's "not realistic for Australia" https://t.co/UOL10vuiHu (1 hour ago)

@The_RiotACT @The_RiotACT
Fluff your beanie, wax your skis & get familiar with the term aprés-ski because an Aspen-like ski resort could be on our doorstep in a few years if John Barilaro gets his way https://t.co/I01z1kXq9x (4 hours ago)