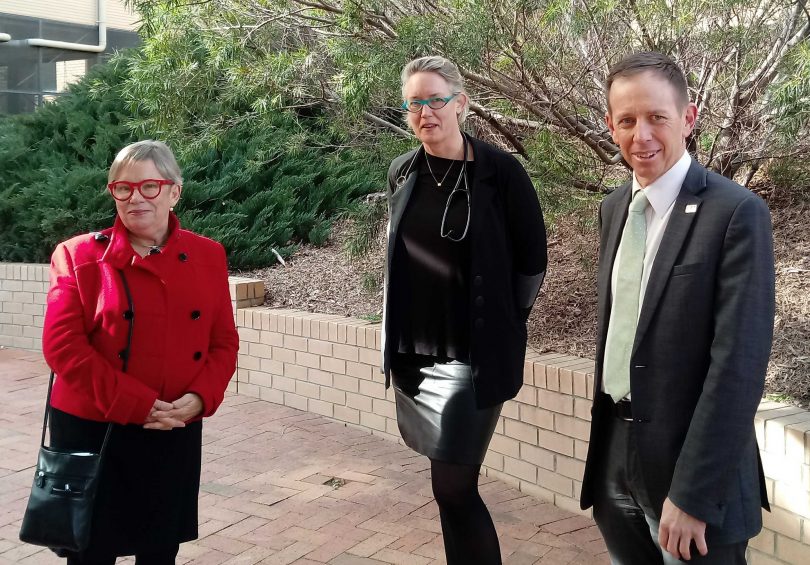 The $625 million Canberra Hospital Expansion will run completely on the ACT’s 100 per cent renewable electricity supply, dumping gas-fired heating and cooling from its design in a world-leading climate action initiative.

The ACT Government is expanding Canberra Hospital to include a new 40,000 square metre emergency, surgical and critical healthcare facility at the existing hospital campus in Woden, formerly known as the SPIRE project.

The new facility will use efficient all-electric heat pumps instead of gas turbines, saving 1886 tonnes of carbon dioxide being released into the atmosphere every year, equivalent to taking 760 cars off Canberra roads each year.

ACT Minister for Climate Change and Sustainability Shane Rattenbury said the move added $1.4 million to the cost of the project but was a significant step towards an emissions-free health sector, and continued to reflect the ACT’s world-leading action on climate change.

He said the extra cost was less than 0.5 per cent of the total cost of project.

”If we build in a marginal cost at the front end we can build in a significant climate saving that will play out over next 30 to 40 years.

”This is what real climate action looks like, it’s about taking these step-by-step measures to make sure we’re not building in a legacy for the next 30 years of running gas turbines in the basement of this facility,” Mr Rattenbury said.

It was a bold step, he said, that at first was met with resistance from those saying it couldn’t be done in a 24/7 hospital facility but one that now sets a standard for the ACT and the rest of Australia about what can be done if we take climate action seriously.

Mr Rattenbury said government consultants had not been able to identify a similar facility anywhere else in the world.

The government has committed in its recently released ACT Climate Change Strategy 2019-2025 to actions that ensure newly built government buildings are all-electric and emissions-free, as well as specifically to reducing emissions from ACT Health facilities. 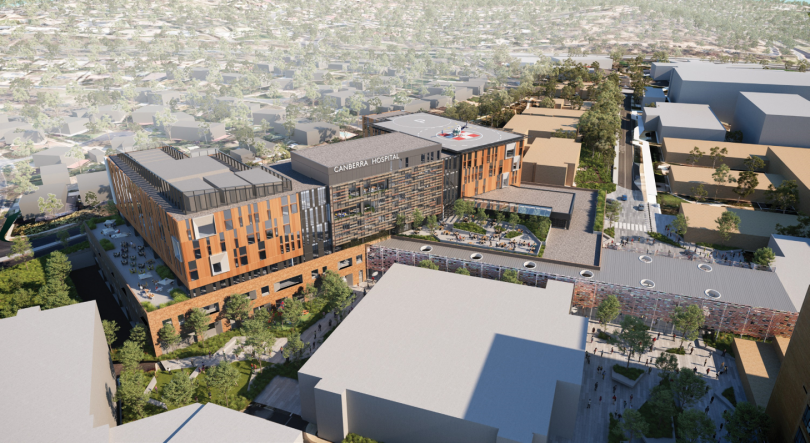 President of the Climate and Health Alliance Amanda Adrian praised the ACT’s leadership, saying it was a very strong lesson for other communities and jurisdictions.

She said 7 per cent of emissions in Australia were generated by the health system.

Ms Adrian attacked the lack of leadership from the Federal Government on the climate health emergency.

“It’s going to be a long, slow process,” she said.

Dr Arnagretta Hunter, a Canberra Hospital cardiologist also from Climate and Health Alliance, said the health ramifications of climate change would probably affect all of us at some stage.

”We know the health impacts of climate change because we lived through the horror Black Summer this year,” she said.

And the climate forecasts were showing that Australia would likely see more extreme temperatures and bushfires in the future.

”If the health industry can take the leadership in addressing our carbon footprint and heading to a zero-emissions platform as fast as possible then I think we can show that it is possible,” Dr Hunter said.

”We’re going to need to do things differently, we’re going to have to have room for imagination and I think we see this in the initiative that’s being taken with this new hospital design.”

Mr Rattenbury said the older parts of the hospital would continue to rely on gas but its use would be phased out over time.

Construction of the new facility will begin in 2021, and is expected to be completed in 2024.

So don’t bother trying to get treated in this hospital! The doors will be closed 90 ,,% of the time !

Virtue signalling on the world stage is sure to benefit the well-being of the average Canberran.

For me, I will be looking for another hospital where there are enough beds and medical staff to manage my problems without the worry of what happens when the wind stops and the sun sets.

This is why I am having gas disconnected from my house- not a green choice.
‘Consumers and businesses on Australia’s east coast are paying significantly more for gas than international customers buying its liquified natural gas (LNG) exports, the competition watchdog has found.‘

‘An interim report by the Australian Competition and Consumer Commission (ACCC) found domestic gas users were offered prices of between $8 to $11 a gigajoule in late 2019 and early this year.

By comparison, LNG exporters were selling to their north Asian customers for less than $6 a gigajoule by early 2020.’

The catch phrase “Australia first” sums it all. A government that is obsessed with prestige but won’t deliver on its promises

Currently utilising diesel generators due to problems with electrical supply.
Road lights currently switched off in separate part of Canberra for the exception of Ainslie, all due to power save.
Two years ago, Canberra went through numerous blackouts due to pro green energy policy.
Numerous businesses within the ACT cannot ‘cook’ without gas, simple. Yet many establishments have outdoor gas flames which are of not use.
The overwhelming medical community within the ACT and surrounds do not share you backwards views.
Face it people, the Greens and Labor are for the big developers, whom I can state two of are about to collapse.
The hospital has not expanded by more than 10% over the past nineteen years (same time Putin) has at least improved his country.
Renewable energy for such a facility is playing with people’s lives’, have some ‘heart’.
Out of interest a nuclear generator from the USS Gerald Ford class carrier, the latest US aircraft carrier can power a maximum of 139,000 homes in outer LA.

Great it’ll run on renewable energy if it’s actually built, wasn’t a promise made last election for the hospital expansion

Can someone please explain where is this 100% renewable electricity supply is coming from?? 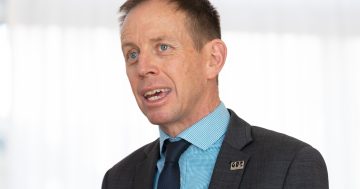