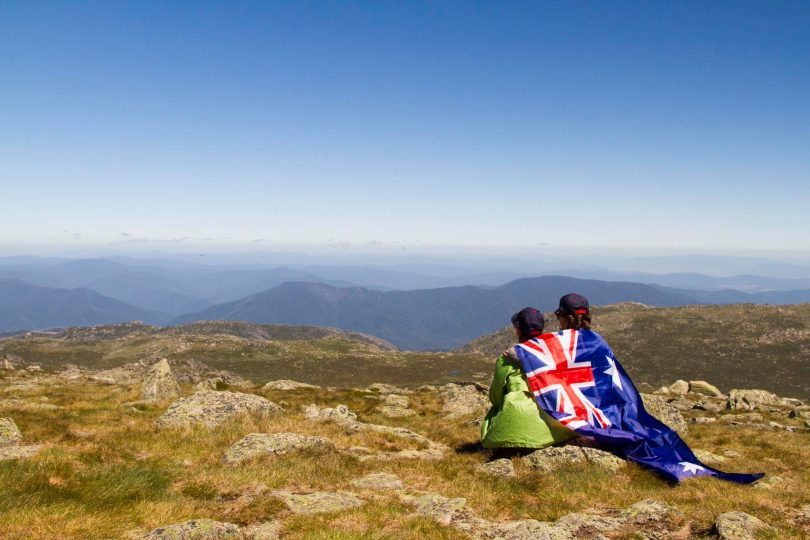 The mountains at Kosciuszko National Park provide a place to reflect and recuperate this Australia day. Picture: courtesy of Thredbo Resort.

If you’re in need of a nature getaway to beat the heat this long weekend, the mountains are calling.

“The highest temperature ever recorded on the top of Mount Kosciusko is 28 C,” laughs Susie Diver, Communications Manager for Thredbo Resort. “And the water in Thredbo River is always refreshingly cool.”

As part of an overarching push to encourage visitors to the mountains during the summer months, the resort has, for the last five years, held Australia Day events which include a group walk to Australia’s highest peak, along with Australia’s highest barbeque, and poetry at the peak. 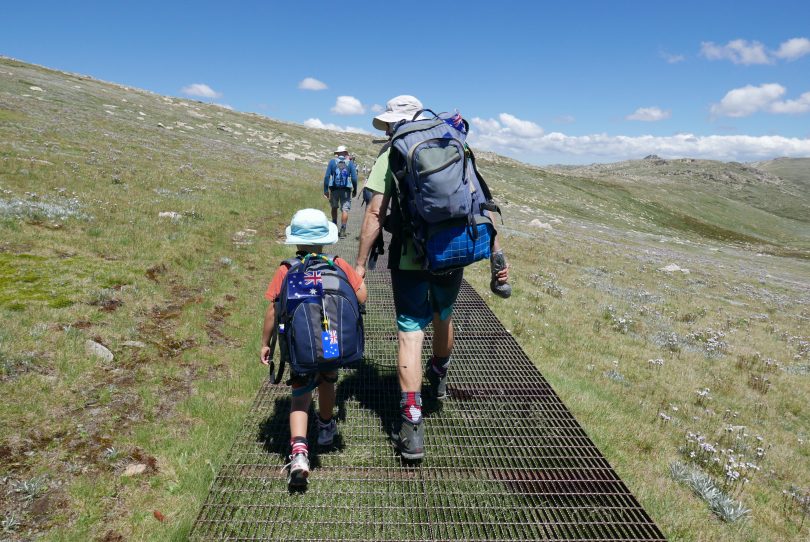 The 6 km walk up Mount Kosciuszko is achievable for people of all ages. Mount Kosciuszko was named for the Polish patriot and democratic leader Tadeusz Kosciuszko by the explorer Paul Edmund de Strzelecki in 1840. Some Aboriginal people refer to the mountain as Targangal. Photo: Thredbo Resort.

“Doing the easy 6km walk on Australia Day is a way to get back in touch with nature – but it’s not too extreme,” says Diver. “Anyone with an average fitness level can do the walk, so whole families often do it together, kids, grandparents and all.”

The concept of climbing ‘Kozzie on Aussie Day’ has taken off and become a bit of a bucket list item, says Donna Smith, Tourism and Events Manager for the Snowy Monaro Regional Council.

“We’ve certainly seen an increase in the amount of visitors year by year,” says Smith, “and an increase in the number of people climbing Mount Kosciuszko. It’s a really positive way to start the year, by achieving something you’ve wanted to do.” 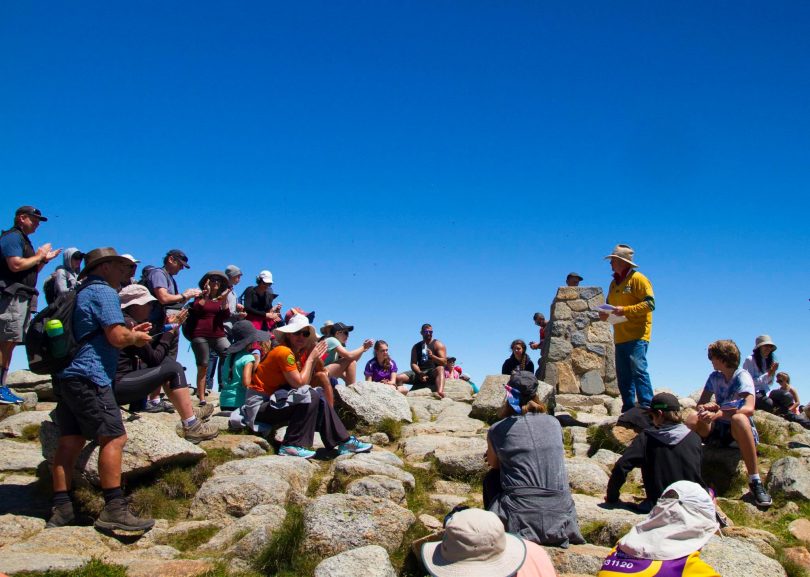 A crowd at the peak of Mount Kosciuszko listening to poetry. Photo: Thredbo Resort.

A desire to do “special things on special days” leads people up the mountain on Australia Day to listen to an orator reading The Man from Snowy River, “his booming voice echoing around the mountains,” adds Diver.

The resort offers guided walks during the summer months – not just on Australia Day – and also offers guided full-moon walks, which begin in the late afternoon and are completed using head torches or just the light of the moon. 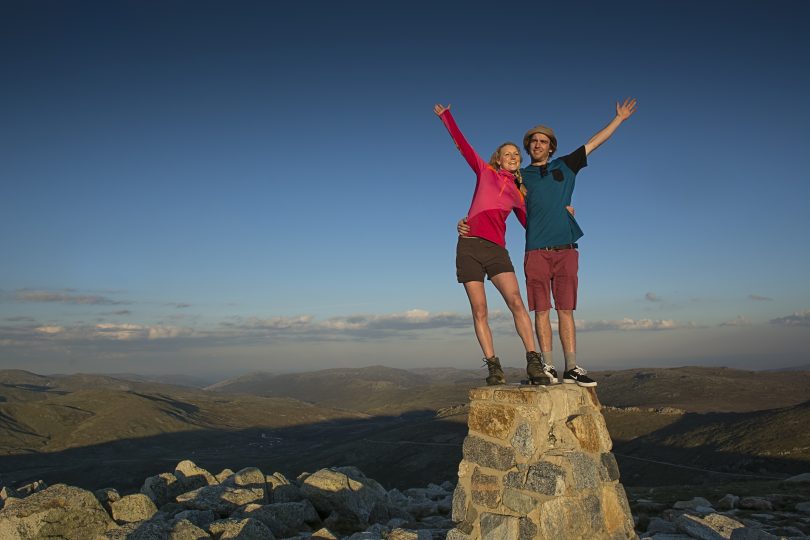 “The warmest temperature ever recorded in Thredbo Village is 33 C,” says Diver, “and we’ve already reached that twice this summer – it’s been a hot one!”

But according to Diver, even on the hottest summer days, you’ll find a “fresh, clean, green and most of all – cool” place to celebrate our sun-kissed country in Kosciuszko National Park.

For more information on the activities planned for Australia Day, check the Thredbo Resort website.

A little ironic to be listening to ‘Man from Snowy River’ at Mt Kosciuszko while the national park itself is being ruined by feral horses.

Daniel Oyston - 2 minutes ago
The one question to answer, which isn’t, is “How long will it take after the upgrade?” View
Avril Pounds - 11 minutes ago
I could walk to Sydney and still beat the train there. A fast train to Sydney is well overdue, but I doubt I'll see it in my... View
Jo Miles - 15 minutes ago
Alan Rose 38 minutes quicker. But I will take those 38 minutes of leg room, seat width, being able to walk about, lovely view... View
News 29

Malanie Barry Hudson - 17 minutes ago
Johno Bakker I know it’s been an uphill battle for a lot of the shop owners there.. I’ve done work for a few of the owner... View
Johno Bakker - 41 minutes ago
Malanie Barry Hudson they pretty much forced him out 😢 View
Steve Smith - 1 hour ago
James Heron they do a pretty good lunch. They are not the Jurassic Park they used to be. View
Property 12

Gabriel Spacca - 22 minutes ago
Recent news stories have highlighted the need for development to include green areas, and trees to mitigate the warming effec... View
Neenie Baines - 3 hours ago
Shiva Sapkota good points. Hoping it settles in once trees grow... not that there’s enough trees... View
Shiva Sapkota - 3 hours ago
Neenie Baines very true. When I see Molonglo from the height of Weston, all I can see is discussing units and townhouses cram... View
Sport 6

HiddenDragon - 1 hour ago
"....but we’re not really in a position to think properly about what those suburbs are going to be like 15 to 20 years down... View
Robin Dearlove - 2 hours ago
Yesssss! View
Roderick Saunders - 3 hours ago
Julie Maynard room for a deciduous tree and a double garage View
News 99

Rachael Lizars - 2 hours ago
Spending beautiful Canberra nights with my best friends, chanting A! C! WHAT? A! C! T! View
Craig Sutton - 5 hours ago
Watching David and Jayden Lewis win the Goodall Cup together. Now my son is a mad Brave fan and wants to win the Goodall Cup... View
Bohdan Brumerskyj - 6 hours ago
I still remember my first game. My wife, our friend, and I decided at midday on a Saturday to drive from nowra to Canberra to... View
Opinion 86

It should not have come as a surprise that the ACT Government would opt for a wire-free run to Commonwealth...
News 29

A development application to open a McDonald’s restaurant at Chisholm has been rejected by the ACT Planning and Land Authority (ACTPLA)....
News 24

Upgrading the Canberra to Sydney rail link so it can provide a faster service has been listed as a priority...
Opinion 21

Wildflowers, rivers and mountain air: Five picks for staying in the Snowies in warmer weather

A path towards the dual-naming of Mount Kosciuszko

Can Aussie sport take the heat?

Get your motor running for the Cooma Hill Climb this weekend

@The_RiotACT @The_RiotACT
Take the train to Sydney? Upgrading the Canberra to Sydney rail link so it can provide a faster service has been listed as a priority project by Infrastructure Australia https://t.co/2E03hw3qx5 (2 hours ago)

@The_RiotACT @The_RiotACT
ACTPLA's rejection of the proposal to open a McDonald's on the Chisholm Tavern site has been welcomed by local business owners, who say the plan had a significant effect on local business & highlights the issue of high rents at the shopping centre https://t.co/F3urPYbkXt (4 hours ago)