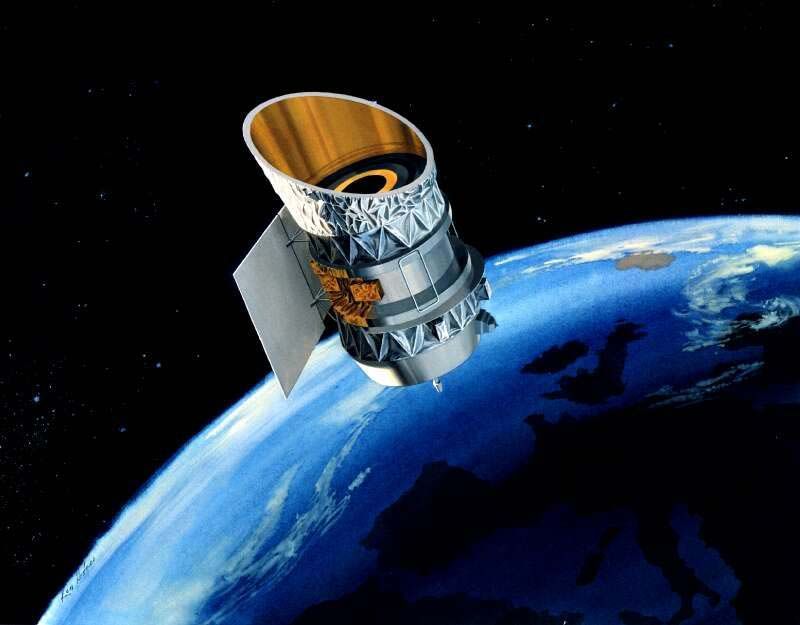 There has been a close encounter of the space junk kind as two large satellites have caused a potentially dangerous collision that has been watched by scientists around the world, as well as a researcher from the Australian National University.

Leading space expert and researcher at the ANU School of Astronomy and Astrophysics, Dr Brad Tucker, said the two pieces of old space junk have come within 15 to 30 metres of each other, which had the potential to rain debris in Earth’s orbit.

Dr Tucker said an old space telescope, the Infrared Astronomical Satellite (IRAS), had a near-miss with a decommissioned satellite, GGSE-4, on Thursday.

“This was a really close encounter,” Dr Tucker said.

According to LeoLabs, which tracks space debris, the prediction was a one in 100 chance of a collision and was described as one of the most dangerous possible collisions we’ve seen for some time.

“We are pleased to report that in the first several radar passes of the two objects after the close approach, we see no evidence of new debris. This event has served to highlight the collision risks caused by derelict satellites,” said LeoLabs via Twitter.

Dr Tucker said if the objects had collided, they could have produced tens of thousands of pieces of debris. LeoLabs predicted they would have smashed into each other over Pittsburgh in the United States.

“Currently, the US Air Force and other groups track objects up to about 10–15 centimetres wide.”

The Space Environment Research Centre (SERC), which has its headquarters at ANU’s Mount Stromlo campus, is working on tracking objects down to about one centimetre – of which there are hundreds of thousands currently orbiting the Earth.

“The centre is also working on using high-powered infrared lasers to push these small bits out of their current orbit and prevent future collisions,” Dr Tucker said. 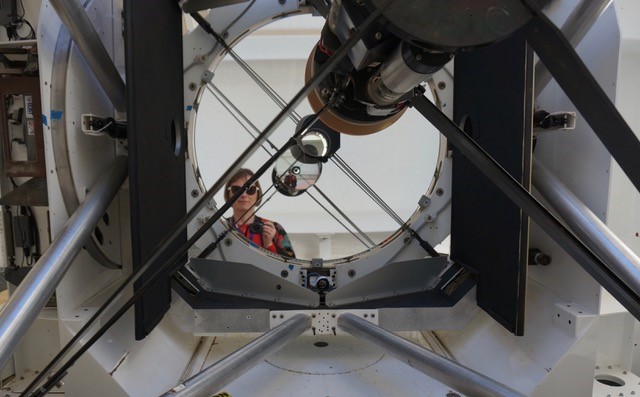 ANU Professor Celine d’Orgeville stands in front of the EOS 1.8-metre telescope at Mount Stromlo Observatory where her image is reflected an infinite amount of times by the two telescope mirrors. Photo: Supplied, ANU.

“A laser guide star creates an artificial star in a part of the sky where there is no bright star and allows astronomers and space scientists to make scientific measurements,” said Professor d’Orgeville, Adaptive Optics Group Manager at the ANU Research School of Astronomy and Astrophysics.

“In addition to laser guide stars, we use lasers to measure where the satellite or the debris is in space and predict where they’re going to be in future.

“Laser guide star adaptive optics were developed initially for ground-based astronomy but it was realised the same technology can be used to address the problem of space debris.”

The telescope is equipped with laser guide star adaptive optics developed by the ANU Research School of Astronomy and Astrophysics to increase the laser tracking station performance when tracking and imaging satellites.

We can't clean up our rubbish on earth so we send it up into space and create more rubbish for the universe to deal with...or not! We are creating our own demise, in every way!

They did investigate using lasers to change the trajectory of space junk a few years back. It is also worth noting that when the chinese demonstrated they had a missile that could hit and destroy a satellite.

They effectively also doubled the amount of volatile space junk in earth orbit that can now damage our commercial satellites.

The Government should tax it so doesn’t happen again

More alarmism. If the two spacecraft had collided, the smaller one would have been obliterated, producing a cloud of new debris. The larger one would have sustained some damage, producing even more debris. However, a collision poses absolutely no danger to us here on Earth because any debris de-orbiting will burn up harmlessly on atmospheric re-entry. It won’t even make it to the ground.

The space junk could have been set-alight?! 🥴

Bob Bz - 22 minutes ago
ACT needs to expand. Needs to plan, develop and build new town centers. View
bj_ACT - 2 hours ago
Just to cover off the people who haven’t been helped by the stamp duty switch (and Chewy, we know this is our main area of... View
James Forge - 2 hours ago
Modern houses would make better use of their piddly litttle blocks if the upper storey was allowed to be the same footprint a... View
event 1

Steph&michael Weber - 1 hour ago
Congratulations Sally and Rod for creating such a warm and welcoming venue in the midst of COVID. Your support of live music... View
News 2

bj_ACT - 1 hour ago
We’re agreeing too much Chewy ;-) When you have a system and government funded program that has just a two week life, you d... View
Public Sector 4

Capital Retro - 2 hours ago
I should have stated the obvious namely most service station sites have ample space for both solar panels and batteries but I... View
chewy14 - 7 hours ago
Capital Retro, You've missed the point. The idea of collocating the charging points at the PV/Battery sites is for efficiency... View
Capital Retro - 8 hours ago
What about the 100% renewables/emissions free government buys up all the abandoned service stations in the territory and conv... View
Property 10

Elyse Albrecht - 3 hours ago
Caleb Albrecht lol apparently you can win an auction even after the hammer goes down 🤷🏼‍♀️ View
Jose Vega - 3 hours ago
In Spain loans for your own home is tax deductible.... Investment loans are not... Majority live in their own home. View
Joel Suryawanshi - 5 hours ago
Sarah Young we are also forgetting that the greedy real estate agents are bumping up the prices and attracting investors from... View
Food & Wine 16

pink little birdie - 5 hours ago
Most of the start up support tends to be geared to that in the technology space or things with end consumer appeal. Most inno... View
News 4

ACT resident - 7 hours ago
Is this more spin from the lessee? ALDI at Fyshwick did not proceed because there are very stringent rules in the ACT regardi... View
show more show less
*Results are based on activity within last 7 days

Investigations are continuing into how a vehicle competing in the Finke Desert Race near Alice Springs left the course and...
News 72

The Canberra Liberals have lambasted the ACT Government for focusing on issues that don't affect Canberrans and trying to turn...
Business 60

UPDATE 11 June, 9:45 am: The ACT Government has announced that the ChooseCBR scheme has been paused for seven days...
Community 44

@The_RiotACT @The_RiotACT
The ACT is spearheading the national movement to raise the age of criminal responsibility to 14 in line with the United Nations threshold https://t.co/IvzMQbETcm (1 hour ago)

@The_RiotACT @The_RiotACT
A kitten found shot with multiple air rifle pellets in southern Canberra has fully recovered and been adopted by a local family https://t.co/uCziluwGXL (3 hours ago)

@The_RiotACT @The_RiotACT
Frugii Dessert Laboratory will close on 30 June, almost four months after the death of 'Mr Frugii'. Canberrans have been quick to share their fond memories of the iconic Braddon store https://t.co/EkZvUAF7dv (4 hours ago)