Cobargo blacksmith takes time to forge a bond with the public 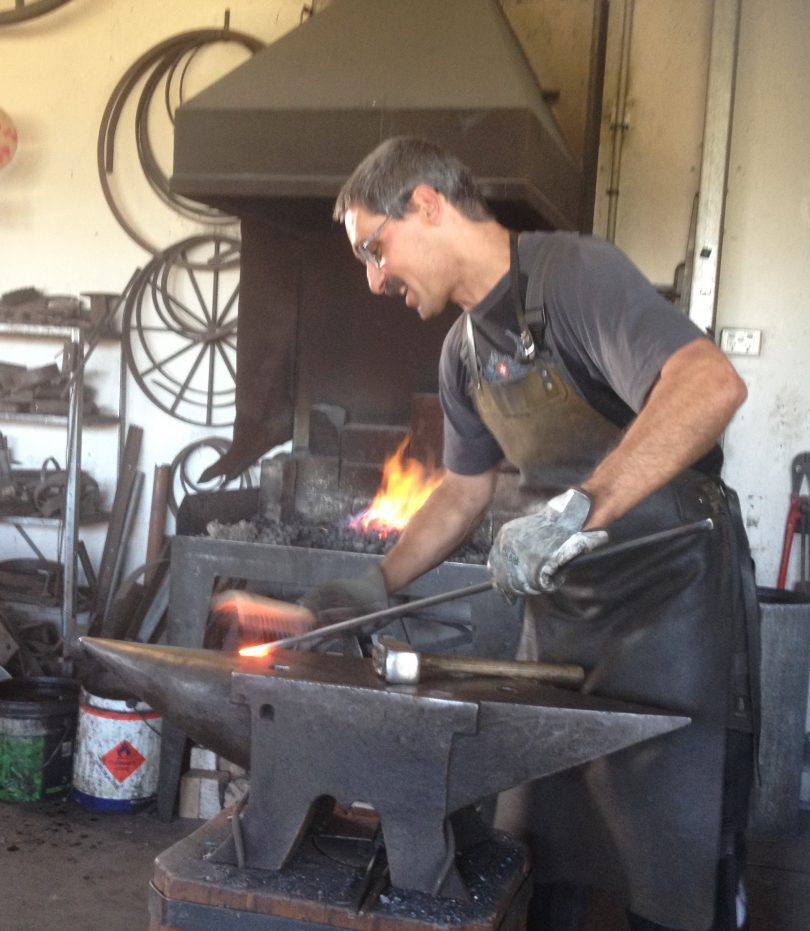 When Philippe Ravenel was fourteen and growing up in the Swiss village of Trélex, he went to Southern France and saw a blacksmith plaiting metal.

“I saw his work and thought: ‘that’s what I want to do,” Ravenel says during an open forge at his Cobargo property known as Galba Forge.

After completing four years at a trade school in Switzerland, Ravenel persisted with the French blacksmith, asking him, again and again, to show him metal plaiting.

“I had to wait 20 years until he would show me,” Ravenel says, laughing, “and finally when he retired, he did show me.” 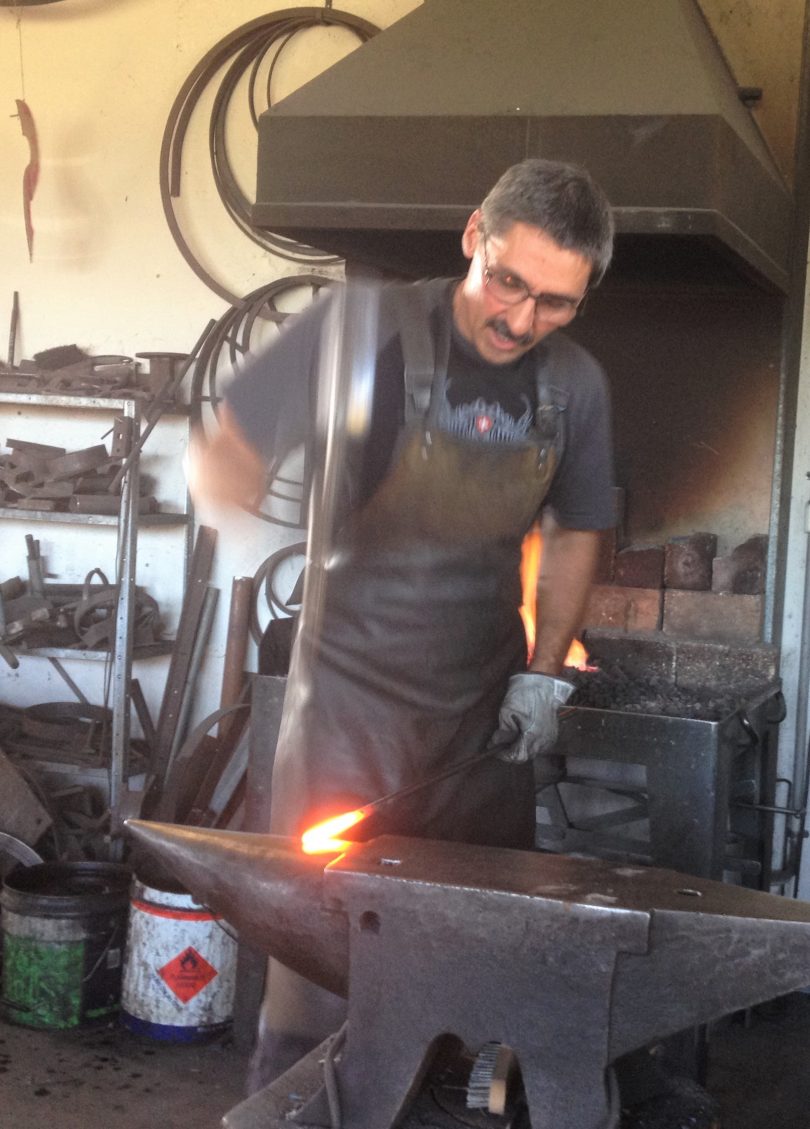 “You must let the hammer do the work” – Philippe Ravenel. Photo: Elka Wood.

Fine work and especially plaited metal is now Ravenel’s specialty and is used in the lamp mounts, fire pits, wood racks and fire pokers on display in his workshop.

Pursuing a career in the old trade of blacksmithing is just as unusual in Switzerland as it is here in Australia, where Ravenel made his home in 2004.

Although he attended a trade school [similar to a TAFE in Australia, Ravenel says, but industry-run] and learned a modern amalgamation of locksmithing/metal fabrication and boiler making, Ravenel has self-taught many of the skills he now practices.

“Blacksmithing is taught as a hobby in Australia,” Ravenel says “not as a trade and it’s similar in Switzerland. But I knew a lot of modern metalwork was making huge metal parts and I wanted to handle things with my hands, not a crane.” 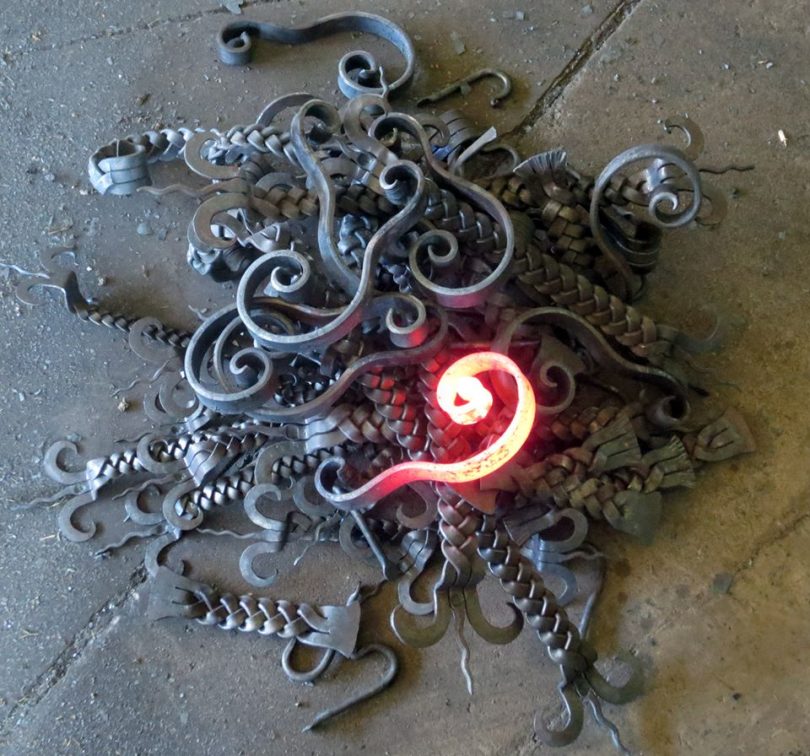 When Philippe Ravenel was fourteen and growing up in the Swiss village of Trelex, he went to Southern France and saw a blacksmith plaiting metal. Photo: Galba Forge Facebook.

Ravenel and his wife Marie Claude travelled in Australia and Asia when they were first married, taking a “two-year honeymoon,” and after a series of shorter trips to Australia they returned to Switzerland and felt that they wanted to “go home” to Australia.

In 2004, they moved to the Bega Valley, buying their current home on Wandella-Yowrie road, about 10 km out of Cobargo, in 2006.

“Europe was changing so much, it was so busy,” Marie Claude says.

“Too many people in Switzerland,” agrees Ravenel. 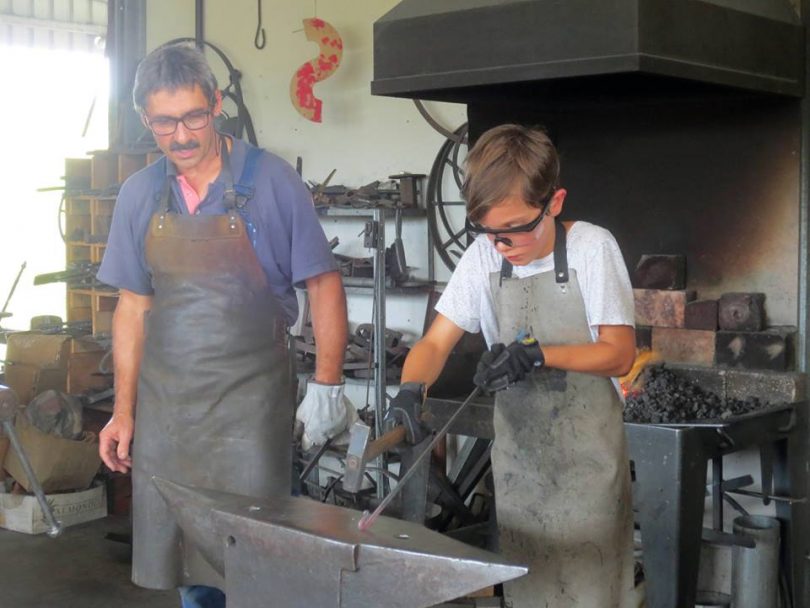 One thing was certain – Ravenel would continue his blacksmith work, whether in Switzerland or Australia.

As he demonstrates a forge weld to a couple visiting from Kiama, Ravenel’s blacksmith’s hammer dances on the anvil as he utilizes momentum to minimize the effort of lifting the hammer and bringing it down.

For every blow which lands on the metal he is forging, many more bounce off the anvil, creating a tapping tune.

“You must let the hammer do the work,” Ravenel says, “you are only there to guide it.”

The anvil Ravenel is working on dates from 1910 and was in the house Ravenel grew up in, a former Swiss blacksmith’s house, along with a huge vice which likely dates from the same period.

To move to Australia is one thing, but to bring an anvil? Ravenel laughs and deadpans “I brought it in hand luggage, of course. I had to ask the flight attendant to help me lift it into the overhead locker.”

Moving quickly and wearing a leather apron and thick gloves, Ravenel turns his back to the crowd to protect them from flying sparks when he hammers the gleaming hot metal.

Forming the point of a fire poker, Ravenel uses the round end of his anvil.

“It’s just like a rolling pin in pastry making,” he explains “the rounded surface thins the metal out as I hammer it.”

In order to make a twist in the same poker, Ravenel must heat the rod and pound it square.

“There is a twist within the twist,” he says, noting that many people don’t know that a twist would not show in a round rod.

The hot rod bends as he twists it, gripped in the vice, and he uses a soft lead hammer to straighten it up without leaving marks on the metal.

Ravenel’s forge is also Swiss, and came from the workshop of his former business partner, who retired.

“I had to move my workshop anyway, so why not to Australia?” Ravenel asks with a laugh. 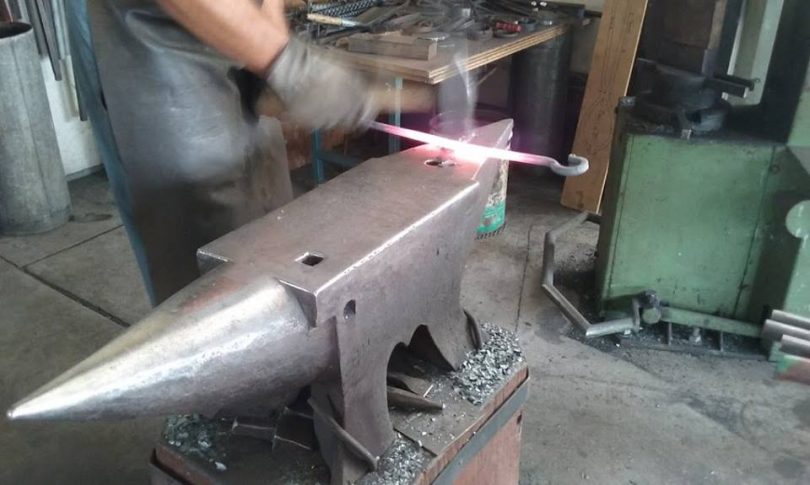 The anvil Ravenel is working on dates from 1910 and was in the house Ravenel grew up in. Photo: Galba Forge Facebook.

The forge burns coke, which is coal with some impurities burnt out and which Ravenel bought “truckloads” of from a Coalcliff coke works, near Wollongong, before it closed about five years ago.

The heat from that Coalcliff coke allows Ravenel to work most metal at between 900-1200 degrees.

Ravenel relies only on his senses and experience to know when to spring into action and pulls the steel rod he is working out of the fire frequently to check the colour.

“I try to work in the higher end of the temperature range because the metal is softer,” he says “but when you get that hot, there is always the risk of burning your work.”

A chart in his workshop shows the colours and associated temperatures of hot metal, ranging from black to yellow – steel is black even at 300 degrees, so Ravenel tentatively touches anything that has been in the forge.

“In blacksmithing terms, this is cold, but of course, it can burn you,” he explains. 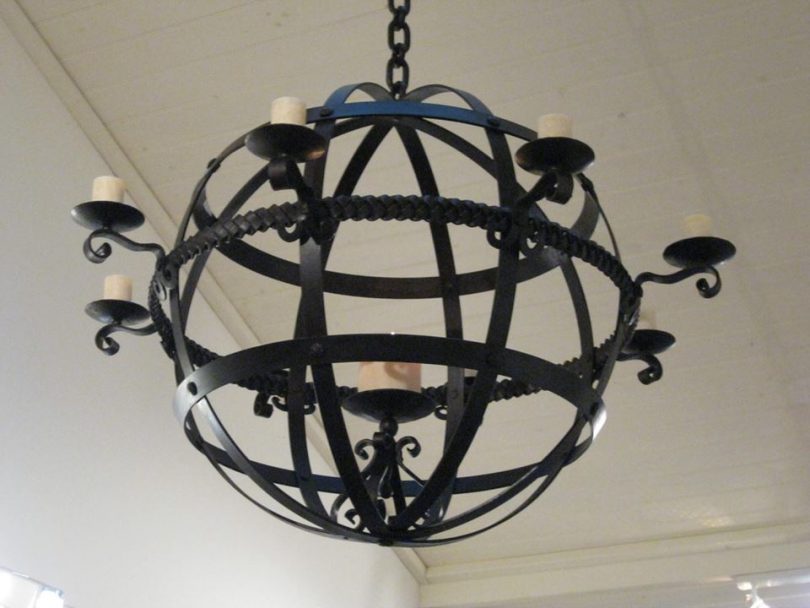 Ravenel can turn his craft to make a range of practical and sculptural pieces. Photo: Galba Forge Facebook.

But while Ravenel wants to keep alive, and share, the traditional trade of blacksmithing, holding regular open forge events for the last six years, he is not averse to using the industrial scale welder in his workshop.

“There is nothing wrong with using technology,” he says, although he was compelled to teach himself forge welding [which uses heat and force to join two pieces of metal] after arriving in Australia because so many people asked him about it.

“An old blacksmith would have done it [forge welding] with his eyes shut because he had no option,” Ravenel says.

“My grandfather used to say: ‘if you have to die, you might as well die in the evening because you can still learn something in the morning,” Ravenel says with a smile, moving back to the forge to check his fire, as is second nature to this blacksmith.

The next open forge event at Philippe Ravenel’s Galba Forge at Cobargo is December 9, entry is free between 1 pm and 5 pm.

Marc Blackmore - 21 minutes ago
Another scheme to disincentive investors into the market reducing supply and end result is more pressure on rent rates. The o... View
Jeffrey Brown - 26 minutes ago
It's a great idea. It should definately apply to a situation where the Landlord does not honor the Lease Agreement through th... View
Natasha Van Oudheusden - 27 minutes ago
Often the landlords are just normal people trying to provide for their families. How are they supposed to afford it? View
Community 8

Helping ACT - 24 minutes ago
Roseanne Howes I am proud of Slabsforheroes too. A history written by them couple of years ago. I am part of them.... View
Helping ACT - 29 minutes ago
Hi Jenny thank you. Let us keep helping. Humanity needs it. View
Jenny Mason - 1 hour ago
Congratulations and many thanks for all your hard work, for many, many year, Mohammed Ali!... View
News 23

Aaron Nicoli - 27 minutes ago
It’s also so much safer now… 60km/h jam brakes on for the camera, accelerate back out to 60… It’s achieved nothing fo... View
Phil Hogan - 1 hour ago
Got to pay for the tram 🙄 View
mark boast - 6 hours ago
Is a speed limit a “never exceed” or a permissible maximum plus/minus 10%? Cameras don’t image opinion. Time to move on... View
News 3