Around 384 kilograms of cocaine worth around $144 million in street value were discovered in the hydraulic boom of this excavator. Photos: Supplied.

The arrests of two Karabar men allegedly responsible for 384 kilograms of cocaine found inside an excavator highlights the importance of receiving tips from the community, Crime Stoppers ACT said.

A drug importation criminal syndicate which Border Force described as a “highly specialised and incredibly sophisticated” was brought undone by an anonymous tip-off from a concerned member of the community.

“This is a reason as to why providing anonymous tips can be important,” ACT Crime Stoppers’ chair Diana Forrester exclaimed. “That enormous collaboration intel that resulted in that bust this week shows that the community does have a role to play through providing tips to the police.”

Crime Stoppers has just wrapped up it’s Dob in a Dealer campaign, which encouraged people to anonymously provide information about anyone making, growing or selling drugs.

Ms Forrester said that while 300 might not sound like a lot, criminals operating in the ACT’s illegal drugs trade should start looking over their shoulders.

“300 might not sound like a lot, but it’s a very pleasing figure for such a small jurisdiction,” she told Region Media. “It only takes one call to make a big difference and it’s the quality not the quantity of the reports that are important. 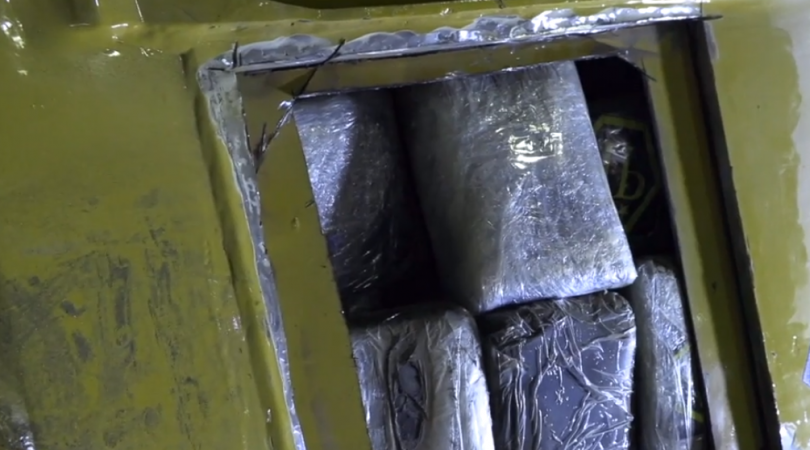 It took Border Force two days to extract the drugs from the excavator.

“Drug dealers are often hiding in plain sight within the community and are able to conduct their illicit trade unchallenged because people are often too scared to speak out for fear of retaliation.

“Sometimes people are unsure if they have enough information to report and my response to that is anything that you know, even if it is a tiny thing, could be that critical missing piece of the puzzle.”

Ms Forrester said Monday’s massive cocaine bust showed that it is imperative to do everything possible to ensure ongoing disruption to the illegal drug trade.

“There is no doubt that the information that we have received during the campaign has directly led to police raids and investigations, resulting in large quantities of illegal drugs being seized,” she said.

“It’s also common for weapons to be seized from drug dealing criminals during raids, as well as stolen property and large quantities of cash from the proceeds of drug deals.

“And while every piece of information can make a real difference, it’s important to understand that information provided to police via Crime Stoppers may achieve an immediate result or can also form part of longer-term investigations.

“There has still got to be people in the community who know more about the cocaine drug bust. Somebody else knows something else and we want that information to be reported to Crime Stoppers because that will help ACT Policing.”

Police are urging the community to come forward and report any information about criminals or criminal activity, including the crime syndicate, by contacting Crime Stoppers on 1800 333 000, or via the Crime Stoppers ACT website. Information can be provided anonymously.

Dean Carlson - 12 hours ago
Don’t let a noisy minority say they're talking on behalf of the town. This school is desperately needed and the proposed si... View
Kristy Norwood - 14 hours ago
I am 100% for the high school and it's location, as for the park it's government owned and they will do as they need, if they... View
savebungendorepark - 1 day ago
We should be clear. This isn't about "us against them". Virtually everyone who's campaigning to save the Park supports a high... View
News 8