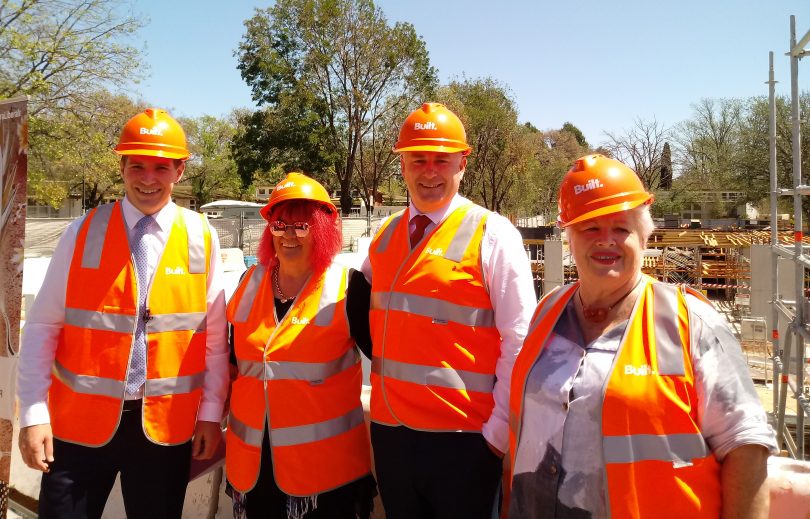 The Canberra Liberals have committed $4.5 million – if elected – to funding the build and fit-out of two dental suites at the new Winnunga Nimmityjah Aboriginal Health and Community Services centre at Narrabundah currently under construction.

The ACT Government granted $13.5 million for the construction of Winnunga’s new purpose-built facility after a bidding war at the last ACT election, but it will require the extra funding for the planned expansion of dental services, currently limited to one chair in the old building.

At an event on the construction site on Thursday (27 February), Winnunga CEO Julie Tongs said she hoped the commitment would receive tripartisan support from the ACT’s main parties.

But Health Minister Rachel Stephen-Smith said she wanted to see more details of the Liberal proposal before committing to the funding, about which the ACT Government was already negotiating with the Commonwealth.

“Our view has been that the Commonwealth should contribute this additional funding as the main funder of Winnunga’s services and in line with its responsibility for primary care,” she said.

“I formally wrote to [Federal Health Minister] Greg Hunt on 10 February seeking the Commonwealth’s commitment to this funding and we have had a number of productive conversations since then. I am optimistic that we will have more to say about this in the near future.”

In the meantime, Opposition Leader Alistair Coe is making the running, saying there was a need for additional investment at Winnunga, which services 7000 clients in the ACT and across the region.

He said Indigenous health was going backwards in the ACT and governments needed to do all they could to improve outcomes.

He said investing early in dental health would mean real returns for the community, saying many emergency department presentations were linked in one way or another to dental health.

“If you get these dental services right you can actually relieve pressure on emergency departments,” he said.

But he was cagey about whether this would be part of an extra funding commitment overall to the health system about which the Liberals have been so critical, or where any extra money would come from.

“We do think there are additional resources needed in the health system but we also have to be mindful of the fact that we shouldn’t just be throwing money at the health system, ” he said. “We’ve got to make sure that money is being spent wisely and we’re properly empowering the staff.

“More money is not necessarily the answer. You can spend money well and spend money poorly. That’s why you’ve got to get it right.”

Ms Tongs is only too grateful for a funding commitment that would not only establish expanded dental services, but free up space and resources in the old building for other services such as a child care service for children at risk.

She said her community had a lot of very young children that needed dental care, with many having to have teeth removed.

“We are desperate for more dental chairs and facilities,” she said. “Without that $4.5 million commitment, we would have a cold shell on the first floor and continue to have only one room,” she said.

Winnunga offers multi-disciplinary, holistic health care and the new building designed by architects, Judd Studio, reflects that inter-related approach so services are not siloed off from each other.

Let's hope it happens. Another way would be for the current Government to do it. Now.

Bridget Trussler - 40 minutes ago
My son many years ago went head into the pole. Please get rid of it before someone is killed...... View
Claire Anderson - 2 hours ago
Daniel, the newer ones really do stop way WAY more abruptly. I too rode the old ones with help of people pulling and never go... View
James Coleman - 2 hours ago
Hi Kane P-s and Bec Lester , the journalist behind the article here - just about to send you each a DM concerning your storie... View
News 13

chewy14 - 1 hour ago
Kenbehrens, "potentially safer". We are all "potentially safer" if we never leave the house either, but luckily most of us un... View
JC - 1 hour ago
Chewy in this instance it is NSW who is doing something different and did so without consulting or advising the ACT who is im... View
chewy14 - 1 hour ago
You do have to laugh at their statements about "being more comfortable" with further changes because of the high Vax rates. T... View
Opinion 85