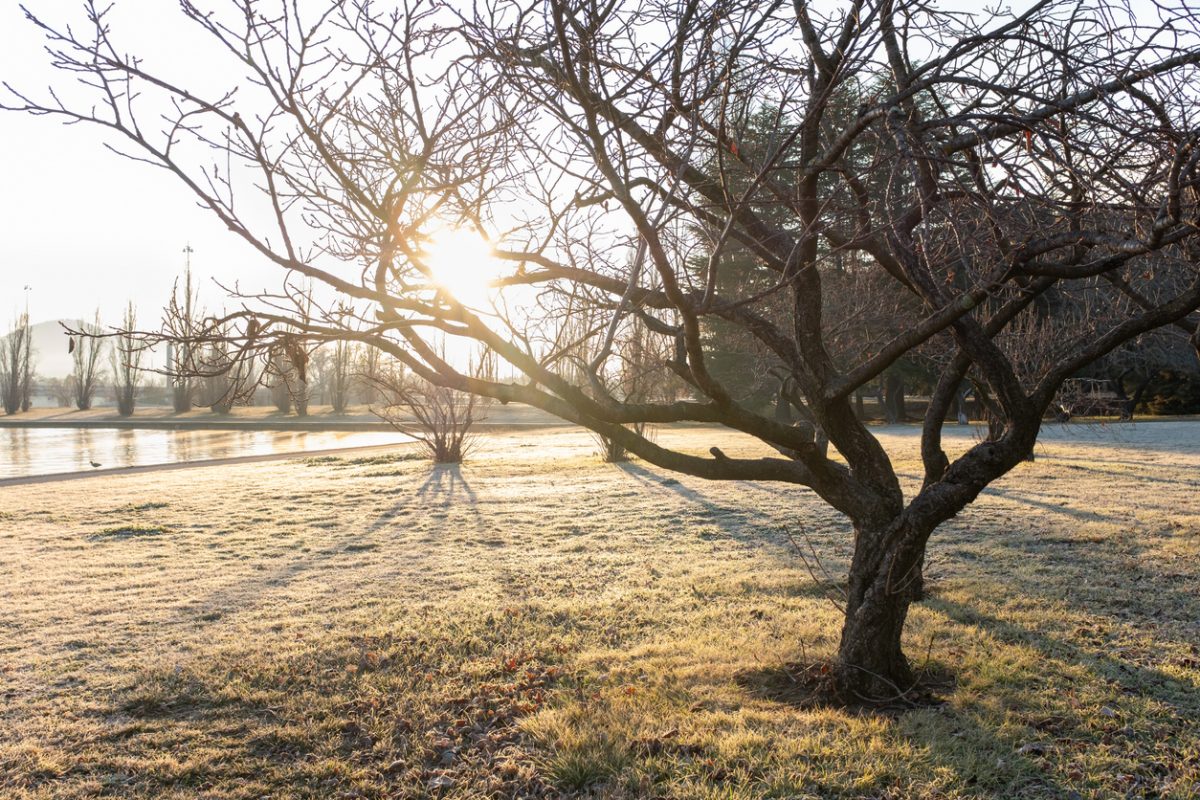 On average, Canberra and surrounds had a frostier and drier June than usual. Photo: File.

The beginning of winter came with a bang – Canberra and its surrounds haven’t seen a June this cold for decades.

The Capital saw its coldest start to a June day since 2015 on 28 June, with a minimum of minus 6 degrees at the Canberra airport just before 7 am.

Weatherzone’s Anthony Sharwood said the year’s previous coldest morning was minus 4.5 degrees on 15 June, but that was nowhere near the coldest the Capital has ever felt.

“For those who love records, the national capital’s coldest recorded temp was minus 10 degrees in July 1971,” he said.

“[But on 28 June] Australia’s coldest overnight temps were all in the mountains and tablelands in southern NSW near Canberra, with the mercury bottoming out at minus 8.1 at Cooma Airport.”

“Settled conditions at the start and end of the month resulted in some particularly cold nights,” its climate summary stated.

“Daytime temperatures were [also] particularly cool for the first half of the month, as a strong south-westerly flow covered most of south-eastern Australia.”

This was the tenth consecutive month where the mean maximum temperature at Canberra Airport was below the average at the current site.

The warmest day was on 24 June when the mercury reached 14.8 degrees. But this marked the first June since 1993 when Canberra Airport did not reach at least 15 degrees.

While we’ve seen plenty of rain throughout 2022, June was actually drier than average for the Capital.

For the ACT as a whole, June rainfall was 36 per cent below the 1961-1990 average, which is just the second month since October 2021 that’s experienced below-average rain.

“Most of the rain for the month fell between 5 and 8 June, from the passage of a series of cold fronts,” the BOM said.

Weather records were broken in the surrounding regions of NSW as well.

Cabramurra in the mountains had its lowest June mean temperature in 25 years of records, averaging out its maximums and minimums to just 0.9 degrees. The previous record was 1.7 degrees in 2007.

Cooma was freezing as well, seeing its coldest June mean daily minimum for at least 20 years. Both the visitors centre and airport sites recorded colder-than-average minimum temperatures for the month, with Cooma Visitors Centre equalling its 1992 record of minus 3.2 degrees and the airport just edging out its 2000 record with an average minimum of minus 2.7 degrees.

A series of cold fronts during the first week of June brought snowfall as low as 800 metres over the Snowy Mountains, leading to some resorts opening early.

This also resulted in the Perisher Valley taking the prize of wettest June in NSW, recording 229.6 mm throughout the month.

“comparative readings from 30 years ago … proves nothing has changed” Capital Retro 4:22 pm 07 Jul

The four phases of denial:
1. It isn’t happening.
2. If it is happening, there is nothing we can do about it (it is nothing to do with us).
3. If we could do anything, it would be too expensive to do it so is not worth the attempt.
4. Claim credit for whatever was done.

Capital Retro has managed to reach only stage 2. Many of his ilk are already at 3, perhaps making their plans for 4.

Ok, climate change is real, but last summer wasn’t hot and this winter, the low daytime temperatures have given a new meaning to “feels like”.

I have never argued that climate change wasn’t real but claiming that it is caused by man-made intervention is just an unproven scientific theory fueled by the renewable industry and their gullible followers.

CR, what is your explanation for scientists pointing out the threat of anthropomorhic client change before a “renewable industry” existed, and whose hypotheses have been supported in subsequent research?

“fueled by the renewable industry and their gullible followers.”

Ironic CR, when the main advantage of renewables is that they don’t require fuel in the usual sense of the word.

Also LOL at you of all people calling others “gullible”.

And you answer to my question, CR, typos and auto-correct managed?

I had to clean ice off my car’s windscreen the other day.

Clearly proof that those egg head climate scientists are part of a global conspiracy and climate change isn’t real.

Or if it is, it’s all part of natural cycles, probably driven by the sun or crystal energies or the gravitational pull of Jupiter’s third moon.

Nothing to do with humans at all.

The beginning of winter came with a bang – Canberra and its surrounds haven’t seen a June this cold for decades. The Capital saw its coldest start to a June day since 2015 …

The grass around the rural parts are definitely browner.

Astrid Smith Oh yes, those areas definitely would be given they are in a rain shadow – I was thinking of areas a bit further north haha

Hugh Hagan it has been pretty dry in the southern parts for sure.

Not much better on the Gold Coast.

Mmm. What was labelled “global warming” 15 years ago has endured several name changes until now when the current one is (man made) “climate change” but it’s also currently getting colder.

Scientific theory may be settled but the facts are my energy consumption to keep warm (highest ever last month) is increasing in the winter months and the summers are getting cooler – I didn’t even switch my A/C onto to summer cycle last year.

As the BOM stated about last month: “The warmest day was on 24 June when the mercury reached 14.8 degrees. But this marked the first June since 1993 when Canberra Airport did not reach at least 15 degrees.”

“Climate change / global warming” hadn’t even been invented 30 years ago so what we are seeing is the same averages like glaciers growing and retreating every 30 years.

I used to wonder if you tried to be controversial on here to get a rise out of people, Capital Retro. Then I recognised that you actually do believe the denialist garbage you sprout. Surely, you realise that every time you make one of your denialist statements, that someone is going to “fact check” it?

Your latest fallacy is that ““Climate change / global warming” hadn’t even been invented 30 years ago … “.
WRONG – https://science.anu.edu.au/news-events/news/how-we-discovered-climate-problem

Then you give us your totally unsubstantiated false claim: “… we are seeing is the same averages like glaciers growing and retreating every 30 years.”
WRONG – glaciers are melting at an alarming rate https://www.nationalgeographic.com/environment/article/big-thaw AND https://www.epa.gov/climate-indicators/climate-change-indicators-glaciers
As the ‘big thaw’ article says “Things that normally happen in geologic time are happening during the span of a human lifetime” – (geologic time: https://www.thoughtco.com/eras-of-the-geologic-time-scale-1224551)

Oh and I’m sure you’ve been told this before but weather and climate are not the same – yet you continue to confuse the two. So while the weather may be showing it’s cold at the moment – climate science is showing us that the earth is warming https://climate.nasa.gov/evidence/

Happy reading – maybe one day you will join the rest of us in the 21st Century.

I think you’ll find greenhouse gases and their heat trapping effects were first researched and theorised in 1855, and presented publicly in 1856.
https://en.wikipedia.org/wiki/Eunice_Newton_Foote

iirc the global warming moniker, while more accurate, was conceptually incomprehensible to many people so they changed the name to climate change so the people who say things like “it has never been colder in my town!” can hopefully distinguish between changing climate, and weather. It doesn’t always work ????

If you believe what the IPCC scientists funded by the unelected UN say JS that’s you problem.

My facts result from what I can see, feel and touch and the BOM is backing me this time.

Doesn’t know the difference between the weather and the climate. Just be an interesting existence.

No, CapitalRetro, the BoM is not backing your denialism, it is giving you the weather report.

Oh and PS, CapitalRetro. I’ll definitely believe the scientists from IPCC (irrespective of who funds them) over your denialist champion, Alan Jones, the best best social commentator money can buy

Hello CR, you said the BOM is backing you. Have you asked them? Just to be sure of their full support for what Capital Retro can see, feel, and touch. They could save quite a lot on super-computers, and on their unpaid research contributions to the IPCC panel. The world of science is waiting to touch the hem of your robe, and if you have a few spare minutes, would you mind knocking up the design and calculations for the new Molonglo bridge? It would be handy.

Unlike you JS, I can think for myself and I don’t need people like the IPCC to tell me to follow their narrative. And Alan Jones was never my “denialist champion” and he has retired however he was a brilliant commentator.

Yes, CR, thinking for yourself is a real convenience, rather than arguing the science, where you might actually have to think about the issue.

… and Alan Jones did not retire – he was sacked, i.e. his last remaining contract, after 2GB sacked him, was with Sky who did not renew his contract.

Plus comparative readings from 30 years ago which proves nothing has changed.

You must have watched Alan Jones very often JS because you know more about him than I do.

He made a lot of great challenges to the narrative, didn’t he?

Cr wrote, “He made a lot of great challenges to the narrative”

Actually, Capital Retro, I’ve never watched Alan Jones – listened to him once, several decades ago and that was enough. I have certainly heard second hand about his sacking.

If I may I will extend phydeaux’s question to you around your comment that “He made a lot of great challenges to the narrative …” – name one ‘challenge to the narrative’ made by Alan Jones, for which he wasn’t well compensated?

As we know, Alan Jones was the best social consience money can buy. 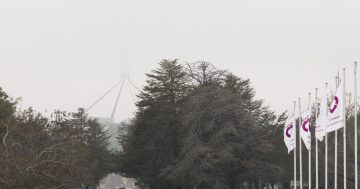