Comments called for on the ACT Strategic Bushfire Management Plan 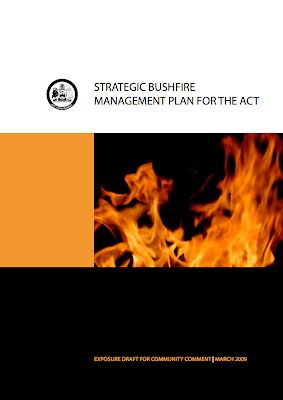 The ACT Government has had a Strategic Bushfire Management Plan since 2005.

The Emergency Services Agency have now announced that they’re reviewing it and would like your thoughts.

There’s an exposure draft to check out if you have an interest.

Comments on this Exposure Draft can be addressed to:

I guess they won’t be reviewing this.

As a side note, there is a difference between being “alarmed”, and being fearful. Alarmed is the worry you feel when being told of a risk to your wellbeing. “Fear” which is what the Governments didnt want to raise, is what you experience when you are running from the fire that you were never alarmed about!

The fire event was envisaged by a bunch of us on a weather forum, 2 weeks before the fires hit. In fact, me and a Qbn firie predicted the entire situation, never thinking that it would be allowed to happen. We figured all the highly-paid official experts would do something about them.

Heres a comment. Twenty years ago in College, I did a unit in Geography (double majors)called Natural Distasters. In that unit, I distinctly remember learning that the two worst possible disters that faced the Canberra City were A)Flooding of the entire central Canbera region all the way up to Dickson 1 meter deep, should the Googong Dam be blown up, or fail, and B) a mega fire coming in from the west and flanking the entire City. After the 2003 ACT Bushfires, all the ACT Government could bang on about, is how this was “an event that no-one envisaged”. Crap… I learnt about it in a Public College, in a course sanctioned and funded by the ACT Government. How could it not be envisaged then. From, educated, but confused!

Annie Wyer - 36 minutes ago
Mark Ryan actually no, I don’t. But it sounds like you’re a liberal voter who hates contributing towards the common good,... View
Margaret Freemantle - 59 minutes ago
Got to be kidding to vote Libs in Canberra!! View
Mark Ryan - 4 hours ago
Annie Wyer sounds like you know someone who got let go from an over inflated over funded lazy parks n gardens service. Vital... View
News 4

@The_RiotACT @The_RiotACT
From an all-local lineup bushfire benefit show to Abbey Road Live, here are the gigs worth catching in #Canberra this week https://t.co/ga0VbqGlcI (43 minutes ago)

@The_RiotACT @The_RiotACT
Bushfire relief will be a key part of this year's National Folk Festival, with a special concert and fundraising efforts across the Easter weekend https://t.co/is6ZDoRlZA (2 hours ago)